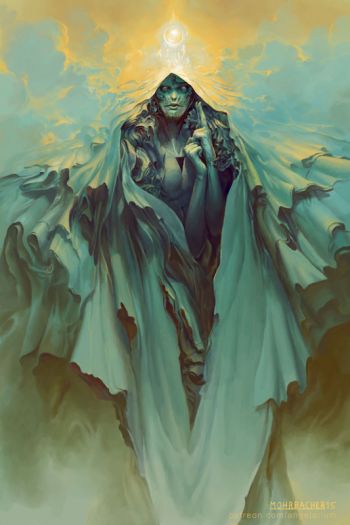 The Lantern of Heaven, Light of Righteousness
Abbridon is an angelic higher being associated with order and truth, called upon for magic associated with revealing the truth or banishing darkness and deception. He is often depicted as a cloaked figure limned with a brilliant halo. Sometimes addressed as “The Abbridon,” some mystics have suggested Abbridon may be a multifaceted entity or collective class of higher angelic beings, perhaps even an office held by one of them. Abbridon is also one of the three entities making up the mystic trinity of the Modrossus, along with Heshem and Lamal.

A spell to counteract darkness, bindings, and malevolent summoned creatures.

This spell calls forth a magical shield to protect the caster. The Aegis is one of the most commonly defended defensive spells; even a novice mystic usually knows how to conjure one.

A spell that banishes all concealing, obscuring, or illusory effects.

This spell creates mystical "sensors" for the caster to scry.

A simple spell for creating light as bright as normal daylight, although such light can also affect creatures specifically vulnerable to it.