One of the Houses that nearly disappeared during the Wailing Years, for a while there were no Ammakyls in Waterdeep. Many of the main branch of the family were killed by the Spellplague and the chaos that followed. Then, in the 1450s DR, the herald Falconfree sent inquiries around to known branches of the family. According to the geneaologies, the rightful inheritors of the Ammakyl title were the branch of the family that had fled to Turmish. When the family returned, Waterdeep was scandalized to learn that most of the family were Turami half-elves, although they quickly settled into Waterdeep's society.

The main branch of House Ammakyl is mainly made up of Turami half-elves, from where Ammakyl nobles commingled with both elven allies in Turmish. 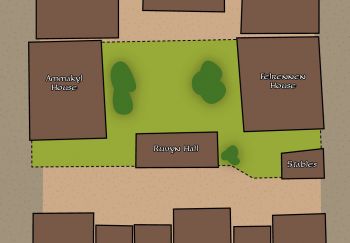 Shield Street, Sea Ward
A tall fieldstone wall topped by simple silvery half-domes inset into the stone of the wall, the wall which protects the Ammakyl villa is enchanted. During thunderstorms, neighbors are treated to a show of multiple lightning strikes striking the wall's height, where the small spheres inset into the wall glow with an ethereal light. Those attempting to scale the wall are treated to a dose of that stored lightning, along with a crack of thunder that serves as an alarm.

House Ammakyl maintains a number of farms in the settlement of Amphail.

House Ammakyl also maintains a variety of vineyards in Turmish, as well as trade routes to and from that nation.

Scions and agents of House Ammakyl in good standing might receive the following benefits: