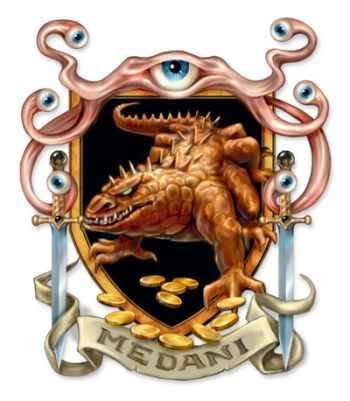 Of the dragonmarked houses, House Medani has the lowest profile - and that's how the house's heirs prefer it. The half-elves of Medani bear the Mark of Detection. Through the Warning Guild, they offer their services as bodyguards, inquisitives, and sentries to clients across Khorvaire.

Until the recent appearance of House Tarkanan, Medani was the youngest of the dragonmarked houses to originate within the Five nations, with the Mark of Detection appearing only shortly before the War of the Mark. The Medani families banded together in pre-Galifar Breland prior to that conflict, but had few aspirations beyond being left alone. Only in the aftermath of the War of the Mark did Medani's elders bow to the pressure of the other houses and take their place among the dragonmarked.

Despite other strained relations with the other houses, Medani's collective voice carries weight. The house's warnings are ignored at the listener's peril, but Medani's iconclastic nature makes it sometimes difficult to work with.

Though any number of organizations might claim a lock on the truth, House Medani can back that claim. Those who possess Medani's mark can sense arcane and divine power, the taint of poison, unseen intruders, or magical observation from a world away. All Medani heirs train in the use of logic, perception, and techniques for assembling fragments of evidence into a recognizable whole. As allies, they are formidable; as enemies, even more so.

The Medani alliance existed before Galifar: a collection of families based in the former Medani provinces of what would one day become Breland. Already accustomed to blending into human or elf society, the half-elves of the Medani concealed their dragonmarks when they first appeared. A close-knit society, they were content to use the Mark of Detection quietly, building a reputation as bodyguards and scouts while attempting to avoid the growing conflicts of the other dragonmarked.

House Cannith discovered Medani partway through the War of the Mark. At first, it was thought that the Mark of Detection might simply be a prevalent aberrant dragonmark, but that conjecture was quickly discarded. Cannith finally tracked down the elders of the Medani families and convinced them (some say threatened) to take their place alongside the other dragonmarked houses.

Even today, distaste for authority runs strong in the Medani, giving rise to aloofness that many dragonmarked ascribe to the house. Medani is forthright in its views on house politics and is an active participant in the Twelve, but representatives of the other houses sometimes claim that House Medani works against their interests as often as it supports them.

By virtue of its geographic origins and current leadership, however, House Medani has a close relationship with the Brelish crown. The house is based in Wroat, and Baron Trelib is a long-standing friend of King Boranel. During the Last War, Medani maintained the same steadfast neutrality as the other dragonmarked houses. However, it is rumored that a good portion of the wartime intelligence directed to Breland from its allies in Zilargo might have originated with Medani - the house using connections of Sivis to assist its homeland while maintaining necessary secrecy.

Though the dragonmarked houses are directed to carry on their mercantile operations at a neutral distance from the nobility of the new Khorvaire, Trelib's close relationship with King Boranel often causes the house to deal more favorably with Breland than with the rest of the Five Nations. Trelib is known to have supplied a number of Medani operatives to Boranel's court, and is also charged with discovering who assassinated Boranel's first wife, Queen Chaseva. Those close to Trelib speak of his utter devotion to solving the murder, but all his efforts to date have proved fruitless.

Though this close relationship angers many outside Breland (nobles and dragonmarked alike), some Brelish have their own concerns. Within the King's Dark Lanterns, high-placed operatives wonder openly whehter Boranel is in fact being played by Medani - and whether Trelib's long years of friendship have enabled him to place deep-cover agents within the ranks of the Brelish court or the Lanterns themselves.

Though both Lyrandar and Medani are made up of half-elves, little love is lost between the two houses. Unlike Ghallanda and Jorasco, Lyrandar and Medani formed at different times, in different areas, and under very different circumstances. Lyrandar is ambitious and ostentatious, while Medani is focued and withdrawn. The former prides itself on its diplomacy and political acumen, while the latter has no fear of playing favorites.

Despite their dissimilar temperaments, the two houses have some common ground. A subtle disdain for those who feel entitled to power shows in their dealings with the other houses (particularly Cannith), and does a preferrence for working with the common folk of Khorvaire rather than the elite. On rare occassions, they have supported one another against initiatives among the houses and movements by the nobility to limit the power of the dragonmarked. Such alliances are short-lived, however, and often conveniently forgotten.

House Medani and the Warning Guild are synonymous in the minds of many Khorvairians, few of whom realize the degree of official separation that stands between them. Rather than a simple extension of the house, the Warning Guild has grown into an affiliatied but largey independent entity. The Mark of Detection often leads to meddling in unpleasant affairs; official separation keeps the house at a safe distance whenever the unpleasantness turns out to be involve the nobility or the dragonmarked houses themselves.

While the Warning Guild provides valuable experience and training for its members, House Medani's ministers realize that not everyone's gifts are best suited to that path. Heirs and house members whose skills lie elsewhere are encouraged to pursue them, as long as those pursuits benefit the house eventually.

The Warning Guild provides certification and contract employment for bodyguards, inquisitives, and sentries across Khorvaire, though the bulk of its work is in the larger cities. Bodyguards in Khorvaire can be hired from any number of sources, but those of the Warning Guild are not hired primarily for their muscle or skill with a blade. Rather, House Medani specializes in anticipating attacks and preventing them before strength and steel are ever needed.

The guild has enclaves throughout the Five Nations, but they are always small and unmarked. If a potential guild member can't find the place on her own, that doesn't bode well for her future in that line of work.

In keeping with its role as a house of counterspies, Medani keeps a low profile even in its ancestral home in Wroat. The Medani enclave is a connected network of unmarked buildings within sight of Brokenblade Castle and Parliament Hall. It is not marked on any map, and those not already aware of its existence would be hard-pressed to pick its well-guarded doors out from among the private apartments and shops that surround it.

The Tower of Inquisition, Medani's center of interrogation and incarceration, is the only part of the enclave known by name among the other dragonmarked houses. A nondescript stone building overlooking the river, it is said to be as well guarded as Brokenblade Castle itself. Underground passages and permanent dimension doors are said to connect the tower and the castle, created so that the enclave might be used as a secret refuge in the Last War, but this rumor has never been confirmed.

In addition to its ancestral hold, House Medani maintains enclaves in Fairhaven, Flamekeep, Korth, Sharn, and Trolanport. It has smaller centers in Newthrone, Pylas Talaear, Stormreach, Taer Valaestas, and Varna. Medani outposts can be found in smaller cities across Khorvaire, including Rhukaan Draal in Darguun.