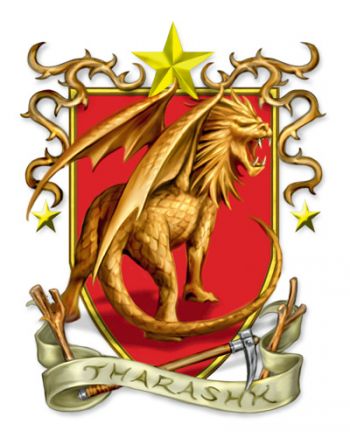 House Tharashk carries the Mark of Finding, and its powers allow Tharashk heirs to track lost relics and living creatures alike. The ancestors of the house were savage hunters who drew on the power of their marks to track prey through the murky depths of the Shadow Marches. The spirit of the hunter lives on in the house today. Though one of the youngest houses, Tharashk possesses a vibrant competitive spirit that drives its efforts to increase its influence.

For thousands of years, the Shadow Marches were the domain of the orcs. It was a land scarred by the ancient conflict with the daelkyr, where the descendants of the first Gatekeepers and those corrupted by the touch of Xoriat continued to battle in the darkness. Fifteen hundred years ago, humans comae to the Shadow Marches: refugees from the distant land of Sarlona fleeing the growing power of the Inspired. Though many of the orcs of the Marches met the first waves of settlers with hostility, a handful of tribes welcomed these strangers. Over time, this union of cultures produced both the clans of the modern age and the jhorgun'taal: "children of two bloods," or half-orcs.

When the Mark of Finding appeared among the clans five centuries later, it was carried by humans and half-orc alike. Some considered this to be a divine gift to the humans and half-bloods to make up for their physical frailty - a magic mark in lieu of the great strength and dark-piercing eyes that Eberron had granted the orcs. The mark appeared among three clans - Aashta, Velderan, and Torrn - over the next five centuries, the hunters of these clans would become legends within the Marches.

In 498 YK, expeditions from central Khorvaire reached the Shadow Marches. One such expedition was led by Zil gnomes, who had calculated that the distant land might hold rich deposits of dragonshards. In this, they were correct, but the discovery of the Mark of Finding was an even greater treasure.

The clan leaders were cunning capable, but the Sivis emissaries were intent on working with the Marchers, not exploiting them. With the assistance of the gnomes, the three great clans and their lesser kin joined together to form House Tharashk, an Orc word meaning "united." For the symbol of the house, the first Triumvirate chose the dragonne, touched with the power of dragons and fierce hunter in the legends of both Marcher orcs and Sarlonan humans.

Tharashk was founded on the dragonshard trade, its dragonmarked heirs employing the Mark of Finding to locate shard fields while their unmarked kin extracted those shards. The clan leaders were ambitions, however, and not content to remain in the shadows. Over the last three centuries, the house has spread across the world. Tharashk prospectors explore the darkest corners of Eberron, drawing dragonshards and other valuables from Q'barra, the Demon Wastes, and Xen'drik. City-dwellers sell their services as inquisitives and bounty hunters.

Since the rise of the Daughters of Sora Kell in Droaam, members of House Tharashk have served as intermediaries between the realm of monsters and the east, bartering the service of monstrous mercenaries across Khorvaire. The house takes great pride in having forced mainstream Khorvaire to recognize that orcs and half-orcs are wothy of the same courtesies and opportunities as the races already established in society. Now, house members have used their status to do the same for Droaam's monstrous races, who can be found living and working across Khorvaire. Not all are pleased with this turn of events - particularly House Deneith.

Today, Tharashk is said to be working with the Inspired to locate crystal wastes in Xen'drik that are key to the creation of Riedran crysteel, and even sending expeditions to the Frostfell. Tharashk might be the youngest of the houses, but it is filled with fire. Its leaders intend to make their mark on Eberron, and the house is always searching for new opportunities to do so.

For all its short history, House Tharashk has been synonymous with the Finders Guild, and the operations of house and guild are common throughout rural and urban Khorvaire.

Within the guild, a group known as the Dragonne's Roar coordinates the sales of monstrous mercenaries and laborers. Members of the Roar work with clients or serve as recruiters in the wild. Agents of the group must excel at diplomacy and have a good grasp of monstrous customs and language. Accidentally insulting a flight of harpies is generally a bad idea.

The Triumvirate of House Tharashk is based in Zarash'ak, the largest city in the Shadow Marches. House Tharashk wields considerable power and authority in Zarash'ak. In addition to heirs of the house, the enclave includes a number of monstrous guardians, laborers, and ambassadors from Droaam.