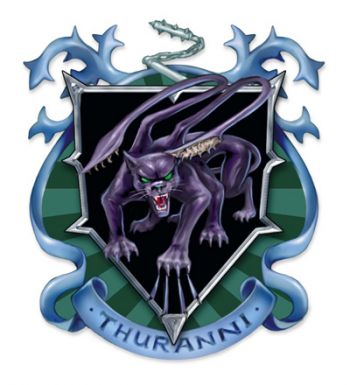 Though the Mark of Shadow was the first of the dragonmarks to appear, the elves of Thuranni are the second youngest of the dragonmarked houses. Like their cousins in House Phiarlan, the Thuranni lead double lives. Known among the general populace as fine artists and courtiers, they are equally known among the knowledgeable elite as purveryors of secrets and dark deeds. In a short time (especially by elven reckoning), the Thuranni Shadow Network has grown to rival and even eclipse its parent sect, the Serpentine Table of House Phiarlan. In espionage and undercover work, agents of the new house have as good a reputation as their Phiarlan brethren. In assassination, House Thuranni has a distinct and dangerous edge - one that makes many within the dragonmarked houses uneasy.

The edicts of Korth demand that the dragonmarked houses maintain a strict neutrality with regard to the political concerns of the land. However, the work of espionage is, by its nature, inextricably linked with the affairs of nations and their partisan concerns. For that reason above all others, existing conflicts within House Phiarlan grew out of control, ultimately leading to House Thuranni's break from teh rest of the house in 972 YK - an event now known as the Shadow Schism.

Eyes of All Nations

Before the start of the Last War, House Phiarlan had a comfortable working relationship with the heirs of Galifar who sta on the thrones of the Five Nations. The house helped them to maintain order in the kingdom, uncovered treasonous conspiracies, and guard against any threat from outside Khorvaire. Phiarlan assassins removed insurgent leaders and other internal threats. On more than one occassion, House Phiarlan helped to enforce the strange laws of inheritance, such as the ones which prevented the eldest child of Breland's king from ever succeeding to Breland's throne.

There were occasions, even in a unified Galifar, when the rulers of the Five Nations plotted against each other and even against their sovereign, and House Phiarlan was often involved in those schemes. Nascent organizations that would eventually grow into Breland's King's Citadel, Aundair's Royal Eyes, and the like relied heavily on intelligence purchased from House Phiarlan.

With the death of King Jarot, the best efforts of House Phiarlan were no longer able to ensure a peaceful transfer of power and Khorvaire was plunged into a century of warfare. Each of the Five Nations built up its own corps of covert agents and set them to work against the spies of enemy nations, while continuing to rely heavily on Phiarlan intelligence.

A house that was more strongly unified to begin with might have been able to remain united even under such circumstances, but House Phiarlan had always been fractious. The Mark of Shadow appeared not in one family line but in several, and relations among the Phiarlan lines had been strained in the past.

Five lines - the Tialaen, Shol, Elorrenthi, Thuranni, and Paelion - were the most prominent and influential families in House Phiarlan before the schism. Each line had its particular strengths within the broad field of the house's activities, and preferred clients among the factions and organizations of the Five Nations. Rivalry among those six lines, not to mention the numerous smaller lines within the house hierarchy, oftne grew fierce. Ultimately, the strains of the Last War proved to be greater than the ties that bound the Phiarlan families together.

The final blow came in 972 YK. The Order of the Emerald Claw - at the time, an extension of Karrnath's government - was a favored client of the Thuranni family, as well as the most important espionage-related organization in Karrnath's government. Knight Superior Kadrath ir'Vardikk, high-ranking Emerald Claw officer, came to Lord Elar Thuranni d'Phiarland with information that point to a Brelish plot to assassinate both Karrnath's regent and its young king. The plot relied heavily on the talents of the Paelion line, the most fearsome assassins in House Phiarlan. Sir Kadrath demanded that the Thuranni line eliminate the Paelions before the assassins could carry out their mission.

At first, Lord Elar was hesitant to strike against his own house. He first tried to verify the information Sir Kadrath had brought him. What the Thuranni agents uncovered, however, was a far greater threat than a simple assassination plot against Karrnath. Lord Tolar Paelion d'Phiarlan, it seemed, had concocted an elaborate scheme to bring the Last War to an end and gather the reigns of power in Khorvarie, not in Breland's hands, but in his own. Part of this plan, Lord Elar learned, involved exterminating the other Phiarlan families as well as the leadership of the other dragonmarked houses.

Some might have dismissed these plans as megalomanical ravings presenting little serious threat. Since they originated in the most fearsome line of assassins in all Khorvaire, however, Lord Elar took them utterly seriously, and he ordered an immediate strike to exterminate the Paelions before Lord Tolar could carry out his plan.

Lord Elar himself killed Tolar and his immedate family, while the Thuranni agents at his command slaughtered every Paelion within the family holdings in Lhazaar, and everyone they coudl find in Phiarland holdings across Khorvaire.

Outraged at his apparent betrayal, Boaron Elvinor Ellorenthi d'Phiarlan declared the Thuranni line excoriate. Defiant, Lord Elar refused this punishment, instead declaring the formation of a new dragonmarked house. The clients of the Thuranni family continued doing business with the excoriate house, and Elar - now taking the title of Baron - managed to acquire some clients formerly loyal ot the Paelion line.

To this day, Baron Elar d'Thuranni maintains that he acted out of loyalty to his own house nad all the dragonmarked houses, quashing a plot that would have thrown all of Khorvaire into even greater upheaval. There are many sides to the story, however, and - as in all tales of espionage - the truth is hard to discern.

Some would suggest that the Order of the Emerald Claw actually fabricated evidence against the Paelions, bringing some of it to Lord Elar while planting the rest in the Paelion holdings for Elar's spies to uncover. Some further suggest a link between teh Emerald Claw's role in the Shadow Schism and Regent Moranna's decision to outlaw the order just four years later.

Other theories suggest wilder conspiracies. Some claim that human agents of the draconic Chamber helped to bring the schism about in order to fulfill prophetic claims about thirteen houses or the split of a single house. (Many of these theorists further claim that the same Chamber agents are working to prevent House Cannith from splintering for the same reason.) Others whisper that at least one prisoner in Dreadhold is imprisoned there for his role in fomenting the schism. Still others claim that Lord Elar and Baron Elvinor amicably agreed to a split in the house and used a mutual enemy, the Paelion line, as a scapegoat to cloak their true intentions.

Though one of the youngest dragonmarked houses, Thuranni has House Phiarlan's centuries of experience to draw on in its business dealings - and its ability to screen its darker business behind artistic endeavors.

Unlike House Phiarlan, House Thuranni has no interest in opening up to those outside the house. As a result, though it offers artistic training through the True Shapers, such training has no connection to the artistic or espionage activities of the Shadow Network.

The power of House Thuranni is centered in and around the Lhazaar Principalities. The Shadow Network likes to discourage the idea that its operations are based in any one location, but the powerful families that make up the house claim territories that are more or less their own. The Thuranni family, led by the house patriarch, Elar d'Thuranni has holdings in the Lhazaar capital of Regalport and in Sharn, and most high-level house business is carried out in these two places. The patriarch has also been developing a massive, heavily fortified family enclave near the northern island of Stonespur for the last two decades.

The town of Tantamar, on the northern coast of the Lhazaar Principalities, is the center of house activity on the mainland. House Thuranni has additional enclaves in Droaam, Karrnath, and Q'barra, and has establihed outposts and safe houses across Khorvaire.