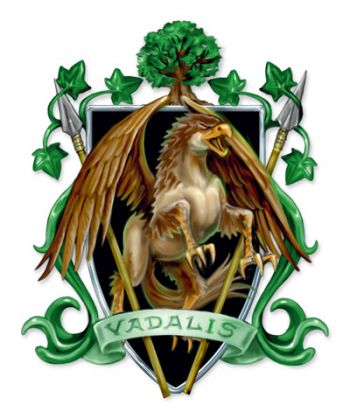 House Vadalis is arguably the most innocuous of the dragonmarked houses. Its gifts do not win battles or drive the commerce of nations; the house was not instumental in the Last War or in establishing the traditions of the houses. Its mark allows it to better care for and control animals; while useful, this ability is hardly the stuff of legend.

Yet somehow, this inconspicuous house carries more than its hare of controversy. During the War of the Mark, it was rumored that House Vadalis bred arcane beasts so horrifying that they were later banned and destroyed. Valenar refuses to allow Vadalis heirs to even enter the country, and the house's bonding of magic with nature alternately inspires wonder or hostility among the people of Khorvaire.

The dragonmarked houses consist of extended families - separate bloodlines that all trace back to a common ancestry. However, the sheer size of most houses means that few house members can claim any sort of relationship outside their immediate family unit within the house. House Vadalis is the exception to this rule.

While the other houses have done their best to increase their size and influence on Khorvaire, House Vadalis has taken almost the opposite stance. Every Vadalis heir over the age of 10 can recite his family lineage on both sides for several generations. This is not a matter of rote memorization for the purpose of pride, but information that sees daily use. Through this knowledge, any heirs of House Vadalis can determine their exact relationship to one another within an hour's time. This in turn creates a strong bond between them. It is one thing to work alongside someone who shares your name, but another to aid your grandmother's sister's great-grandson - at least to a Vadalis heir.

House Vadalis is a family first and a business second. Commercial deals that might threaten the larger family unit are ignored, while plans with less profit that accommodate the house's structure are taken up instead. The other houses are routinely astounded by the Vadalis way, often ridiculing the house's limited wealth and influence, but Vadalis simply takes a different view of the world. In their minds, no one of their blood is a stranger, and no amount of money can take the place of kin.

House Vadalis runs the Handlers Guild, devoted to the business of breeding, caring for, and selling prize animal stock. Membership in the Handlers Guild is not mandatory for all house members, but for heirs who intend to work outside the main enclaves, the guild establishes a good working relationship with ranchers and other breeders.

In the same way, membership in the Handlers Guild is not automatically a stepping-stone to status in the house. Both guild and house are vital in their own right, and joining one solely to make progress in the other is actively discouraged.

The house handles research into new types of animals and new breeding programs, as well as the sale, care, and training of those animals. The Handlers Guild functions much as an outreach program, operating primarily in areas where Vadalis does not have official house enclaves. The guild serves to gather independent ranchers and breeders, share information and bloodlines, and sell Vadalis methods and training to those who want to improve their own herds through nonmagical means. In addition, the guild licenses the teamsters, drovers, stablehands, and handlers that comprise the most common face of the house in Khorvaire.

The Handlers Guild provides certification for its members, allowing them to find work with wealthy patrons who need their lands and livestock managed. It also deals with business the house does outside the Eldeen Reaches. It has almsot no enclaves or outposts, its members instead meeting up wherever their travels happen to take them. Some have noted that such a fluid presence would make an excellent front for any number of sinsister causes, but no evidence of such activity in Vadalis has ever been found.

House Vadalis had its home in the western wilds of Aundair long before Galifar came to pass. When the Eldeen Reaches withdrew from Aundair, the house saw little reason to leave.

The small city of Varna acts as the seat of Vadalis power. Most of its people work in some way for the income generated by Vadalis trade, but the house uses its enclave within the city primarily as a place to conduct business with the outside world. The majority of its research and bloodline development takes place at Foalswood, the sprawling ranch that the Vadalis family calls home.

A far cry from the defensible keeps maintained by other houses, Foalswood is a complex of barns, warehouses, and homes nestled among the rolling hills around Varna. Though one of the smallest house headquarters by population Foalswood features uncountable acres of pasture and meadow where Vadalis animals roam. Though he spends his days in Varna, the patriach lives at Foalswood, as do most of the heirs to the house. The largest building designed for human use is the ranch's great meeting house.

Outside Varna, House Vadalis maintains enclaves in small towns across the Reaches, including Merylsward, Delethorn, and Erlaskar. It has a large ranch outside the villages of Shavalant and another on the outskirts of Wroat. The house also has holdings in the cities of Fairhaven, Flamekeep, Newthrone, Pylas Talaear, Sharn, Stormreach, and Trolanport.