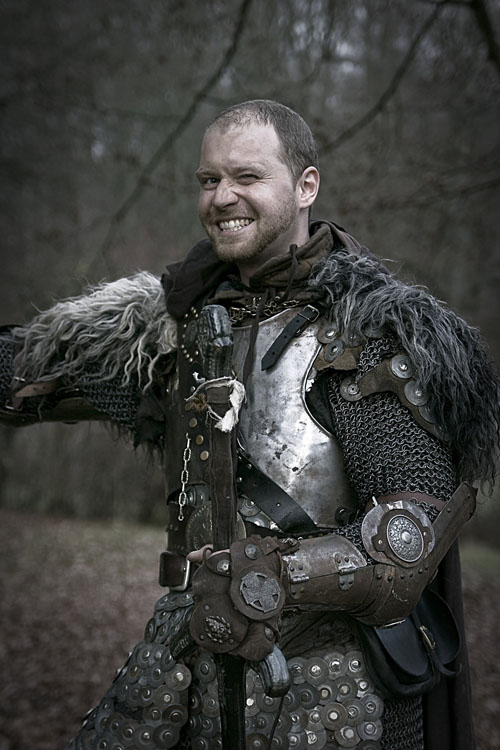 Pendleton is tall, stocky, scruffy and always seems to be grinning in reaction to some jest that only he had heard. He counts most people amongst his friends, even if they do not return the sentiment initially, but in the end, his good humored demeanor is difficult to put off forever. Pendleton is a little on the simple side, with his emotions and intentions on display for anyone to read and a tendency to forget things mere seconds after he was told to remember them. Men are drawn to him like he was a little brother they never had and women are drawn to him as if he were a small child or puppy, and he's quite fond of the attention from both, until things get serious at which point he will make every attempt to withdraw himself as any sort of focus in the situation. Pendleton loves to compete, from feats of strength to brawling to armed combat, even if it's outside his own expertise, like riding and archery or feats of cunning, such as the contest of riddles between Maesters he had once stumbled into and gleefully joined, much to the amusement of those present. Given his penchant for jumping into arenas where he is clearly outmatched, he is as much a good loser as he is a good winner, for him it's all about the camaraderie and the thrill of the challenge, not who actually wins or loses.

Pendleton is the youngest of nine brothers. His father, Brenen, is the youngest of three brothers and cousin to the heir of the house on top of that - it would require a widespread plague in order for him to ever inherit a notable position in the Grell household. His lovely mother, Ehlona, had been a Hill from Lannisport until she had been married to his father. His youth was somewhat poor and a bit crowded and rowdy with there being nine young boys in the house, though they were overall a happy and healthy lot. As each of his brothers came of age, his parents worked hard to find others willing to squire or apprentice each of them and they would be shipped off to their new lives. A few years after Pendleton had come of age, he was squired to Ser Kellis Drinkwater, a Dornish knight that had been staying with House Blackwood. For three years he remained in the Riverlands, save for a couple trips to Kings Landing and back. After that time, Ser Kellis relocated to Kings Landing and took Pendleton with him. Ser Kellis was a rather peculiar and...fastidious man who valued wine, poetry and his privacy. He was a swordsman and waterdancer, highly skilled with light blades, but quickly ascertained that his style of fighting would not serve well for his thick and clumsy squire who generally preferred brute force over any sort of delicacy. So Pendleton soon found himself being volunteered part time with no pay for guard duty amongst the City Watch in exchange for being allowed to train amongst them, learning to wear armor and wield pole-arms in a fight. In time, he was knighted and shortly after, Ser Kellis left Kings Landing and returned to Dorne. Pendleton remained behind where he continued to serve amongst the Gold Cloaks.