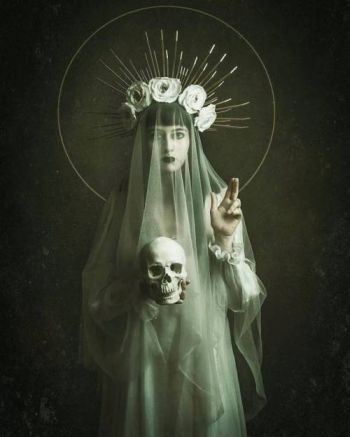 The Veiled Skull, Lady of the Far Shore, Keeper of the River
The goddess Styx is not merely goddess of the River Styx – she is that ancient and hallowed riverway. Most often seen as a figure shrouded in veils upon the far shore of the river (upon the side of the dead for the living who see her, and upon the side of the living when the dead catch their glimpses), Styx's powers are invoked for power over death and life. The undead are anathema to her, and her magics are frequently used in destroying them, but she also offers Achilles-like powers of invulnerability for the living who invoke her spells.

The Arcana of Styx are not commonly known. They are usually known only to those with mentors among the dead, or with access to the River itself.

The following spells are available to characters with access to this arcana. They are not the only secrets the River has to offer a sorcerer, however.

Baptism of the Styx

This spell creates a limited invulnerability for the target of the spell, which need not be the magician themselves. Unlike Achilles, it is not permanent or perfect, but neither does it create a vulnerability.

The Call of the Black Waters

This spell calls to the living as the waters of the Styx do.

To Lie Upon the Shore

This spell mimics the waves of wearying exhaustion that the living feel as they walk the shores of the Styx.

The Veil of Death

This spell pushes an undead creature further across the river, returning them to a state of proper death.

The Veil of Life

This spell pulls a living creature away from the river, returning them to life if they have not been dead for very long.