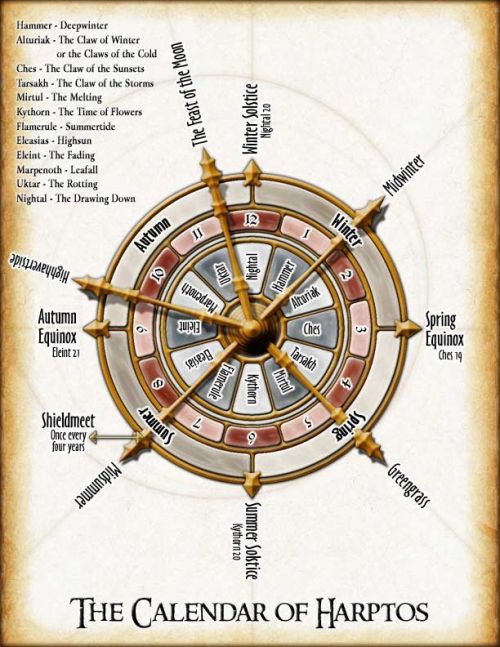 Midwinter is known officially as the High Festival of Winter. It is a feast where, traditionally, the lords of the land plan the year ahead, make and renew alliances, and send gifts of goodwill. To the commonfolk, this is Deadwinter Day, the midpoint of the worst of the cold.

Greengrass is the official beginning of spring, a day of relaxation. Flowers that have been carefully grown in inner rooms of the keeps and temples during the winter are blessed and cast out upon the snow, to bring rich growth in the season ahead.

Midsummer, called Midsummer Night or the Long Night, is a time of feasting and music and love. In a ceremony performed in some lands, unwed maidens are set free in the woods and "hunted" by their would-be suitors throughout the night. Betrothals are traditionally made upon this night. It is very rare indeed for the weather to be bad during the nightsuch is considered a very bad omen, usually thought to foretell famine or plague.

This day is part of no month, and follows Midsummer Night. It is known as the Shieldmeet. It is a day of open council between nobles and people; a day for the making and renewing of pacts, oaths, and agreements; tournaments, tests and trials for those wishing to advance in battle fame or clerical standing; for entertainment of all types, particularly theatrical; and for dueling.

Higharvestide heralds the coming of fall and the harvest. It is a feast that often continues for the length of the harvest, so that there is always food for those coming in from the fields. There is much traveling about on the heels of the feast, as merchants, court emissaries, and pilgrims make speed ere the worst of the mud arrives and the rain freezes in the snow.

Feast of the Moon (Festival)

The Feast of the Moon is the last great festival of the year. It marks the arrival of winter, and is also the day when the dead are honored. Graves are blessed, the Ritual of Remembrance performed, and tales of the doing of those now gone are told far into the night. Much is said of heroes and treasure and lost cities underground.