The gas giant floats in the Gandria Nebula, a world only a few short millenia from turning into a full-blown star. The eldest of the stellar bodies in the nebula, Arvoth already functions as a near-star, radiating light and heat sufficient to illuminate the moons it has gathered to itself.

Arvoth is host to a variety of gas-mining installations in its upper atmosphere, where gravity is manageable; descending deeper into the proto-star becomes a race between radiation and crushing gravity to see which ends the trip first. Occasional shadows can sometimes be seen flitting through the brightness below, leading to the folklore of the "dragons of Arvoth." No actual creatures have ever been reliably recorded on any recording equipment, however, leaving these "dragons" in the realm of miner's tall tales. 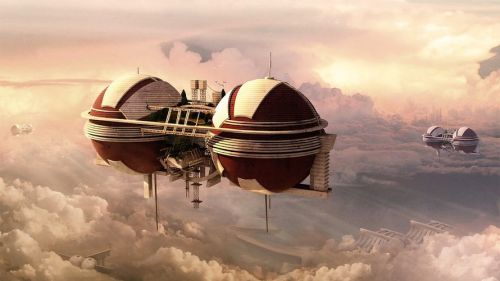 There are a several dozen mining installations in the upper atmosphere of Arvoth, riding its near-solar winds in wide orbits around the world's wind bands. The majority of these are owned by one of two factions: the Tiliq Mining Consortium or the Lekanton Sovereignty. These installations are always sealed, allowing workers to work without the need for masks, although many of them do have outdoor working areas or even lookout points whose exposure to Arvoth's native atmosphere necessitates breathing aids.

The massive double-domed Tiliq facilities are all identical and fabricated to be quickly constructed. Designed to ride Arvoth's winds on low-power industrial repulsors, the Tiliq facilities can all house up to 5000 workers, with living spaces for them in one dome and work space (which includes vehicles and gas storage tanks) in the other.

These mining facilities use industrial collection pods piloted by workers to dip down into the rich bands of gasses that accumulate below the layer of the facilities to harvest the targeted gasses. While aboard, a pilot monitors the density of the gas, the integrity of their pod, and rate of collection; otherwise, it means long hours sitting in a tight cockpit while the pod does the collecting, occasionally adjusting location within the band to hit the richest deposits. Pilots return to the station when their tanks are filled or their shift is over (whichever comes first), and other technicians empty the vessels and perform maintenance on them necessitated by the constant exposure to radiation and gravity.

Tiliq does not permit dependents or families to dwell aboard-station for their employees here, so most workers are on three-month rotations of work, requiring them to remain for the full time. Most workers take a month off after that to rest and recover, although the desperate or lonely simply sign right back up for another rotation. Working the gas mines of Arvoth is better money than other Tiliq contracts, so it's not unusual to find young folk from poorer backgrounds signing up for a few cycles in order to raise money for some other goal (such as higher eduction, a ship, or a move to some place other than where they grew up).

In contrast to the Tiliq installations, the Lekanton Sovereignty uses piped-gas mining methods, with repulsorlift facilities that hover about a mile above the gas band being tapped. These places are dark and cramped, and manned entirely by slaves of the Sovereignty. They are also entirely off-limits to those who do not work there, defended by flights of the Sovereignty's signature "Aggressor"-class assault starfighters.

A handful of other entities also maintain installations in the upper atmosphere of Arvoth, although none at quite the levels of either the Tiliq or Lekanton installations. A small number of research installations associated with various corporations or local universities exist here, and there are persistent rumors that the Empire maintains its own super-secret such installations as well. Others are simply smaller mining outposts, owned by tiny corporations, cooperatives, or other bodies.

Additionally, there are a number of these facilities that have been abandoned for one reason or another over the years. Depending on their condition, they exist as either grimly floating ghost towns or as retreats for criminal organzations. It is not uncommon to find pirates and spice-runners using these facilities for a variety of purposes, from hideouts to stashes to illegal research facilities. There are even rumors of one facility called Brightfire Outpost, which serves as something of a shadowport.

Although classed at current as a planet of its own accord, Arvoth is in the final stages of transforming into a star. The bodies that currently surround it will undoubtedly form the basis of planets when it ignites, but for the moment they are classified as moons.