One of the corporations native to the Halo Frontier, Tiliq Mining Consortium is quite easily the biggest of them. Built by a conglomeration of investors from Gandria, Kobagari, and the Lekanton Sovereignty, Tiliq has long since outgrown its origins, becoming an economic power in the Halo Frontier. Though they have spread to other parts of the Kanz Sector, they largely remain a local entity.

The following pieces of equipment are fairly ubiquitous to Tiliq Mining Consortium operations. 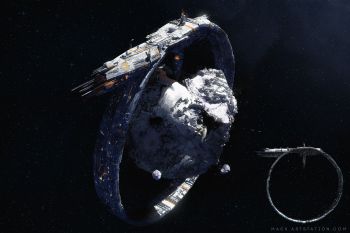 One of the distinct innovations of the Mining Consortium are its mining rings, a proprietary technology that combines starship engineering with state of the art harvesting technology. Mining rings can be maneuvered to capture asteroids and other smaller chunks of free-floating space ore, capturing them and even able to transport them around a given system at sublight speeds.

The installation then drives a spar down into the captured material. This spar is hollow and is the means by which miners gain access to the surface of the material. The spar also contains the means to gather and sort ore and deposit it within the ring's upper chassis, in the ore-storage compartments there.

The can generate an energy field that keeps the asteroid or any of its particles from spinning off into space as it is broken up. Instead, the spar is equipped with a "catapult" system that ejects worthless rock at high speeds away from the ring.

Defenses: Each shift of work, Tiliq ensures that its rings are protected by a patrol of four to eight IE-440 "Nighthawk" starfighters, who act to defend ring installations. They usually spend their shifts patrolling the area, warning off any approaching ships. Attacks by pirates or other assailants that can't be easily handled by the patrol are reported to the Consortium, who respond by sending in a Tiliq security force consisting of a single Marauder-class corvette and its complement of twelve Nighthawks.

In emergency situations, a mining ring's catapult system (which is really more of a projectile gun emplacement) has even been used to defend a mining ring against attacks. By and large, though, this is the extent of the defenses a mining ring has available to it.