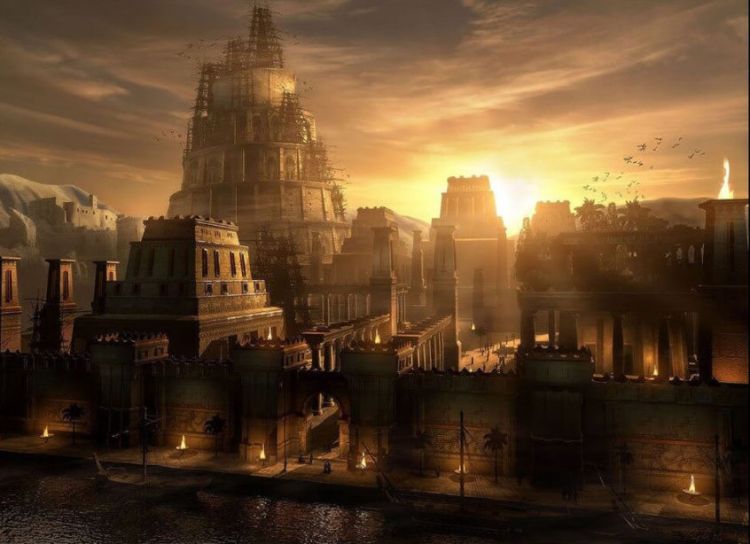 The world is waking from its Dream. Urd-Ashak, the city built on the first light of waking, has risen in unfettered glory from the dawn of that first day. But now, words from afar bring confusion and fear to this bastion. The eudor, the folk from an arid south, bring a promise of new wakings, but dangerous monsters prowl the wilds along with them. Worse, whispers spread through the city of folk of unknown provenance who emerge from below and beyond the world bearing malice.

In Urd-Ashak, the folk light beacons in the darkness to dispel such notions and pray to the spirits for succor. After all, the waking brings only the fulfillment of a promise for good. Doesn't it?

One of the defining features of the city is its elaborate system of paved streets that mapped the growth of the settlement from town to city. Quite literally, in fact, as members of what in modern times is the Order of Haman'suri worked in communion with the spirit to determine the optimal street layout for such growth.

The streets of the city connect to the great roadways that radiate out from the city across the plains. The construction of roadways, too, falls under the purview of the Order of Haman'suri, as it extends the city's connection to distant communities.

Two sets of walls have been built over the generations. The original set were simply the city walls until construction began on the newer, larger set. The original walls, which enclose the oldest parts of the city, were named the Sky-Blessed Ramparts, while the new set was named the Walls of Four Directions. City folk mostly refer to them as the ramparts and the walls, as most dwellers think of travel within the city as either in toward the ramparts or out toward the walls.

The gates allowing passage through either set of walls have always been held in great significance. Every gate has its own name and set of decorations and usually a combination of spirits and lore associated with it. Much of the city's history is enshrined in the mosaics, paintings, and sculpture that adorn the gates.

The central plains, though blessed with water, are not home to the great rivers of the world. These came later, with the waking of the mero. Urd-Ashak's lifeblood is the system of canals that draws water from the many rich springs beneath the city and channels it for use. They are supplemented by rainwater reservoirs that sit as great pools throughout the canals. The canals vary in temperament, ranging from almost wild to disciplined and precise, all to serve not just the folk but also the plants and animals that call Urd-Ashak home. The Order of Shelot has overseen the development of the canals from the early days of the city to ensure that the waters that sustain it remain healthy and in ample abundance.

The ziggurats of Urd-Ashak house and nurture the spiritual life of the city. Each is a grand temple dedicated to a particular spiritual pursuit or philosophy, sometimes housing one order and sometimes multiple orders united as particular foci under one overarching idea. As such, ziggurats are also places of communion with the spirits aligned with that ziggurat's philosohy.

Although ziggurats house the great philosophies of the city, spiritual study also includes more specific or particular thought as well. These are represented by the obelisks of the city, which can be found in any setting throughout it. Obelisks can represent a broad range of ideas, pursuits, and beliefs, not always exclusively spiritual in nature. Here, the folk may come to contemplate a particular question, activity, or path.

Many obelisks are attended by spirits and often a small order, individual priest, or teacher of another kind who dedicate themselves to understanding the obelisk. Additionally, most ziggurats include a number of obelisks on their grounds to provide a focus to particular components that make up the philosophy of that temple.

The rihads of Urd-Ashak are, much like those in other communities, large open air courtyards enclosed by walls or other structures that serve as community space. However, in the city, the rihads are numerous and often dedicated to more specific functions than their rural counterparts. Many play host to specific gatherings and festivals through the seasons and are used as performance and general community spaces otherwise. The rihads are influenced by the neighborhoods in which they are found, so their particular foci range broadly, including serving as marketplaces, amphitheaters, places of study, art spaces, civic platforms, and more.

Visitors to Urd-Ashak have a variety of options available to them. Most will be familiar with travel houses, a type of communal house that is maintained in larger towns throughout the world. Elsewhere, travel houses are open to any visitors and are stocked and maintained by the community. Visitors are simply expected to help out as they are able while staying in a travel house.

Travel houses in Urd-Ashak are more particular in use. All are maintained by city-appointed workers and are available for short term stays within the city. Those new to the city are directed to a travel house to get their bearings and then encouraged to move on to whatever situation suits them best. The travel house workers often serve as advisors and guides in this regard. Travel houses are either free for a short period of time or charge a small fee from the coinage given to new visitors at the gates.