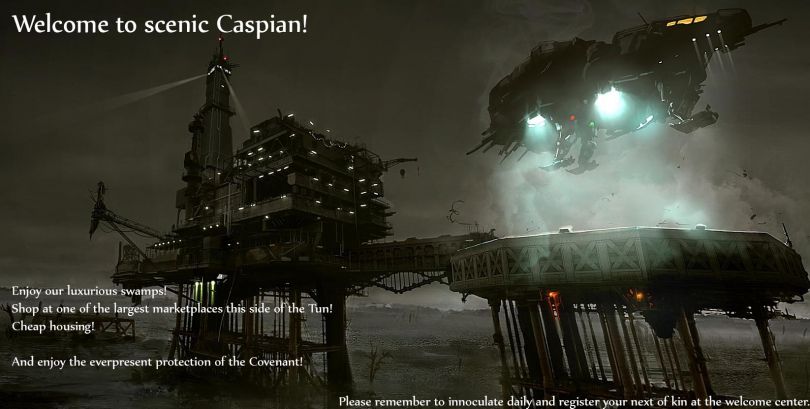 The World of Caspian

Caspian is the fourth planet from the sun of the Gilish solar system. The planet is small and covered primarily with water. Land masses are relatively small and mostly swamp, jungle or both. The only native sentient life is a species called the lor and the kami, which are local nature fragments that dwell on the only truly solid landmass on the planet. There is one settlement large enough to warrant the title "city", called Denbrawg, and a smattering of smaller villages that dot the globe. The Ring space station orbits the planet and is the coming and going point between Caspian and the Solar Conduit Gateway, "Winds that Cradle the Dawning Mind". There is one other colonized planet in the Gilish system, the cold rocky world of Holsh which is on an orbital ring very close to that of Caspian. Once every 17 years the two worlds come so close to each other that the gravitational pull can be felt upon one another, causing gravity to be considerably weakened for about a week as well as an entire collection of natural disasters.

Who's Who of Caspian

The City of Denbrawg The only city on Caspian, located on the swamp dominated continent of Forok. Although calling any landmass on Caspian a continent tends to be an exaggeration of sorts as none of them are particularly very large, nor is there much in the way of solid land to be found. Denbrawg is a collection of large structures and neighborhoods that have been built atop a series of "mostly stable" stilts and scaffolding with the towering Covenant genesis ship, bearing the name given to the planet, half sunken into the swamp at its center. The city does not have a space port, requiring ships to dock at the Ring station in orbit and take shuttles to and from the surface.

The Ring The Ring is the name given to the small space station that orbits Caspian. Too small to be used as a commerce center, the station is primarily used as a fueling station and space port for ships. Shuttles to the surface are provided free of charge (though they make up for this with the price to return to the Ring).

Mr. Fideius' Nickel Mines And this is the reason Caspian was originally colonized. These mines are expansive and terribly dangerous due to how soft the earth and stone is in the region. The workforce for the mines is comprised largely of lor slaves and debtors who could not pay off their loans to the Dukes in a timely fashion.

The Lor The native race of Caspian, these primitive amphibian creatures resemble legless, serpentine newts with large bulbous pale eyes. They seem indigenous only to the swamps of Forok and were largely eradicated by early settlers when they had resisted colonization. Those that were not slain were enslaved and most of their kind were sold and shipped off world, though it is rumored that one of the Covenant Dukes that lives on Caspian has acquired a taste for their flesh and breeds them for that purpose. The lor are still a somewhat common sight within Denbrawg, generally serving as slaves for menial labor.

Sotori Forest The largest continent on Caspian is covered entirely in dense forest. Sotori is extremely dangerous and generally avoided as it home to many nature fragments called kami that possess the power to dominate the wildlife and animate the land and forest to attack invaders.

Ainu Ruins The largest Nir ruin in the solar system, with a diameter of nearly 40 miles on the surface. The distance the ruin delves into the depths of the world has yet to be determined. Ainu is renown for it's stronger than normal psionic resonance (rank 4) and as a result, it's larger population of psychic ghosts and temporal shift phenomenon. These factors hint at a particularly powerful artifact deep within the ruins and has lured artifact and treasure hunters for decades. No explorer having gone beyond the third detected level of temporal shift (which was determined to be a temporal difference of 1 to 256) has ever returned. It is rumored that they are still down there, unaware that so many years have passed them by on the surface or caught up in a psychic ghost's never ending nightmare.

Koshai Village The village of Koshai squats in the middle of a region of Caspian that can't seem to decide if its a swamp or jungle, combining all of the negative traits of the two. Koshai rose up around Duke Noshti's yacht when he claimed this region where the ruins of an old binary slingshot space port the Coalition had built before the Covenant claimed Caspian. Koshai is a strategic key point for researchers and treasure hunters seeking to explore the Ainu ruins and thus gets a decent amount of traffic to and from Denbrawg. Koshai is home to numerous shops and tradesmen, brothels, bars, taverns, casinos, artifact trade, slavers, non-certified cybertech and medical surgeons as well as Duke Noshti's yacht, which offers all of the above at a higher quality than you can find elsewhere in the village.

Cataloged Hazards of Caspian There is an assortment of dangerous creatures that make Caspian their home, including hundreds of poisonous and toxic reptiles, insects and an assortment of disease carrying critters, not to mention the temporal dangers and wraiths surrounding Nirish ruins. Following is a small sample of the planets more unique threats:

Denbrawg's relationship with the near invisible orumcek was a lesson that the founders of Koshai Village took to heart and chose not to repeat. The Duke of Koshai had proclaimed that no aggressive action is permitted against the local orumcek. While often unnerved by the evidence of their presence, the people of Koshai do not hinder their arachnid cohabitants and are both apprehensive and grateful for their odd acts of kindness (and for not stealing their dogs and children).