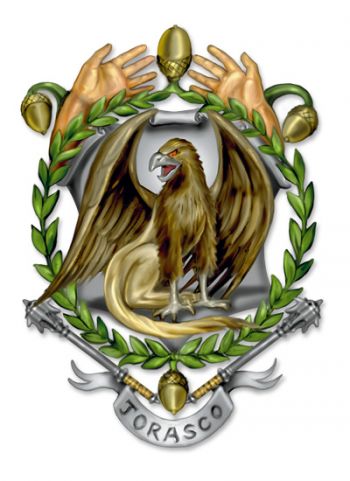 The halflings of House Jorasco hold the Mark of Healing, and their good works have saved countless lives. They heal the sick and the dying, and provide comfort and respite for those whom even magic cannot cure. They often work hand in hand with House Ghallanda, giving travelers access to healing and aid even in remote areas. By those who owe their health or life to the Mark of Healing, Jorasco's name is praised.

At the same time, Jorasco is not a charity institution. As a dragonmarked house, it is an economic stronghold of epic proportions, offering its services to all who need them - and are able to pay. This mercenary appraoach to succor rubs many people the wrong way, however, particularly the poor and indigent who cannot afford a healer's services regardless of need.

Like its sibling House Ghallanda, House Jorasco was born on the Talenta Plains. Unlike the Ghallanda halflings, House Jorasco long ago shifted its focus from the ways of tribal life to the cosmopolitan traditions of central Khorvaire. Today, Jorasco halflings have little or no connection to the ways of their nomadic ancestors, and are firmly entrenched in the lifestyle of the Five Nations.

House Jorasco has long been established as the pre-eminent source of healing in Khorvaire, having skillfully pushed the temples of the Sovereign Host and the Silver Flame out of the healing business centuries ago. The advent of the Last War saw Jorasco healers spread across the length and breadth of the continent. Remaining steadfastly neutral allowed the house to serve all sides in that conflict, providing mundane care for soldiers and magical healing for officers who directed the war. Jorasco healders assisted in important military operations and engaged in joint missions with House Ghallanda, offering respite and healing for the wounded - away from the front lines.

Even after the Last War's end, Jorasco still reaps the benefits of that dark conflict. Those who were broken in battle require a lifetime's care now that the war is over - and such care is House Jorasco's speciality. Since the end of the war, the house has expanded the number of enclaves and healing houses it runs by nearly a third, including opening state-financed centers for veterans of the Last War in each nation.

The Price of Healing

Initially, House Jorasco was the Jorasco tribe, a collection of related family lines. Eschewing the battle-hardened traditions of the Talenta tribes, Jorasco halflings earned their keep through their skills at healing: from mid-wifery, to patching up wounded warriors, to helping ease the dying along their way. Their skill would be paid for by the recovering individual's family or tribe, an exhance of gifts and services that was the expected convention of Talenta culture.

When the tribe became a house, the dynamic changed. In founding the house and establishing its headquarters in Karrnath, Jorasco soon found itself in debt to House Cannith and House Sivis - debt that called for Jorasco's services to be repaid in coin, not kind. In time, the healers of Jorasco were operating on a set schedule of fees and asking for payment in advance.

This initial fee schedule was designed to support the healers of Jorasco in return for the time they spent caring for others. As the house became more successful, however, payment became less about survival and more about profit. The Korth Edicts codified this situation in a way, preventing the houses from owning land and forcing them to focus their fortunes in gold alone. Since that time, Jorasco's mission of healing has always been balanced by the house's passion for profit, a reality that angers those most in need of Jorasco's gifts.

While the Healers Guild and House Jorasco are techniclly separate entities, the house's single-minded focus on healing makes it difficult to tell where one ends and the other begins.

Though House Jorasco's healing touch can be found across Khorvaire, the house's main seat of power is in the city of Vedykar, in Karrnath. The enclave there is known within the house as Resthold, and is the home of the matriarch Ulara d'Jorasco.

Within Resthold, one can find the finest healing facilities in all Khorvaire, in addition to a training hospital, a spa for long-term convalescence, and an asylum for those who suffer madness even magic cannot cure. Desperate individuals have been known to cross Khorvaire to seek help there; it is said that if you cannot be cured in Resthold, then nothing can save you.

Aside from Vedykar, Jorasco maintains large healing enclaves in Fairhaven, Sharn, and Gatherhold in the Talenta Plains. The house also has holdings and Healers Guild facilities in Flame Keep, Korth, Newthrone, Taer Valaestas, Trolanport, Pylas Talaear, and Stormreach, in addition to small offices and clinics across Khorvaire.