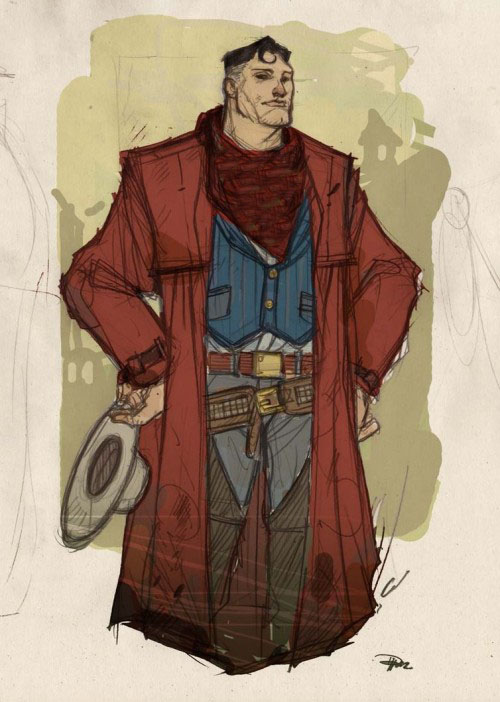 "The path of the righteous man is beset on all sides by the iniquities of the selfish and the tyranny of evil men. Blessed is he who, in the name of charity and good will, shepherds the weak through the valley of the darkness. For he is truly his brother's keeper and the finder of lost children. And I will strike down upon thee with great vengeance and furious anger those who attempt to poison and destroy my brothers. And you will know I am the Lord when I lay my vengeance upon you."
- Jules Winnfield, Pulp Fiction

A wandering hexslinger and gun-doc, Itinerant (or just "Ten" for short) is a wandering spellslinger- and armorer-for-hire.

Itinerant is a handsome human male, with dark black hair and blue-grey eyes. He is broad shouldered and several inches over six feet. Though he keeps himself immaculately groomed, his clothing is beat-up and dusty from his extensive travels.

The gunslinger is the law in a time when there is no law. He must aid the weak, help the injured, uplift the downtrodden and fill criminal and cruel motherfuckers with as much lead as their raggedy bodies will hold. He is a man of honor, but rarely sticks around to collect on the gratitude of those he helps.