Stomm rang glang du. (The tribe's honor above your honor.)

Gi tusen val nul. (Give one thousand for nothing.)

Trut zund stommpaart. (Truth is the honor of the tribe)." - Firbolg Code

Without self-expression, life lacks spontaneity and joy. Without service to others, it lacks meaning and purpose. - Helryth Hey, founder of the Radical Fey 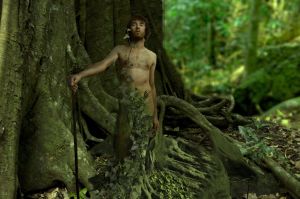 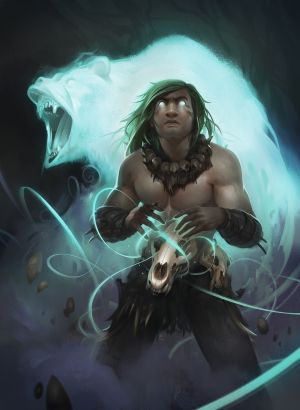 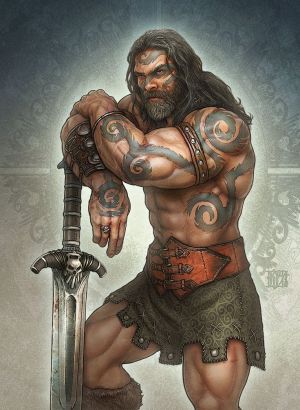 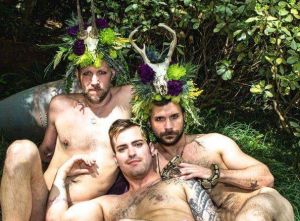 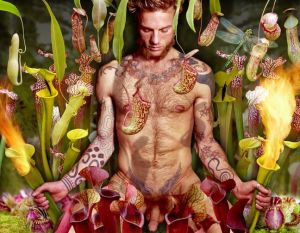 
Aeolus has a large, solid muscular frame with light blue skin that is covered in a light covering of auburn hair. He has reddish brown shoulder length hair and a full beard of the same color. He seldom wears many clothes, often preferring to go shirtless, with only a leather harness and a cloak, and a fur loin cloth or breeches. He will often go barefoot, choosing no footwear at all. When in public, or around round groups of people, Aeolus will often use the Firbolg's inborn Disguise Self magical ability to appear in "drag" as either a tall elf, half-elf, or human. He appears to wear similar attire to what he would normally wear, although with footwear, but will have fun expressing himself in different ways as different races with different features.

Sexuality: Romantically Aeolus is gay. He seeks relationships with and falls in love with other males. Sexually, He is hetero/homo-flexible. Seeking and experiencing pleasure is something that connects individuals to the Sacred and is an important. Sexuality is an important part of self-expression.

- Disguise Self: When he uses this version of disguise self, Aeolus can seem up to 3 feet shorter than normal, allowing him to more easily blend in with humans and elves.

Armor: Light armor, medium armor, shields (druids will not wear armor or use shields made of metal)

Aeolus can use his action to magically assume the shape of various beasts. - He can use this feature twice and regains expended uses when he finishes a short or long rest. - He can stay in a beast shape for 5 hours. He then reverts to his normal form unless he expends another use of this feature. He can revert to his normal form earlier by using a bonus action on his turn. He automatically reverts if he falls unconscious, drops to 0 hit points, or dies.

- Either of these options may be assisted by magic.

Druids who are members of the Circle of Dreams hail from regions that have strong ties to the Feywild. The druids’ guardianship of the natural world makes for a natural alliance between them and good-aligned fey. These druids seek to fill the world with merriment and light. Their magic mends wounds and brings joy to downcast hearts, and the realms they protect are gleaming, fruitful places.

Balm of the Summer Court: Aeolus is imbued with the blessings of the Summer Court. He is a font of energy that offers respite from injuries. He has a pool of fey energy represented by 10d6s. As a bonus action, Aeolus can choose one creature he can see within 120 feet of him and spend 5 of those dice. Roll the spent dice and add them together. The target regains a number of hit points equal to the total. The target also gains 1 temporary hit point per die spent. He regains all expended dice when he finishes a long rest.

Hearth of Moonlight and Shadow: Home is wherever Aeolus is. During a short or long rest, he can invoke the shadowy power of the Gloaming Court to help guard his respite. At the start of the rest, he touches a point in space, and an invisible, 30-foot-radius sphere of magic appears, centered on that point. Total cover blocks the sphere. While within the sphere, he and his allies gain a +5 bonus to Dexterity (Stealth) and Wisdom (Perception) checks, and any light from open flames in the sphere (a campfire, torches, or the like) isn’t visible outside it. The sphere vanishes at the end of the rest or when you leave the sphere.

As a Firbolg, Aeolus grew up in the wilds, far from civilization and the comforts of town and technology. The wilds are in his blood. Even in places where he doesn’t know the specific features of the terrain, he knows the ways of the wild. As a druid, he trained in seclusion with his mentor and others in his druid order.

Wanderer: Aeolus has an excellent memory for maps and geography, and can always recall the general layout of terrain, settlements, and other features around him. In addition, he can find food and fresh water for himself and up to five other people each day, provided that the land offers berries, small game, water, and so forth.

Aeolus possesses keen insight into how other people think and feel.

- Gain proficiency in the Insight skill. If already proficient in the skill, add double proficiency bonus to checks made with it.

- Aeolus can use his action to try to get uncanny insight about one humanoid he can see within 30 feet of him. Make a Wisdom (Insight) check contested by the target’s Charisma (Deception) check. If his check succeeds, he has advantage on attack rolls and ability checks against the target until the end of his next turn.

Coat of Protection: +1 bonus to AC and saving throws

Kal'Hirol Pendant: A pendant made of volcanic glass hangs from an elaborately carved bronze necklace. It is always cool to the touch, and can only be worn by those bearers it chooses. This necklace is one of five ancient artifacts that were created when the material plane was being formed. Each of these five house a powerful spirit, who teaches and guides those chosen. Detailed information of the origin of these artifacts and their powers has been lost to time. Once attuned, Kal'Hirol grants the wearer a set of base abilities. Over time, as the bond between the artifact and the wearer grows, and as they fulfill parts of their destiny, more potent tiers of power are unlocked. This process cannot be forced and will happen naturally on its own.

-Met Steve early in his journeys. Aeolus and Steve had a sexual hookup, but Steve was in drag and Aeolus had used his Firbolg magic to disguise himself as an elf. In the midst of sexual passion there was a moment of intimacy and connectedness (need to define this moment - an action? a word? something that can be said or done years later and recognized). Years later, they both remember this hookup with fondness, but neither are aware who other is, because through the magic, disguise, drag, and alcohol, their true identities were obscured.

-Met Omaer Arbannon in a pub. He and came to the aid of a young man from the town we were in that was being harassed by 3 particularly obnoxious knights with the Order of the Gauntlet. Aeolus and Omaer got into a bar brawl with the knights - Ser Ivar, Ser Dougal, and Ser Becky - humiliating them and making enemies of them. The two decided to travel together after the fight, both for mutual protection and because they had become friendly with each other, and ended up travelling to Raksha together.