It is a dark time for the... wait.
It's been a dark damn time, for a long damn time.
People seem to think that the end of the Republic
a decade and a half or so ago, was some tragic and
horrific and historic event.
But out on the edges of the galaxy, the Republic
never had much influence... and now-a-days the
only difference is the Imperials are more likely
to dust you if they catch you. 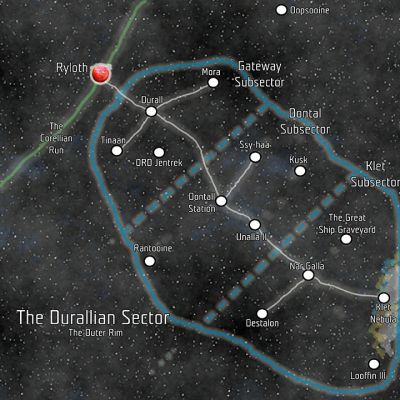 Tucked away in an obscure slice of the Outer Rim, a few short jumps from Ryloth, is the Durallian Sector. It is comprised of several thousand Star Systems, but only a tiny fraction are mapped and explored, fewer still are inhabited. But while the region is somewhat obscure; it is, in no way, an entirely lawless backwater. However, even its defacto capital world, boasting billions of residents, has little political power. Most people of never heard of the Sector, owing largely to the fact that it's neighbors include such legendary places like Tatooine, Christophsis, Rodia, Geonosis, and Arkanis. It's physical position is just off the Corellian Run, south of the Pelgrin Sector.

A Note on Locations: While the game rules as written doesn't specifically call it out, Planets have Qualities. These Qualities, some of which I will be creating, affect certain actions that are taken while within those areas. Rather than creating a singular list and then requiring players to flip back and forth between the various pages, I will include the details of the appropriate Qualities at the bottom of the Sub-Sector entries.

Notable for its proximity to Ryloth and the Corellian Run, the Gateway Subsector includes both the City-World of Durall, and the Imperial Stronghold of Tinann. The Empire maintains a strong presence here, with patrols along all major hyperspace lines and inspection at all major starports and space stations.

Located approximately halfway between Durall than the Klet Nebula, the Dontal Subsector takes its name from the massive deep space Dontal Station. This area also includes much of the industrial infrastructure of the region.

At the far end of the Sector, near its boarders of Wildspace, the Klet subsector is home to the expansive Stellar Nebula known as Klet. Here the most violent and dangerous individuals make their home, far away from the scrutiny of the more civilized Gateway and Dontal regions. While the Imperial Navy rarely makes a sizable presence here, the Hutt Cartel and the Crimson Corsairs both use their influence to keep the region from falling into complete chaos.