"The quick brown fox jumps over the lazy dog." - an English-language pangram

The Hollingberry couple call me Gwendolyn Marcella Hollingberry. We pretend that they are my parents. My real parents were foxes, creatures of the between places. One twilight a faerie woman stole away a little girl from the Hollingberry couple. She needed a replacement, a changeling to leave in place of the child. My curiosity had lured me there to spy on the faerie. She caught me and tugged off my tails and bundled me up in the stolen girls clothes. Then she was gone and I had lost my tails. The Hollingberry couple could not see the difference between myself and their stolen child, but they knew in their hearts that I was a stranger to them. They have been good to me, though cold and estranged, only ever going through the motions of what is necessary and expected. Mrs. Hollingerrry even attended one of my class plays last year. She gazed up at the stage with haunted eyes, looking through me at the memory of the girl she had given birth to, not even fully realizing it. I feel bad for them. I know their daughter is gone now. She had been returned to their world, ancient and frail. They did not know the old crazy woman who came knocking on their door one rainy night, ranting about things that made no sense. She died there. The Hollingberry couple wept for this poor old thing, though they didn't understand why they did so. It was so very sad. I cried for them all too. They accidentally locked me outside in the rain that night after the ambulance took the old woman away. It's okay, though. I was seven. I was a big girl. I'd be okay.

I met Wallace when I was nine. The Hollingberry's barely noticed him. I think a year later, Mr. Hollingberry noted him, pat him and said "Good dog.", then resumed reading his newspaper. The Hillingberry's love reading newspapers. He used to be a normal dog, but he found one of my lost tails and ate it. This changed him, made him a faerie dog and bound our lives. He's really smart, but he's super grumpy. If everything was up to him, all we would ever do is sit at home, read and watch television. But I crave adventure! I want to relish in the outdoors, run and leap high under the moon and beneath the sun. I want to talk with the animals of the city and the wild, and we will share stories and laugh and laugh.

I found one of my tails last Summer. Wallace says he found it in the attic and tried to hide it from me. He says he was trying to protect me from the mischief in it, but I think he really just wanted to eat it too! When I wear my tail, I can be a fox again! And foxes know secrets that they only share with other foxes. So I learned new tricks from my cousins that lurked in the shadows just beyond the borders of the fields of men. They taught me how to craft sleep into a powder and how to weave creation into clever traps using twine.

I use these secrets against the bad people; people who harm animals and children, people who harm innocent mothers, fathers, sisters and brothers. I am the Brown Fox and Wallace is the Lazy Dog; because he wants to stay home and be boring. We put them to sleep or trap them and Wallace calls the police to come and take them away, to throw them into jail forever.

The Hollingberry couple never notice when I'm gone. They never really notice me when I'm there. It's okay. I understand. I have Wallace. And the moon and sun and the secrets of foxes. I'll be okay. I'm twelve now. I'm a big girl. I'll be okay...

Brown Fox is a young girl of twelve with long auburn hair and blue-grey eyes. Brown Fox wears a headband with plush fox ears attached to it, face paint to give her more of a fox appearance, a mans smoking jacket over a floral shirt closed with a large bow tie she found in the attic. She wears a skirt made from the same material as her plush ears with a slit for her fox tail. The ensemble is completed with red tights with penny loafer shoes. 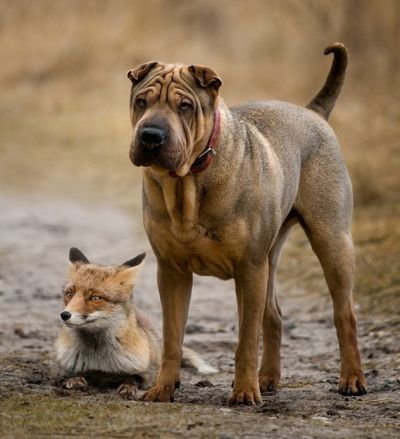