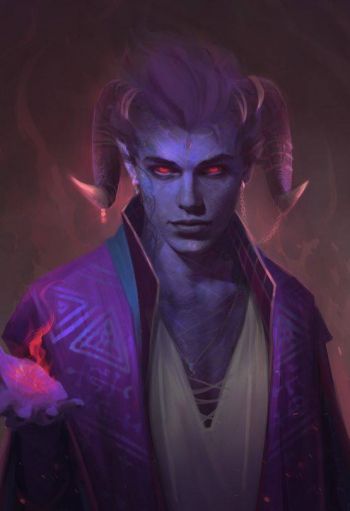 The vast majority of tieflings that walk the face of Eberron are the descendants of the nobility of Ohr Kaluun, a nation that once thrived in ancient Sarlona. The mage-lords of Ohr Kaluun forged dark pacts with infernal spirits beyond the material plane, empowering themselves and their progeny. Over generations, this taint accumulated until the first Kalunnite tieflings were born. When Ohr Kaluun was wiped out in the Sundering of Sarlona, a small number of tiefling nobles managed to flee with their retainers. They fled across the sea to western Khorvaire and established a hidden enclave that would become known as the Venomous Demesne.

Until recently the Venomous Demesne was thought mere myth by the rest of Khorvaire. That changed when the Court of Four, the heads of the four noble houses of tieflings that ruled the Venomous Demesne, entered into a formal pact with the Daughters of Sora Kell and joined the nation of Droaam under their rule.

Tieflings of the Venomous Demesne have a unified appearance, clearly displaying horns and other diabolic features, though they are possessed of a kind of dark beauty. They and their domain are referred to as "Venomous" not due to any predilection for or supernatural affinity with poisons, but rather due to their viper's nest-like society and culture.

The noble houses of the Venomous Demesne are tiefling families, shaped by ancient bargains. Kaluun tieflings possess unnatural charm and intellect, and wield powers of fire and darkness at will.

The Sarlonan nation of Ohr Kaluun was infamous for delving into dark magics. In the depths of their war labyrinths, the mage-lords of Ohr Kaluun forged pacts with infernal spirits and tapped into the powers of the planes. Over generations this twisted the blood of the nobles, producing the first tieflings. This corruption didn’t go unnoticed. Khaleshite crusaders fought bitterly against Ohr Kaluun, and fear of the demonic taint of Ohr Kaluun spreading across Sarlona was a cornerstone of the civil strife that resulted in the Sundering. The civilization of Ohr Kaluun was wiped out during the Sundering, but a small force of nobles and their retainers escaped across the sea. These refugees created a hidden enclave on the west coast of Khorvaire. Over the course of centuries, they regained a portion of their pride and power. They inspired fear in the savage creatures that lived around them, and their realm became known as the Venomous Demesne. The tiefling lords were largely content in their isolation until the Daughters of Sora Kell rose to power in the region and sought to unify the wilds into the nation of Droaam. Sora Teraza herself came to the Venomous Demesne, bypassing the mystical concealment as if it didn’t exist. She spoke to the Council of Four, and none know what she said. But in the days that followed, the noble lines sent representatives to the Great Crag and joined in the grand experiment of Droaam.

The Venomous Demesne is a tiefling community and culture. It is a small hidden city, whose population includes both humans and tieflings… though many of the humans have minor signs of infernal heritage, even if they don’t have the full racial mechanics. The Demense is ruled by an alliance of four tiefling families, and the members of these families are powerful casters delving into many paths of magic: there are warlocks, clerics, and wizards of all schools. Their powers are vast, but grounded in dark bargains made in the past. To most outsiders, their traditions seem arbitrary and cruel. The price of magic is often paid for in pain and blood. Duels are an important part of their culture – never to the death, as they are still too few in number to squander noble blood so casually, but always with a painful cost for the loser.

Cor'von is preoccupied with attempting to experience something good in the world as a reflection of the darkness and evil that comes to him in his visions (a gift and a torment from his Patron). While his outward demeanor is often affable and gregarious, it fluctuates in its authenticity depending on how impacted he is by the world. At his core, he is deeply untrusting of anything but the most subjective, which is why individual experiences of freedom, joy, and even despair are privileged over higher espoused ideals. Even though he has a complicated relationship with his body, he seeks to commune deeper with all domains of himself and is actually a very sensual being when he trusts his environment. Cor'von has a love/hate relationship with the occult in that he is a gifted practitioner with high awareness of the deeper mysteries and yet finds the practical application of it to be often mundane, transactional and uninspirited. He seeks to reconcile this contradiction by going on personal sojourns inward, simple personal rituals, playing his lute, and communing with nature all of which help him to hold his belief that there may be a greater organizing principle or source to the planes that if able to grasp would provide the context to give it all meaning. To the observer, his philosophy, behaviors and practices can seem mercurial and immutable, because they both are and because that's what he wants you to believe.

Cor'von is a Charisma caster and has high charisma. One of the traits of his particular lineage of Tieflings is a strange and sometimes exotified beauty of which he has particularly striking features. This is complicated by some of his more demonic features that are hidden underneath clothing and can be surprising for more intimate partners. Beyond this, he has a naturally affable and somewhat gregarious nature that makes him intriguing if not likable. He is refined and educated having come from noble heritage and his personality is often described in dialectical terms by others. For example, he is warm but skeptical, aware but naive, haunted but hopeful, indulgent but rational, etc. Cor'von will take on a face role in the right environments but that has somewhat been muted given his "stranger in a strange land" experience as a far-flung adventurer.

"Exploration and experience is the best way to divide the light from the dark. Whether that happens outside or inside is dependent on my mood!"

"You don't know me and I wouldn't dare to pretend that you know yourself so much that I can know you too."

My freedom is my most precious possession. I’ll never let anyone take it from me especially haven given so much away.

I’m fascinated by the beauty and wonder of this new land and seek to understand how others make meaning of life despite their darkness.

Cor'von has had the gift and the curse to see what lies behind the veil of reality and it's pure evil. On a bad day, it's a reason to dispair but they often find themselves in the expansive (if still needing to be tested) belief that their lies more benevolent if not organizing principles and entities that guide the formation and evoluion of the universe. Magic comes from somewhere and even the deities get it from a source beyond themselves.

Aundair is a land of wisdom and magic, but terrible things are hidden beneath its soil. A rakshasa rajah is buried deep beneath the floating towers of Arcanix, hidden under tons of rock and held in bondage by the Silver Flame. Her name is Sul Khatesh, but she is more commonly known as the Keeper of Secrets, for she knows more about dark and arcane matters than any mortal could comprehend. For now, she slumbers. She can prove a threat, however, even while sleeping. Occasionally, she touches mortal minds in her dreams, and some of the greatest mystical innovations of the Arcane Congress might have been inspired by the whispering words of Sul Khatesh. Few of those inspired by this ancient muse understand what they are dealing with, and her gifts might bring madness or unforeseen disaster. Mordain the Fleshweaver might have been driven to darkness by her words, and she could bring even greater horror to Aundair in the wake of the war.

Sul Khatesh is a careful schemer, and if she is freed, she will take some time to build up her power and her forces before revealing herself to the world. She despises the Silver Flame, but she sees the dragons of Argonnessen as the greatest threat to her return. She might try to turn the world against the dragons— encouraging the existing rivalry of the elves of Aerenal, or trying to find some way to set the church of the Silver Flame against Argonnessen.

Cor'von comes from significant resources but has no access to it, having left his community. He lives modestly but is always able to raise the resources he needs to keep adventuring onward.

Cor'von showed strange gifts as a child and was watched and interviewed by a secret society of the Lords of Dust who's mission is to release the Overlords from their tombs in order to initiate a new great war. They had suspected that he may actually be a Prakhutus or one of the "speakers", that can communicate with their masters who in turn would carry their rulers’ wishes to the rest of the Lords of Dust. At age 15 he ran away from home and on a fateful night was visited by his (then veiled) Patron, Sul Khatesh. In exchange for the power to control his own darkness he agreed to from time-to-time be used as a vehicle for the entity's hand on this plane, which he was assured was to bring about first power and then freedom for all. Young Cor'von did and could not know the true intentions of the great demon but given a sudden taste of the darkness he would be forced to hold back upon his awakening that night.

Cor'von suspects/fears that the ancestors of his House or some other group advancing a vision for darkness may have made the bargain to with an Overlord in order to gain power. His distrust of his origins and his future are existential and have driven him to leave his home. His noble House, while not the most powerful is the one with the deepest interest in occult and the excavation of hidden secrets and power. Did the Fiend choose him because of the machinations of his line or is he in himself an 'other' to all chosen directly. Worse, did he get chosen because his 'otherness' (being queer as a driver of that) make him amiable to the offerings of personal freedom?

Cor'von is currently being mentored by Oma, steward and Council elder of the Brightened Dark, an exoteric name for a secret society meant to help provide a pathway into the inner sanctum of evil so that light can destroy it at its source.