A walled town surrounded by pastoral fields, Daggerford's territory includes not just the town and its immediate fields, but also a handful of small hamlets for a day or two around it. The Daggerford family who rule the town style themselves "dukes" and "duchesses," and trace their lineage and right to rule back to the days when the area around Daggerford was theirs to govern in the Kingdom of Man that succeeded Phalorm in the region.

Though Daggerford has a duchess, daily rulership is in the hands of the Council of Guilds, composed of the heads of Daggerford's guilds. They meet in masks and robes, in imitation of the Lords of Waterdeep, although everyone knows who they are.

The largest and oldest building in Daggerford is the ducal castle, a three-level keep enclosed by a two-story wall that contains its own smithy, parad ground, and stabling. The dukes of Daggerford have always kept a well-stocked larder, capable of feeding the castle's inhabitants and any citizens that it might shelter inside during a siege.

A militia guards Dagggerford. Service is mandatory for all able-bodied adults, and lasts for twenty years. All citizens living within the town receive instruction from the duchess's own soldiers in the use of spears and other weapons, and must spend at least one day a month in defense of the town, standing sentry on its walls, or patrolling the nearby roads. Their training means that the common citizens of Daggerford aren't easily cowed by armed folk demanding goods, coin, or passage, and are slightly more likely to take up work as mercenaries, caravan guards, or adventurers.

The following places use the numbers from the map of Daggerford. 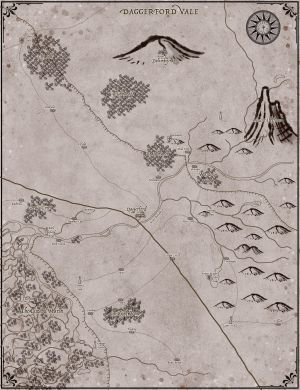 The lower part of the River Delimbiyr, centered on the town of Daggerford, is called the Daggerford Vale.

Most folk of Daggerford know one another, at least casually, by sight. Strangers are usually welcome, especially if they have coin to spend, unless such folk come armed and belligerent through the town. Guards stationed at each gate make note of new faces, but don't take action against those they don't recognize unless they are given reason to do so.

These characters serve the Duchess Morwen directly, usually with positions of authority around Daggerford.

The High Road passes right past Daggerford, providing a great deal of access for trade and travelers. Tyndal's Bridge is a low stone structure over which travelers pass when approaching from the west, where a local boy named Tyndal held off a number of lizard- folk with only a dagger. He grew to manhood, married the local ruler's daughter, named himself duke, and built Daggerford atop the ruins of an older castle.

The Delimbyr River flows right beside the town of Daggerford, and part of its flows are diverted off to form the moat around the castle.

The cold hand of the Frostmaiden grips the Trade Way through the Daggerford region for much of the winter months. The end of Marpenoth is (usually) the time of the last "reliable" caravans on the Trade Way, due to the many cold, cloudy, wet days in Marpenoth making it a “month of mud.” When it rains, the cold and overcast keeps a lot of water from "burning off" in full sunlight, because there's so little of it, and the road gets muddier and muddier.

Some stretches of the road, particularly through rocky regions, stay open longer, and, during the winter months, emergency supplies can be moved over short distances by "wagon sledge" (giant covered sleds). But inexpensive, reliable travel fades away as one starts into Uktar. An early winter would make parts of the road impassable by mid- Marpenoth or a tenday later; a late winter might make travel possible until mid-Uktar, but no one could "count on" that, so the late caravans would be run by risk-taking caravan masters who would charge high rates to shippers (making only small, light, valuable cargoes profitable). A mild winter really doesn't help shift the dates, but a rare (one in thirty) drought winter will.

During the winter months, exposure to the cold plus marauding wolves and the like make caravan travel prohibitively expensive, as traders would have to bring along extra guards, and carry food for the carters and the guards and the draft animals, plus fuel to keep them all warm, driving up costs. Once snow gets deep, draft and pack animals find it really tough going, so only light, small, very valuable cargoes that aren't harmed by freezing (like coins and messages and certain alcoholic drinks and perfumes, and a few gems packed in clay or other protective manners) would be moved overland until spring.

An early spring would make Tarsakh the only mud- month around Daggerford, so wagon travel could start up at Greengrass, and be in full spring as Mirtul proceeded. A late spring might prevent wagons moving until mid-Mirtul. Again, the problem is a month of road-mud as the thaw coincides with frequent rainfalls (the reason Tarsakh is known as the month of storms).