Eriadu, it's said, is a Core World in all things save location. But while the planet is inarguably on the Other Rim, it sits squarely at the most prestigious, economically vital, and strategic spots in the entire region: the intersection of the Hydian Way and the Rimma Trade Route. Eriadu is a badly polluted factory world of rugged landmasses and shallow seas.

For years it was known more for its delicate shellwork jewelry than for its economic might - but all that changed under the guidance of the Quintad, five powerful, ambitious Corulag families who emigrated to Eriadu nearly a millenium ago. The Quintad - the most famous branch of which is the Tarkin clan - remade Eriadu into a manufacturing giant with prestigious shipyards, seeking to turn their world into "the Coruscant of the Outer Rim." They largely succeeded: few mention Eriaduan shellwork anymore. (Which is just as well - the Eriaduan flow-mollusks are extinct, the victims of increased ocean acidity.)

Eriadu was a flashpoint during the Clone Wars. A Republic bastion amid Separatist sectors, it served as the headquarters for the Greater Seswenna's Sector Army, overseen by Wilhulf Tarkin. Wilhuff Tarkin was granted command of the Seswenna sector upon Palpatine's restructuring of the galactic government, and as a Moff, Tarkin established his administration on Eriadu and made it the sector's capital.

Tarkin's decision took advantage of the system's industrial, commercial, and strategic importance and provided a semblance of Core Worlds culture for Imperial and noble representatives from Coruscant who had been posted there. Under Tarkin's rule, Eriadu's manufacturing grew, its exports of technology increased, and corporations with interests there thrived. The shipyards above Eriadu are also the most important Imperial drydocks. 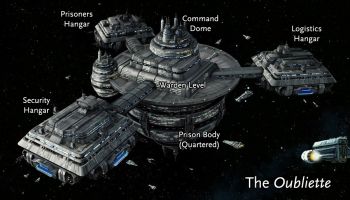 An Imperial-run orbital prison, the Oubliette is a prison that harbors many of Eriadu's criminals whose crimes either do not warrant execution or who have more value to the Empire alive than dead (for now). The Oubliette consists of a central body - called the Prison Body, a term applied to both the place and those incarcerated there - that is divided into four Quarters. Quarter Aurek is where important political prisoners are kept, and the wing is almost entirely solitary confinement cells and interrogation rooms. Quarter Besh contains insurgents and thought criminals, as well as the mechanized "reeducation" centers to which they are subjected. Quarter Cresh is basically the "rabble block", where prisoners of no particular importance or severity are located; they are frequently used as conscript workers by the Empire in Eriadu. Finally, Quarter Dorn houses actual underworld figures and career criminals.

Above the Prison Body is a Warden Level where the security forces work and live, along with armories and communal spaces for guards. Though the prison maintains a work force of stormtroopers, they are largely for emergency purposes, as the day-to-day tending of prisoners is done by a force of security droids. Above the Warden Level is the Command Dome, where the Prison Administrator, and a team of other bureaucrats, administrators, and technicians live and work. Three hangars are separated from the main body of the prison by passageways that can be ejected from the main body of the prison in case of riot or similar situation. Each of these hangars has weak sublight engines allowing them to be maneuvered away from the station and back into link-up with it should the need arise, and each also has weapons emplacements.

The Security Hangar is home to a variety of starfighters and gunboats intended to defend the prison; notably, they maintain a small group of TIE bombers whose ordnance pod has been replaced with a troop carrier, docking clamps, and cutting lasers to allow security forces to breach the prison anywhere along its bulkhead. This hangar space includes troop quarters for pilots and technicians above the hangar proper. The Logistics Hangar is where supply ships and the vessels of visiting officials dock, and includes guest rooms for such personages. Finally, the Prisoners Hangar is where vessels transporting prisoners are directed, and include a series of temporary cells above the hangar proper where new arrivals are kept until they can be processed properly.

Eriadu's climate is polluted and an orange haze appears in its lower atmosphere; the world is dominated by heavy industry, and toxic by-products spewed from numerous unregulated factories fouled its air, land, and sea. Most of the inhabited regions on Eriadu are heavily industrialized with blocky, utilitarian architecture. The advanced waste disposal systems, atmosphere scrubbers, and aquifer purifiers that are used on most prosperous worlds are absent on Eriadu.

Eriadu Manufacturing, the largest employer on the planet, is by far the greatest polluter, and its processes are directly responsible for much of the environmental damage inflicted on the planet's ecosystem. The rapid industrialization of Eriadu drove most of its native species into extinction; the Eriaduan rat, which thrived in the new environment, was one exception. In spite of its pollution issues, Eriadu is an active hub of trade and government in the Outer Rim Territories. Eriadu imports foodstuffs, medicinals, and lommite ore, and exports computer technology, manufacturing, textiles, and droids.

Humans comprise 86% of Eriadu's population of 22 billion. Eriaduan men tend to wear turbans and beards while women are veiled. Notable Eriaduans include the Tarkin family. Many if not all Eriaduans are also Humanocentric. The Eriaduan accent is distinctive, and is said to be "more Core than Core".