A relatively recently ennobled Waterdhavian House, the De'spris have two sources joined to form them: the first, a line of magistrates who have served the city of Waterdeep for nearly a century, and the second, a family of alchemists and herbalists whose arts became in great demand during the Spellplague, when magical goods were unreliable.

The family has always taken great pride in their blood's connections to both Waterdeep and the land, with the second so strong that many generations often have one or more scions of the De'spris capable of wielding druidic magics.

Lord Lelar prefers keeping most of his family at arms' length. As such, only about half of the family resides in Waterdeep, with most of the others overseeing various De'spri operations elsewhere. There are two other distinct branches, both cousins to Lord Lelar. 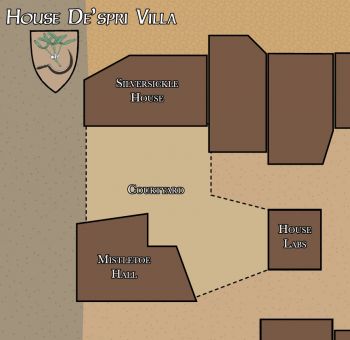 Scions and agents of House De'spri in good standing might receive the following benefits: