Founded just shy of two hundred years ago, House Durwald was born of a scandal. House Zarovet, one of the Houses of the relatively-newly settled Three-Rivers, rose up against the Wardens of Three-Rivers, House Kylevrus, seeking to seize that wardenship for themselves. However, the Zarovet schemes were revealed by one of their bannermen, a knight by the name of Sir Rigmund Durwald. Although it meant betraying his oath of fealty to the Zarovets, the treachery was stopped and a grateful House Kylevrus raised the Durwalds to House status, splitting the old Zarovet domain between the Durwalds and the innocent survivors of House Zarovet, organized into House Filendus.

In more recent history, the consort of Lady Gemma Durwald rained glory down on House Durwald through the founding of Gatewatch Academy, a school of military tactics and commander's training. Even today, many knights, commanders of House forces, and others with the sponsorship to attend are taught the tactical brilliance of Ludogranz Durwald. Although he died ten years ago, House and academy still continue to run strong, thanks to talented family and loved ones who uphold his vision even today. 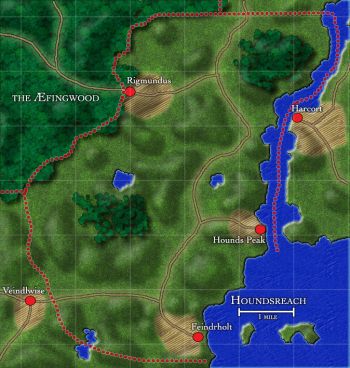 At the mouth of the Peakesriver, where it flows into the Bay of Lances, House Durwald has been given a modest parcel of land as their domain. Although it is smaller than the portion allotted to House Filendus, it is arguably richer land, prime vineyard country and a river mouth that could conceivably serve as a trading port at some point in the future. For the moment, however, these lands – green with the many vineyards of the domain – are home to a few small hamlets, the largest of which, Hounds Peak, is home to both Durwald Hall and Gatewatch Academy.

Seat of House Durwald • Hamlet
Households: 29 (Bounded 5 • Tenancies 1, Leases 17, Guilded 6)
Hounds Peak is the small hamlet that serves as the seat of House Durwald. A sharply rising outcropping sticks out a bit over the Peakesriver, with row after row of grape trellises marking the rise in the land, and Durwald Hall at the top of the rise. At the base of the rise sits the Gatewatch Academy military academy, and spread out from that is the small collection of buildings that form Hounds Peak hamlet proper. As the main trading outlet in Durwald territory, Hounds Peak has an inn and a few taverns, as well as some craftfolk, but by and large its folk are like those in the other Durwald hamlets, working in either fields or winery.

Hamlet
Households: 11 (Bounded 1 • Tenancies 1, Leases 7, Guilded 1)
The tall sea-cliffs of Feindrholt overlook the crashing waves of the Bay of Lances quite a distance below the hamlet. Feindrholt has a half-ring of old wrightfolk barrows that define one of its edges, and many of its folk have the wrightfolk look to them, although most of them live as any Imperial citizenry do. 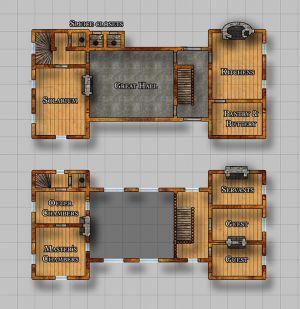 The northern-most Durwald hamlet was named for Sir Rigmund, who built a hunting lodge in the area which gave him access to the nearby Æfingwood, a small local woodland where he favored hunting. Though the wood is not technically part of the Durwald domain, the House has long held hunting rights within it, although they are not the only House in the area to do so.

The troops trained to defend Houndsreach and Durwald Hall. They are trained in Awareness, Endurance, Fighting, and Healing.

Part of the academy's education includes service as part of the Durwald forces in times of trouble, prepared to defend it and House Durwald if called upon to do so. They are trained in Athletics, Awareness, Endurance, and Fighting.

Servants of the House