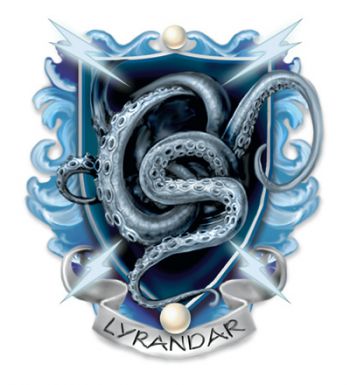 House Lyrandar bears the Mark of Storm, using its power to dominate the shipping trade and shape the weather for economic gain. Members of the house see themselves as the heart of the Khoravar (or half-elf) race, divinely chosen to guide their people into the future. The Lyranadar viceroys are proud and ruthless: lords of wind and water, with powers any king would envy. The development of the airship has served to increase Lyrandar's already considerable power, and the house is poised to become one of the most influential organizations in Khorvaire.

Legacy of the Firstborn

Though the origins of House Lyrandar remain shrouded in myth, a few solid facts are known. Some twenty-six hundred years ago, a significant number of elves migrated to Khorvaire in the wake of the civil war in Aerenal that destroyed the line of Vol. Where elf and human settlements came into close proximity, intermarriage became common. However, when the earliest generations of half-elves were born, a good number of the elf settlers rejected them, leaving a population of half-caste children spread across human lands. Over the next six hundred years, this population grew.

According to house doctrine, the founders of Lyrandar were chosen by the gods themselves. The half-elves Lyran and Selavash were the first to manifest the Mark of Storm, both claiming to recieve their marks accompanied by visions of the sovereign lords Arawai and Kol Korran. The sovereigns hailed the duo as the true children of Khorvaire. the half-elves were a race made strong through their hybrid blood, and would wield power over both nature and commerce.

In the decades that followed, Lyran and Selavash traveled across Khorvaire, preaching their vision to others of their kind. Tales of miracles performed by the pair are common, but all that can be said for certain is that both possessed an almost supernatural ability to inspire others of their race. The charismatic duo encouraged half-elves to form their own separate communities and to recognize themselves as a unique race - the Khoravar, or "Children of Khorvire." Their followers began to call Selavash and Lyran as the Firstborn, naming themselves "children of Lyran" or Lyrandar.

As proscribed marriage within the Khoravar community began to make Lyrandar a line of related families, the Mark of Storm spread through those families with great speed. Those blessed by this magic soon became House Lyrandar, operating a small fleet of swift ships and providing fair weather to farmers in need. Long after Selavash and Lyran had passed away, legends of the Firstborn continued to spread. To this day, a good number of Lyrandar believe that the spirits of the founders still guide the house.

Like many dragonmarked houses, Lyrandar's fortunes have shifted with the end of the Last War. The Korth Edicts placed limits on the houses owning land and maintaining military forces, but with the collapse of Galifar, Lyrandar has been able to circumvent both restrictions. The house owns a number of stormships, ostensibly to defend its fleet against piracy. The house has also developed extensive holdings in Valenar, and appears to have considerable influence there.

The war between House Cannith and House Lyrandar began with the destruction of the Lyrandar Flag Air Ship. Lyrandar always insisted Canniths involvement in the incident, an act House Cannith emphatically and passionately denied.

Rumors later circulated about Origin Cultests were somehow in league with the Cannith house, and presumably had some sort of affiliation, which was never proven.

The two houses began a massive arms races, once the Cannith House collapsed beneath the Brohym empire which led to the largest, bloodies period in the City's history.

Despite the constant attacks, sacking of their holdings and corporate espionage the Lyrandar house was able to stay in power, at great costs.

Later after the wars, scholars would debate for years that eventhough Lyrandar survives the war, that the house 'died' during it, leaving in its wake a darker, pragmatic house

The Windwrights Guild, with its dashing pilots and sleep elemental craft, is the public face of House Lyrandar for most Khorvairians. However, by virtue of its influence on agriculture, the smaller Raincallers Guild arguably has a larger impact on life in Khorvaire.

Common belief holds that captains who choose to work outside the guild are likely to suffer "accidents" ranging from deadly weather to sabotage or piracy. Regardless of whether Lyrandar truly engages in such sinister practices, the rumor alone is enough to convince prospective clients to rely on guild shipping, forcing most captains to work within the guild. The sailors of the Lhazaar Principalities are a notable exception to this rule, and there has long been tension between the Windwrights and the eastern sea lords.

The matriarch of House Lyrandar has her seat in Stormhome, an island off the northern coast of Aundair. Lyrandar mages transformed this once-desolate island into a paradise, and it is now home to a number of Ghallanda resorts in addition to the Lyrandar enclave. An Aundairian garrison stationed on Stormhome protects the entrance to Scion's Sound, but the island is informally considered House Lyrandar's territory. It has long been a hotbed of intrigue.

Beyond Stormhome, House Lyrandar has enclaves in most major port cities of Khorvaire, in addition to land in Valenar that it holds in violation of the Korth Edicts. The Valenar elveshave little interest in fallen Galifar's laws, and this suits Lyrandar well.