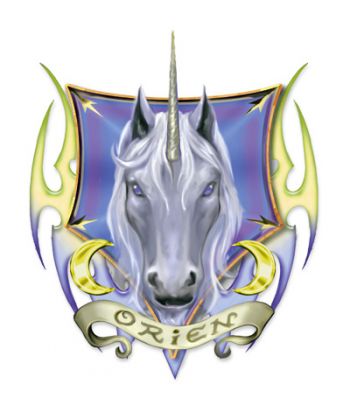 The house of transport and transit, Orien is a name known across Khorvaire. No other house directly touches as many lives, whether through the lightning rail that once connected the great cities of the Five Nations, the caravans that traverse rural lands, or the couriers who deliver letters and packages virtually anywhere.

House Orien's businesses have been pervasive (and provitable) since before the appearance of the Mark of Passage. However, the Last War took a heavy toll on this house - one from which it has yet to recover. After decades of effort, House Orien had spanned the Five Nations with its lightning rail, but the war and the Day of Mourning shattered the house's intercontinental links. Today, the organization is bent on recovery, but fresh competition from House Lyrandar and the instability of Khorvaire's new age are challenges the house has yet to overcomes.

By Road and Rail

House Orien began as a collection of merchants and teamsters, forming caravans that moved around pre-Galifar Aundari and beyond. They manifested the Mark of Passage nineteen hundred years ago, enhancing their skills with supernatural abilities that swiftly allowed them to dominate the roads of central Khorvaire. The dragonmarks were a celebrated phenomenon by this point, and the extended Orien family established itself as a dragonmarked house in short order.

In the days before Galifar, few except the couriers and caravans of House Orien could cross the boundaries of nations and the holds of minor warlords in safety. With the help fo the Mark of Passage and a knack for diplomacy, it became possible for Orien messengers to send information and packages from one end of Khorvaire to the other, with an excellent probability that the goods would arrive intact and in time. Orien caravans also carried human cargo, and as workers and explorers moved across the continent, the house became one of the primary forces driving the commonality of culture that marks Khorvaire today.

Even as Orien's mundane transportation services connected the Khorvaire of the common folk, the Mark of Passage provided the house with services so exclusive - and so expensive - that few but kings and queens could afford them. In a united Galifar, nobles who might once have fought each other were forced to curry diplomatic favor and entertain their peers at court. However, the vastness of Khorvaire (not to mention the land's many dangers) made mundane travel for a royal retinue impractical at best. As such, the teleport ability of the greater Mark of Passage quickly became Orien's most requested (and most profitable) service. Effortless and instantaneous travel between the courts of Galifar helped establish the foundation of communication and trust among the nobility that allowed the new kingdom to thrive.

As its routes stablized and Galifar grew, Orien took on a royal commisssion that seemed like little more than a dream at the time: to connect Galifar's cities with a highspeed transport that would allow travel across the kingdom in a matter of days. In 811 YK, the first lightning rail line was established between Fairhaven and Flamekeep. In 845 YK, King Jarot announced his intention to see the lightning rail connect every corner of Galifar, a talk that Orien completed in less than twenty years.

With lines of conductor stones spanning the Five Nations, Orien controlled three crown-subsidized lightning rail routes, all running through the heart of the nation in Cyre. From its humble origins on the trails and trade roads of Aundair, Orien had grown to the house that held a kingdom together.

What Orien had built over a lifetime, the Last War shattered in two terrible events. The first of these was in 899 YK, when the White Arch Bridge across Scions Sound was destroyed, most likely by the order of King Kaius I. The bridge, which connected teh city of Rekkenmark in Karrnath with Thaliost in Thrane, was an indefensible liability for both nations, but when it fell, Orien's primary east-west link across Khorvaire fell with it. In the aftermath of the war, many have spoken of the need to rebuild the bridge. However, Orien cannot afford the expense of reconstruction, and Thrane and Karrnath have little reason to want their kingdoms linked across the sound once more.

The second and more devastating loss happened on the Day of Mourning. Orien's three routes met at Metrol, the crossroads of Khorvaire, which was destroyed in the cataclysm that razed Cyre. Orien still maintains that the Cyre lines are intact, but the house has yet to send a commercial coach into the Mournland. Reports from explorers in that wasted land hint that many conductor stones have been stolen, leaving gaps large enough to derail a coach.

Since the war's end, Orien has managed to go some distance toward offseetting the loss of its profitable lightning rail runs with its other courier and transport services. At teh same time, the viceroys of the house are determined to reclaim their former wealth and status, but they know that doing so will require allies. The Five Nations might never again be one, but the house hopes that the leaders of those nations can be convinced of the need to reforge links to each other's lands.

The day-to-day issues of coordinating lightning rail traffic, hiring and paying caravan crews, and overseeing the movement of goods and passengers are handled by the Couriers Guild and the Transportation Guild. The house acts as a managing company, keeping its share of the profits and overseeing the guilds' decision-making processes. Most members of House Orien work for one guild or the other. Nonguild members of the house typically deal with the other houses or the governments of Khorvaire.

As a side service, the guild also employs an elite group of agents who specialize in secure and high-risk delivery scenarios. If the destination is dangerous or remote, or if the item or information to be shipped cannot be entrusted to the raid or open road, the Couriers Guild has options for those who can afford them.

Couriers typically understake a good number of low-risk assignments before they are entrusted with sensitive documents or goods. All couriers undergo a thorough investigation of their character before becoming members of the guild. Those who have proven their worth and are of sufficient level (usually at least 5th) can become special couriers, taking on high-profile assignments.

The Transportation Guild's teleportation services are typically available only at house enclaves. Once the province of nobles and the dragonmarked viceroys, teleportation has taken on a new significance for Orien in the aftermath of the Last War. In the age of exploration, a new class of adventurers and mercenary heroes often has the need (and the coin) to her those Orien heirs with the greater or Siberys Mark of Passage. In particular, the greater teleport ability of a Siberys heir allows instantaneous travel from mainland Khorvaire to the wilds and riches of Xen'drik. Faced with the prospect of a dangerous, month long voyage across the Thunder Sea, many an adventuring party is willing to cobble together the 5,000 gp required to teleport directly from Sharn to Stormreach.

As they did all through the Last War, Orien teleporters continue to do a steady trade with the nobility and the dragonmarked houses. The politics of Khorvaire have never been in greater flux, and the ability to instantly meet with one's allies - or just as instantly send spies into the court of one's foes - is the foundation of the alliances and intrigue that make up the modern age.

The families that made up House Orien were originally spread across Aundair, but their transformation into a dragonmarked house created the need for a home. They chose a small town that they renamed Passage, building their main enclave and headquarters there. This they called "Journey's Home," in reference to the amount of time most house heirs would be away from it.

Journey's Home takes up roughtly one-third of the mdoern city of Passage. It employs nearly half the city's workforce in one capacity or another, with a considerable number of devoted to the construction and maintenance of lightning rail carts and caravan wagons. Research into new magical methods of transport and shipping is centered at Journey's Home, and most spellcasting heirs make their homes there.

All members of House Orien are expected to spend time at Journey's Home, learning the behind-the-scenes aspects of running the house and guilds as they keep up with the industry Orien has created. Guild hirelings might visit on occasion, but such trips are rare, and usually presage advancement or individual honor.

In addition to Journey's Home, House Orien keeps enclaves in Sharn, New Cyre, Varna, Korth, Regalport, Krona Peak, Flamekeep, Taer Valaestas, and Trolanport. The house also has outposts and offices in nearly every town on the trade roads and lightning rail routes of the Five Nations and beyond. Most of these offer the services of one or both guilds. Aside from House Vadalis, Orien is the only dragonmarked house to have a significant presence in the Eldeen Reaches.

House Orien maintains a number of lightning rail coaches that act as moblie enclaves for important house members. Used exclusively for house and guild business, these coaches are not held to any timetable, and are given priority on the lightning rail lines over commercial and private coaches alike.