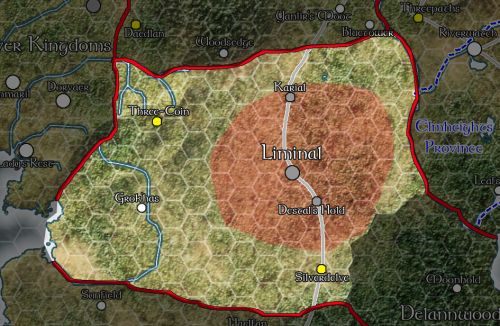 The Liminal Plains have been a place of freeholders for centuries. Mostly consisting of farming communities, or miles after miles of wind-swept grassy plains, the central grasslands of Rinhony are no longer under the protection of the stridently neutral Accord of Liminal. Where once these plains were among the safest places to travel on the continent, now they are among the most dangerous, thanks to the Liminal Incursion, an area over four hundred miles across where aberrations and other twisted horrors have escaped from shattered Liminal.

Once a shining metropolis of wonder beyond imagining, Liminal was a planar cross-roads where the denizens of heavens, hells, the ifriti City of Brass, a vast planar river trading city, the Feywild, the Shadowfell and even a city of githyanki met and mingled. It was a place of unrelenting variation and bountiful prosperity, where the folk of the planes met to trade and intrigue with one another.

Until the Shattering of Liminal. A band of adventurers known as the Company of the Rose & Thorn (named after their favorite inn in town) entered the ancient abandoned tower in the center of Liminal called the Wretched Citadel, and never returned. Two weeks later, cracks began to appear in the great Walls of Liminal, and out of those cracks slithered the nameless horrors of the Far Realms.

In less than a week, the city was overwhelmed. Most of its citizenry were slaughtered or fled the city in the first three days, and several companies of adventurers - notably those of the Socity of Deeds Valorous - died fighting the menace. The Imbricate Cities connected to Liminal slammed shut their gates to stem the tide of the Far Realms monstrosities, and many of them continue to fight battles at those very gates to this day, desperate to keep the Far Realm from overrunning their settlements.

As for the city itself, it lays in ruins. By day, it is eerily abandoned, a place of dust, rubble and bones. When the sun sets, however, the myriad horrors that remain in the city creep out of their daytime sanctuaries, to go about the mad, cacophanous existences that pass for their lives. And when sets the sun, the Liminal Breach can be seen above the sky, a tattered mess of weird spatial distortions, with a great, terrible horror that peeks through occasionally and reaches down blind, grasping, seeking tentacles.

Towns of the Liminal Plains

The towns of central Rinhony - nominally within old Liminal's rarely-exercised influence - grew up as freeholds and solitary settlements, for the most part. Though they once enjoyed considerable freedom from the encroachment of other nations that did not dare to try and exert too much control so close to Liminal's gates, now they suffer for their placement. Watching for marauding horrors is now the order of the day in even those places that haven't been totally overrun by the Incursion.

The Guild town that was once the closest settlement to Liminal was also one of the first to fall. Three days after the strange flickering lightning began to fill the sky above Liminal, and the streams of refugees came flooding away from it as fast as horse, cart or feet would carry them, the aberrations of the Incursion followed. The small town's resources were already vastly over-stretched trying to shelter those fleeing Liminal and it could do nothing to stop the rampaging monsters that came deep in the night. By morning the grell, nothics and chuul had all but destroyed the town.

Now it is an aberration-haunted ruin in the center of the Incursion Field. It acts as something of a central den for a great many of the area's monstrous scourges. There is almost certainly some kind of greater horror that dwells here, making of the ruins its lair, but no one has gotten close enough to ascertain exactly what that might be.

Across the Westfork River from the rest of the plains lies the newly-founded town called Grok'has, or "the Legacy of Grok" in the orcish tongue. Founded by a large troop of Warrens and other slum denizens fleeing Liminal on the nights of the Shattering, this band did not stop moving until they reached the river. Led by the human woman named Shareen and her three half-orc children, this band of half-orcs, orcs, bugbears, goblins and a smattering of others that dwelt in the old Warrens managed to do what so many better armed and organized could not do: survive the night of the Shattering.

Shareen yet lives, an elderly woman in her nineties. Her family has served as the leaders of the community over the years, all supporting her wise leadership. Under their hard efforts, Grok'has has transformed over the last fifty years from an armed encampment of terrified goblinfolk into a burgeoning town that serves as a trade-moot between the River Kingdoms and the Empire of Tamous.

Early in Grok'has history, Shareen made an impression on the king of Tamous, Ædomyr Ylrannin. With his death twenty-five years ago, however, and the ascension of his son, Ædelann, most of the folk of Grok'has know that it is only a matter of time before the newly-styled Emperor of Tamous seeks to absorb Grok'has into his growing empire. Indeed, most guess that it will happen once Shareen passes from life, and Grok'has is no longer a human-ruled town but a hold of goblins by outsiders' reckoning. Even now, Shareen desperately tries to get military aid concessions from Lady's Rest and Dorvaer in the River Kingdoms, but they seem disinclined to commit to war against Tamous.

North of Liminal once lay the corral-town of Karial. The surrounding territory was given over to a multitude of prosperous horse- and cattle-ranches, and its people did a lot to both feed and provide transportation to a great deal of Rinhony. Then came the Shattering of Liminal, and two days after the fall of Destal's Hold, the Tusked Master came to Karial.

No one knows exactly what the Tusked Master is, save that he towers some seven feet in height and wears a terrifying helm of a snarling boar's head crafted of some dull grey metal with a pebbled texture that glistens with its own strange slime. Unlike the unruly hordes that overtook other locales in the Field of Incursion, the Tusked Master's troops were organized and disciplined, consisting primarily of nothics and a small cadre of intellect devourer-possessed human lieutenants.

Karial today is a ringed military encampment, with a great tower of fell proportions rising at its center. The stone of this tower glows with a sickly gray-green light that can be seen for miles around. Even when the Tusked Master is away, it does not go without leadership, for Almanni spies report that Karial is also home to his second-in-command, a beholder with a strange hide that seems mottles as though by unwholesome growths.

A Guild freehold, Silverdelve is a mining town. Grown by the discovery of prosperous silver mines some century or so ago, Silverdelve is built on the ruins of an old dwarven outpost town. Like most such settlements, it was refurbished by the Guild and set back on the path to prosperity. Even without the produce of its silver mines, Silverdelve has been prosperous as a trading town between Liminal and Tamous.

Since the Shattering of Liminal, the Guild council of Silverdelve has known that their time is limted. The Field of Incursion has greatly slowed its advance in the fifty years since the Shattering, but it does continue to move. Theirs is the next settlement in the path of the Far Realms invaders and not even the Guild can determine if it would be too costly to try and stop them in their tracks.

Another Guild trading outpost, Three-Coin was once taken over by a tribe of kobolds and a strange shifter wolf-queen some fifty years ago. When the invasion was defeated by the Company of the Rose & Thorn, it seemed that Three-Coin stood the opportunity to become a major trading hub once more. Sadly, it never had that chance.

Though the Field of Incursion has never reached Three-Coin, the promise of its prosperity - that is, acting as a trade-moot between the River Kingdoms and Liminal - dried up with the Shattering of Liminal. Now Three-Coin is more of a military encampment, making its coin hosting the military units of various River Kingdom city-states intent on keeping an eye on the Field of Incursion's progress toward their homes.

Today, Three-Coin acts as a base from which scouts and small military bands - including companies of adventurers - can move forward to investigate the lands closer to Liminal for signs of progress against the River Kingdoms. Though still under the dominion of the Guild, the small settlement has become a dangerous frontier town, half populated by armed bands of adventurers and military units, many of whom have cause to dislike one another.