Age: 31
My name is Lucas. Me and my twin sister Laura were born and raised just outside Raleigh, NC. I was outed at age 17 when I was arrested by "homosexual proclivities" by an undercover police officer (after having performed said proclivities on the officer). The local police made the incident very public and my life became a living hell. I lost all of my friends and my father, who happened to be the police chief at the time, never spoke to me again and my mother filled her life with religion and wine. In an instant I had gone from being a local sports and Olympic-track archery super star to the abhorrent pariah. In 1964, as soon as I turned 18, I dropped out of school and moved to Portland. I still don't speak with my Dad and very little with my Mom, but my sister, with her successful job and magazine-perfect husband and kids has never ceased to tackle every opportunity to lecture me about my go-nowhere life. I adore her, though. She has never cared that I'm gay; just that I'm a loser. One positive thing that came out of the whole incident is that it marked me ineligible for the army draft in '69. Yay me.


Once I landed in Portland it was short order before I met Conrad and he hired me on to help him manage his comic shop, Excelsior Comics. Then he moved into a larger apartment and I moved into his one bedroom space on the 5th floor of Maple Shade, which happened to be in the same building as his shop. Then he stopped going to work, and I ended up managing the shop by myself. He's got a girlfriend I've never met and he spends most of his time with her traveling. I only see him for a day about once every two months. I live with my best buddy Krypto. She's a white German shepherd that I rescued as a pup.

Outside of work I hit the gym regularly, the whole body is my temple thing and all. I'm in a book club and I'm on a darts team at a nearby bar - we won state last year. I play D&D with a group of friends that I'd met at a club one night, having overheard them talking about kobolds and wyverns, haplessly luring me in like a fish on a hook to their table. I'm a member of an esoteric group, the Daughters of Portlandia. It's an all women group, but they made an exception for me. Although I'll admit, I'm mainly there for that special kinda hit of spirituality and the post-ritual potluck and socialization. I am serious about my meditation time, though. And I make a mean green bean casserole that they all love (secret: I put bourbon in it). Otherwise I tend to stay in a lot, watching tv with Krypto or reading books and comics.

1977
Lucas became very involved with salsa dancing and, while unemployed and no longer constantly fighting monsters, was inspired to do it professionally.
He leased a space and started Rhythm Dance Academy.  He teaches salsa dancing classes a few times a week and there are other instructors who use the space to teach various styles of dance.  They also host dance events.
There is also a classroom that a local AA group and an alien abduction support group use for meetings.
He hired Haywood as the building manager.
Lucas has also been helping out Matthew's staff when needed while he's been out of country.   He doesn't hit the gym anymore, having bought a weight bench that's in his office at the studio and with the exercise from dancing.
Lucas has put aside the bath houses and causal hookups in favor of a more committed relationship as he and Oscar have started dating.  They have date nights in; usually at Lucas' home.  Oscar comes over, makes them dinner and they spend the evening watching tv on the couch, reading comics and talking and/or in bed.  Oscar is also a regular on salsa dance nights.
Lucas has become more involved with the SCA, much to the delight of his gaming friends, but not due to their years of peer pressure - but because Oscar surprisingly loves it.  One part camping trip, one part dress-up and it's one of the few public places that he seems comfortable being more open about his sexuality - out in the woods with open minded folks who don't know him. Lucas, while a vocal proponent of bursting out of the closet, also understands cops - better than most, and so he accepts Oscar's choice to remain closeted.  He doesn't like it and sometimes there is friction when they're seen together in public and he's suddenly forced into the role of "just a buddy", but he understands it.
Lucas still plays D&D with his gaming buddies every other Saturday.  Danny retired as DM and now Laurie runs the game.
Lucas still has very minimal contact with his biological family.
Lucas and the Daughters of Portlandia have become more intertwined and he's become involved in a "deeper level" of the group.  Several of the Daughters have SEEN real magic now, some it turns out had already beforehand.  Together they learn and plunge deeper into the mysteries of the worlds to expand their understanding and their abilities.
They celebrate lunar and holiday rituals together, get together bi-weekly for essentially esoteric book-club nights and will often meet up in smaller groups for coffee, tea or to grab a bite while discussing things.
Evangeline continues with her keen interest in his ability.  She made him carry around and familiarize himself with a number of objects that she then took away.  Sometimes she will meet with him or on occasion call him and have him try and apportate an item she has stashed away somewhere.  She was particularly pushy one evening, and it was an Oscar date night - Lucas, stepping away for a bathroom break, managed to sojourn into her living room with her to tell her to stop it - the look on her face was worth the mental exhaustion afterwards.  He fell asleep on Oscar while watching Charlie's Angels.
Evangeline seemed content with his progress the next time she saw him and has backed off in her assertiveness.
Lucas also quit smoking.  Oscar hated it.
Lucas is now addicted to chewing on licorice sticks.
Oscar is oblivious to the secret world of monsters and magic and more monsters.  Lucas is desperate to keep him that way.  Keep him sane, safe and blessedly ignorant.  Oscar knows he's a spiritual and esoteric practitioner and considers it a cute and quirky eccentricity - and Lucas is content for that to be that.
Natalie has essentially become Lucas' invisible roommate.  As he is the only person who can see, hear or touch her outside of the Dark Room - as well as her anchor to the physical world, she's usually not too far for long.
Lucas brought her belongings that they had put into storage into the Dark Room and set up some comforts for her there, so she would have some space of her own.  And he brings her books, magazines and other things that she likes and urges the others to do the same.  This is where she tends to spend her time when Lucas has company or is occupied with other activities that she's not interested in, though sometimes she likes to go out for a stroll or creepily follow Harry around like an invisible stalker.  She enjoys attending the dance lessons, Lucas just has to make a point to remember that she's not actually there among the rest of the class.  There were some awkward slips in the early days.
She hates being ignored, even though she understands it - she hates it.  But it never seems to stop her from trying to have conversations with Lucas when he's at the grocery store, which she always insists on going with him to.
They watch tv together when Oscar isn't there and she's taken an interest in trying to teach Lucas how to cook - and then avidly watching him eat it - which is weird.  She says that through their connection she can *almost* taste it. 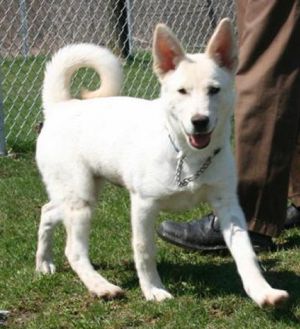 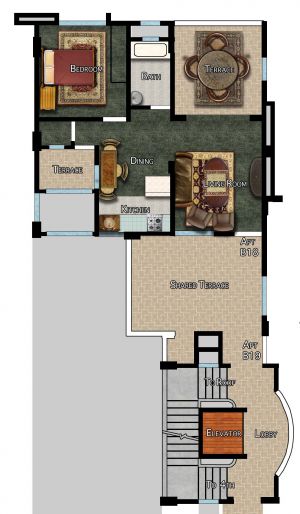 Apartment B18
Retrieved from "https://www.oakthorne.net/wiki/index.php?title=Lucas_Beloi&oldid=58595"