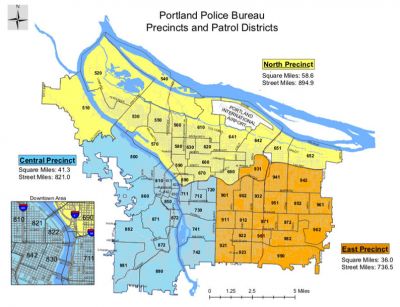 The Portland Police Bureau (PPB), officially the Portland Bureau of Police, is the law enforcement agency of the city of Portland, the largest city in the U.S. state of Oregon. While oversight of Portland's bureaus shifts among the five City Commissioners, the mayor has historically been assigned to the Police Bureau as the police commissioner.

The Portland Police Bureau divides Portland into three precincts, with each precinct divided into as many as 20 districts. The divisions are generally in accordance with neighborhood association boundaries, but also take into account the number of police calls generated in each district. The district serves as the basic unit of territory within the bureau, and most are assigned between one and two patrol officers. As such, busier districts are geographically smaller and slower districts are larger.