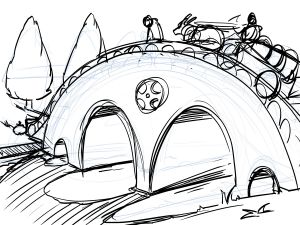 Population: 80,000
Monument is a city partially built into the edges of a small river valley/Canyon coming out of a mountain range. The sides of the Monument canyon have been elaborately carved in the images of the gods. Hundreds of divinities are depicted on the towering cliffs. The Isig river winds it's way through the valley, this close to it's headwaters, it is borh small and fast. A large wall has been built blocking the mouth of the Monument Canyon. Two gates go through the wall, one on either side of the river Isig, the River itself is sealed by a large iron grate.
Monument is built on a series of Terraces leading up the valley, these terraces are connected by a network of broad stone ramps and steep stairs leading up to the next level. Many buildings built close to a higher Terrace will have an arching bridge that leads further upwards. Each Terrace belong to a specific class of person, while not a true caste system, the weight of tradition and expectation keeps individuals living on the appropriate Terrace.

Terrace of the Soaring Spires

The Terrace of Soaring Spires is home to the Royal Palace and other Governmental Buildings, and is the smallest of the Terraces.

Terrace of the Gracious Servants

Terrace of the Sublime Gardens

This terrace is home to the Nobility, filled with Elaborate townhouses and a few estates.

Terrace of the Master Carvers

Terrace of the Wanderers

Terrace of the Perfumed Clouds

Outside the city walls • Spreads out to include Farms • Some slums, mostly wooden construction • A few small docks are on the river, but they are mostly for small boats and a ferry.

The Temples of Monument

There are sixty-four temples to various and sundry gods in Monument's canyon walls.