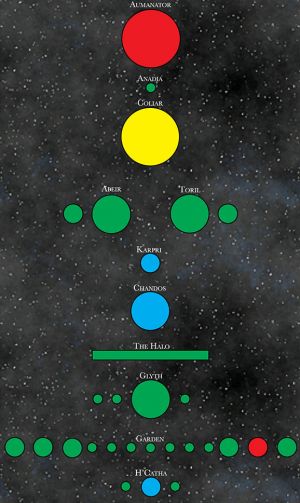 Size H Spherical Fire Body
The sun of Realmspace is a great fiery orb whose gouts of flame often host elemental entities. It is surrounded by spelljamming sargassos of dead magic, making it extremely dangerous to approach, and thus largely unexplored.

Size B Spherical Earth Body
A small orb whose mass is largely a series of interfolded canyons, Anadia's relatively temperate poles are home to halfling nations of moderate size, only the northern of which is friendly to spelljammers.

Size G Spherical Air Body
A great tempest-world in which float islands of earth and stone, Coliar is home to dragons, dragonborn, lizardfolk, and kobolds. Though none of their cultures are spelljamming themselves, nearly all of them are familiar with and welcome visitors – save for a handful of particularly territorial dragons, of course.

Size E Spherical Earth Body
A very populated groundling world that is largely ignorant of spelljamming, Toril is patrolled by a spelljamming navy that is largely secret from its populace. This organization – called simply the Academy – have closed Toril's surface to spelljamming traffic, although this doesn't prevent the occasional smuggler or pirate from sneaking past pickets to get access to the world's riches. The Academy's navy doesn't hesitate to deal lethally with those who violate their interdiction.

The sole moon of Toril is considered sacred to various lunar deities worshipped on that world, and likewise off-limits, defended by priesthoods and divine servitors alike.

Size E Spherical Earth Body
The orbital twin of Toril (hearkening back to the name "Abeir-Toril") is largely unknown. It is known to be home to primordial, elemental powers of great intensity which disrupt spelljamming magics. Those vessels that enter its atmosphere almost never escape it, and those that manage do not do so unscathed.

Size D Spherical Water Body
Shallow freshwater world, with polar icecaps. Karpri's inhabitants live on seaweed-sargasso islands, with a relatively primitive druidic society made up of mostly humans who dive and fish. There are also populations of reclusive sea elves.

Size F Spherical Water Body
A world covered by a sea with a rich mineral content, Chandos is best known for the floating rocks produced by undersea vulcanism. Something about these porous rocks float in the deeply saline waters, and folk link them together to form islands upon which they've established settlements.

The Rock of Bral

The Rock of Bral (city-sized) remains in orbit around Chandos, soaking up the vast majority of spelljamming traffic into the area.

Asteroid Belt
A thin belt of stones with a high crystalline content which reflects sunlight as a golden, amber-ish hue.

Size E Spherical Earth Body
With three moons and a ring about it, there is no mistaking the red-grey Glyth from afar. Covered in fast-growing trees, Glyth is frequently ravaged by forest fires, giving its atmosphere an almost permanent soot-stained haze.

A massive hollow asteroid city that began as neutral ground between various illithid societies, and has become the foremost gathering place for pirates, slavers, assassins, and other unsavory folk in Realmspace. It is defended by a fleet of illithid vessels.

Size A Spherical Earth Body
A cluster of asteroids bound together into a tightly-woven body by the roots and limbs of a strange singular plant, Garden is home to a remarkable variety of plant life. The only denizens of Garden are small dens of pirates, tucked away in the caverns between asteroids, allowing them to remain unseen. There are no other denizens, although spelljamming ships occasionally stop off to refresh air and gather fresh food. Garden is also known for its twelve moons, several of which are strange and unique in some fashion.

The furthest of Gardens twelve moons bears a small village-sized trading outpost (town). Because its trading pipeline is one of the few easily-accessible source of goods to the pirates of Garden, it is considered neutral territory among them. Though it is supposed to remain so to everyone, this doesn't stop the occasional navy or privateers who are hunting pirates from pursuing quarry into its streets, although doing so is a good way to incur the wrath of all the pirate navies of Garden.

Size C Flat Disc Water Body
A small disc of water spun out around the equator of a single, massive mountain called the Spindle, H'Catha is exceedingly dangerous. It is home to multiple infighting clans and nations of beholders, who constantly struggle for supremacy in seizing the peaks of the Spindle for themselves. H'Catha also has a pair of moons that orbit along the outer edges of the water-disc.