The Town of Ree

Given its rural location and difficult routes to and from other regions, the large size of the town of Ree is rather unusual. All of the main roads in the town are perfectly fitted stones of blue, white & grey, cut to create a design inspired by crashing ocean waves. The stonework of the grounds at the main plaza at the center of town is comprised of similarly cut stones of red, gold & other colors to create a massive sunburst design. Many new roads & paths have been built, most of which range from basic cobblestone to gravel and worn dirt paths.

Most of the town is constructed of wood, though some human made stone structures exist. The largest buildings, usually reserved for important city functions and residences, are remnants that had been constructed by the dwarves of Nir before they had vanished from the world. The dwarves of Nir often did not embellish their architecture with artistic nuances and style as the dwarves of Olmon were fond of doing. Their ziggurat structures were simple in design and practical, but where they lacked in decoration, they made up for it in technological wonders. The Nir structures are all equipped with running water, plumbing, hot and cold water, heated and cooled air conditioning, controlled lighting conditions and a variety of steam or hydraulic powered mechanisms, such as conveyance tubes capable of delivering messages placed in special cylinders across the town in minutes. There are some devices' uses that have never been determined, such as the crystal and brass device atop the Atheneum. This Nir ingenuity exists throughout the town as a whole; springs, wells & spigots for water, fountains, street lamps that light themselves without fire when it beings to grow dark, two halls with hot baths and the "Horn of Morning" (each day shortly after sunrise a rumbling bellow like that of a great horn resounds from within the earth and mountains - this is actually from the ancient Nir smelting forge deep within the mountain that is fled by lava flows, each morning the pressure valves are automatically opened to release pressure, which creates the sound that can be heard and felt in the ground for miles).

West & East of Ree: Beyond the town proper to the west and east are expansive farmlands, each run by a small village or hold that are home to a number of families. They harvest their crops and herds, keep what they require and bring the remainder to the town market to sell. As the climate in this region is very mild, with no harsh winters or severe summers, crops of many varieties can be grown and harvested at different times and brought to the ever busy marketplace to be traded with other farm holds or with the townsfolk for all sorts of crafted and manufactured goods.

South of Ree: To the south of the town is the town is the what most simply call "the wild". Lightly covered in forest, this region is the domain of the witches. The witches were here before the Reefolk settled here. The dwarves who were here before state that they had been there when they had fled the kobold takeover of Ree. The witches and dwarves had left each other alone, but when the Reefolk had come, the two had become deeply entwined with each other. The witches are healers, wise ones, masters of potions, poisons & cures, as well as a hex or a curse here or there when needed. While the witches continue to live beyond the town, they have become a vital part of it and recruit from the Reefolk population. Their wisdom, leadership skills and abilities had long ago earned them a place in the politics of the Reefolk. Their primary rivals being the wizards of the Atheneum, who largely see them as uneducated, superstitious charlatans & gossips, always seeing to stick their noses into things they have no right to be a part of and pushing people around. The witches similarly see the mages as arrogant & impractical, more interested in asking questions & researching than acting or doing.

The Caravan & The Winter Festival: Once a year, just around the start of Winter, a large caravan comes through Nir from the northern nations of Ilren and the swamps of Kuth. Exactly how the caravan manages safe passage through the kobold infested halls of Nir is a mystery. Many have traveled with the caravan, people leaving Ree, people coming to Ree, and they all report having seen nothing out of the ordinary about the journey, save for the very poignant lack of kobolds. The caravan has been making this journey for many years and the position of caravan leader is handed off over time, but always to a brother and sister, and there is always one of the lizardfolk amongst them. The caravan brings goods of all sorts from all over Ilren & Kuth to Ree for buying, selling & trading, as well as visiting entertainers, craftsmen, messengers and people and products of all sorts. The significance of this caravan has resulted in a great annual celebration called the Winter Festival. The Reefolk, humans and dwarves, welcome the caravan and those that travel with it to their town, and all the farm steads, rangers, witches, Strong dwarves and other residents beyond the town, even the occasional hobbit from the Vale in the east come to celebrate and/or to trade. The caravan stays for one week and then it departs early in the morning, heading back north into Nir and the lands beyond. It has become a tradition for many of the townsfolk to follow the caravan, making merriment as the caravan minstrels and fools play music and dance about behind the main host. They stop following and the music stops as they reach the massive Nir Southern Gate. In silence the people of Ree watch as the now silent caravan vanishes into the darkness beyond the gate. Then they quietly return to their homes and resume their normal lives.

Significant Structures & Locations in or Around Ree

The Origins of Ree

Before the fall of Nir, a busy trading community had been established just south beyond the mountain gates. The community grew into a town, where humans, dwarves, halflings and other natives to the region south of the Taren Mountains would come to trade with each other. The town was named Cairdeas, which means "friendship" in the Nir language.

When the Nir vanished many of the residents of Cairdeas fled the town in fear of it happening to them as well. Trade and commerce quickly began to fade and eventually no one came to Cairdeas anymore. The few remaining residents left save for the Olmon dwarves that still lived within the mountain city. Cairdeas was abandoned.

Then the kobolds invaded Nir. From somewhere in the depths of the city, they surged forth in great numbers. The dwarves were overwhelmed and forced to flee or die. They found refuge in the abandoned town of Cairdeas. The non-dwarven crafted buildings had largely fallen into disrepair over years of neglect, but the dwarven structures above and the dwarven neighborhood beneath the grand plaza was perfectly intact. Other than the occasional night time raid, the kobolds seemed content to remain within the confines of the mountain city. The three clans that had escaped Nir settled beneath Cairdeas and made themselves a new home.

Many years passed until the refugees fleeing the destruction of Al-Lorin discovered the ruins of Cairdeas above ground. All but the stone buildings & structures, roads & plaza had fallen and vanished by then. At first they thought they had found an abandoned ruin until the dwarves beneath the town warily appeared, prepared to defend their home from invaders. The leaders of refugees of Al-Lorin, all having belonged or served the Wizards of Ree, sat down with the dwarven clan chiefs and discussed cohabitation of the town. A peace was made and the human refugees were welcomed to inhabit and rebuild the town above.

The town above was named Ree, after the faction that the refugees had belonged too, and they were collectively the Reefolk. The old name of the town was lost with time, very few having actually ever known it, and the meaning of the new name would also be lost with time, save to the wizards & scholars who guarded such secrets from common knowledge - they preferred to keep their role in the destruction of Al-Lorin a secret, thus why they adopted the symbol of Corinth the Rat, the god of secrets & mysteries, as part of their orders seal. 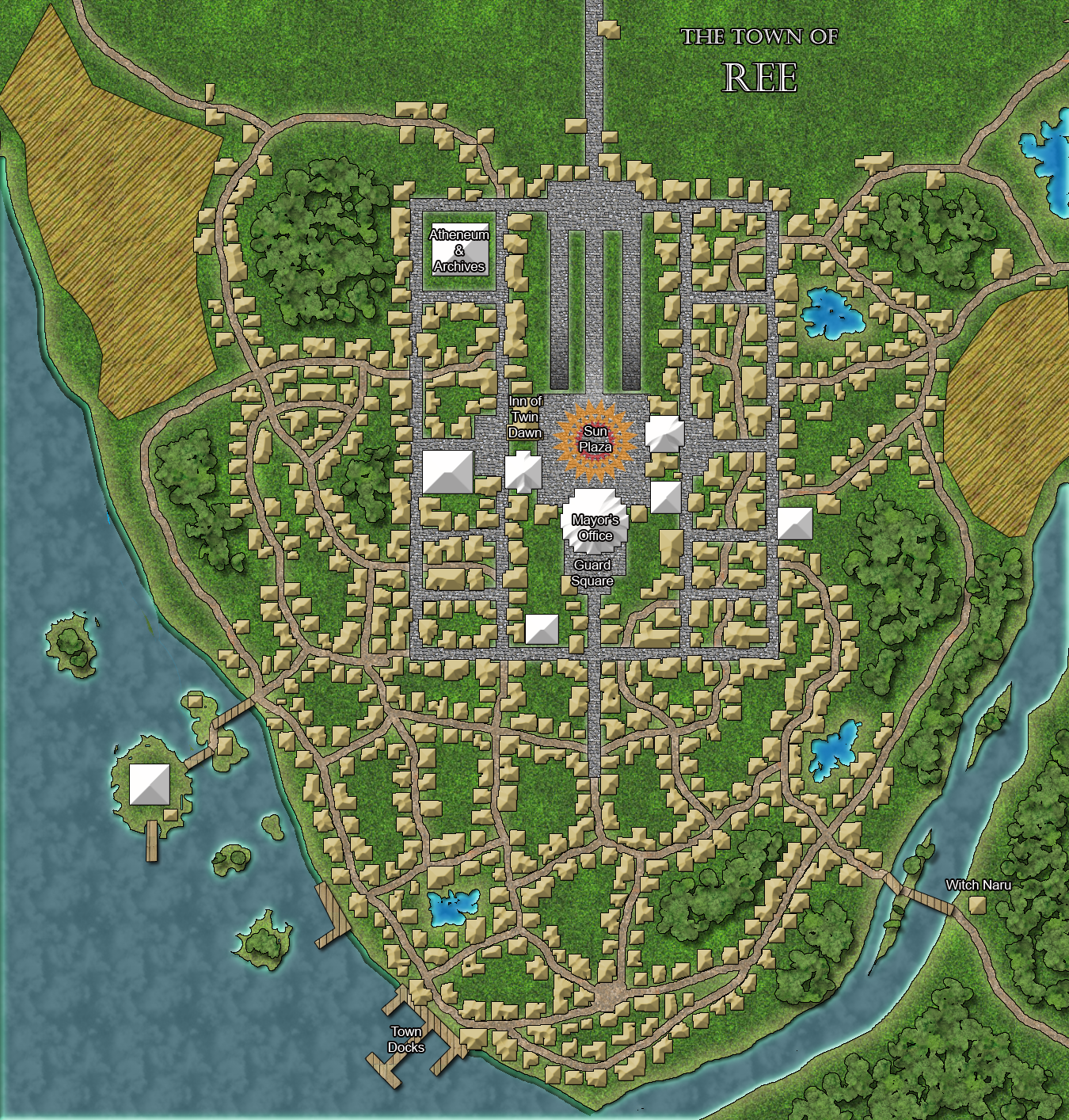 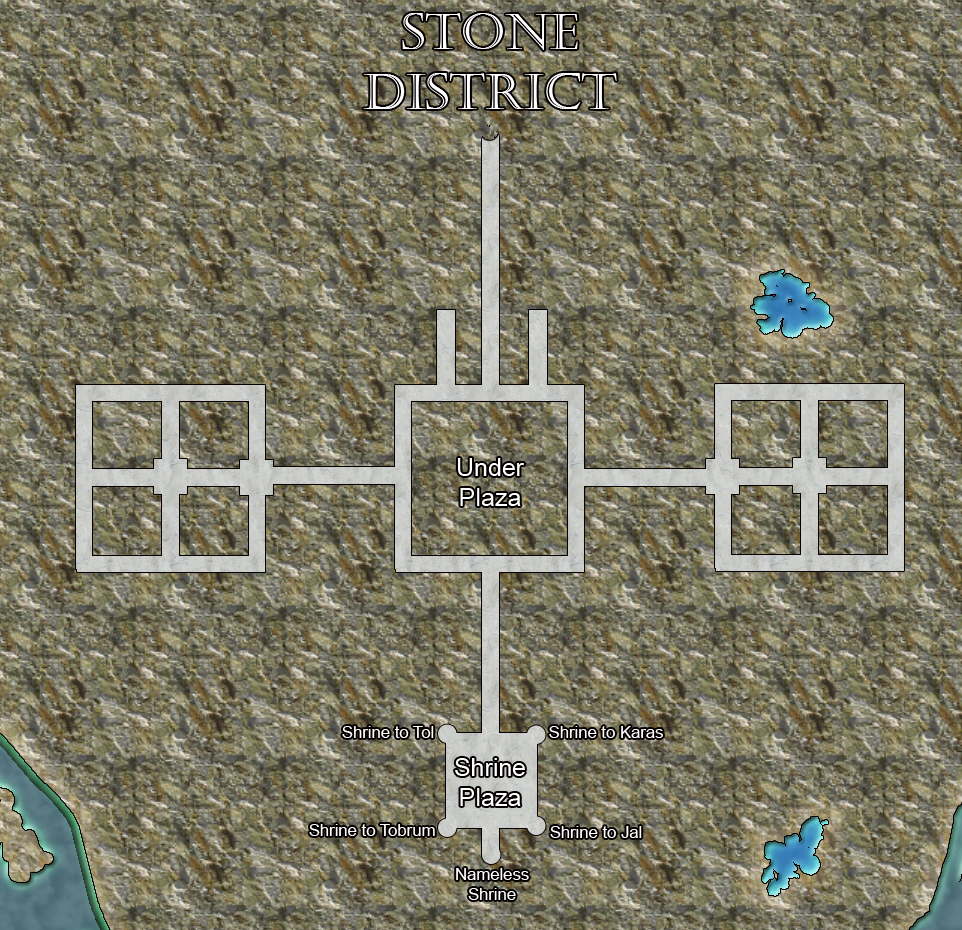