Until you stalk and overrun, you cannot devour anyone.
-Hobbes

Riael carries with him a handmade journal with pages that vary in thickness and color due to the variety of hides that have been used to make the pages.

When he needs more pages he takes either a hide he has stored or from a fresh kill from dinner. He painstakingly washes the hide with water and lime and soaks it for days to remove all the hair and treat the skin. He then uses a special knife only used for leather work finish cleaning and splitting the hide into multiple sheets. This whole process can take up to a week so he usually has extra blank pages when he makes new ones and rarely goes a few days without doing part of the process.

If asked, he would explain that as part of his druid training Master Levin made him do this everyday in an ongoing process. It infuriated the cub at the time, but the discipline, focus, and patience it takes to complete the process successfully helped Riael learn some of his most foundational lessons. He continues to do this process by hand even after he was not required to remind himself of the early lessons as well as the value of sacrifice.

Master Levin always said, "the past is like prey. You must understand it to overcome it."
Whatever that means.
If that old man didn't have a bloody saying for everything I might have learned more before he died. Or maybe not. He always said I was more of a knot in the tree than a supple branch. Though he said that would serve me well. I think that was a nice way of saying I'm a good meat shield.

Where did it all start for me. I guess my earliest memory was when I was just a cub. I remember blood and pain. The bodies of what must have been my parents ravaged before me. Bloody paws. Bloody fur. And pain. All over me is pain. I should have died there. But Mother Kyanna moves nature and the nature of things in chaotic ways. I was saved by, of all things, a Dwarf. Stoergrim was his name but I wouldn’t really remember his name until I met his brother. Stoergrim tended my wounds and took me to a Hearthfire where he revived me on the food of his people. I guess it IS like Master Levin says, not all wolves are loyal to their pack, not all lizard folk are killers.

This Dwarf spent uncountable moons reviving me before setting me up in some god-awful home for other lost cubs like me. I know now that what he did was probably for the best but I hated it there. I ran away shortly after. I remember foolishly thinking I needed to find my home, my Aina. Find my parents. Find where I belong. Foolish because those things can’t be found, only given to you by yourself or someone else.

I can’t write down all the places that took me in. Tried to make me a kid of theirs. Tried to make their home mine. I wish I did because I was probably a nightmare to them. I didn’t know better but I felt like I could do it on my own. Find myself and my origins and find my place. That draw always took me to the forest. Until I got sick or too hungry or poisoned from a bad plant…each time I would come back wilder.
Less myself.
More lost than ever.

I don’t remember how it happened but I lost myself completely at some point. I don’t even know how long I was in that form, just that I was angry all the time, craved flesh, and hated everything. I was told later that the terror I brought to that forest was the reason Daergrim was sent to that same forest. I was in my all too familiar rage. My black bear form probably attacked Daergrim first and I know his bear mount must have fought back fiercely. I probably should have been put down then as well, but Mother Kyanna had sent another Dwarf to save me. At the time I thought it was the same Dwarf. That face and his eyes took me back to that Hearthfire where my life had been saved before. The care of a stranger let me live. I remember reliving those few days where I was taken care of like a cub should be. A father mending a cubs wounds. It was too much. I remember finding myself again. See the world through my own eyes again, only wet and terrible and full of vague horrible dream like memories of anger and hate. I yawled into the Dwarf’s chest like the day my parents died.
Probably worse actually.

Daergrim, like his twin brother, took care of me and helped me find my center again over the next few days. I don’t remember everything we talked about, but I learned he was the twin of the Dwarf who saved me all those green says ago. It was the forceful winds of Mother Kyanna that brought these Dwarves into my life.
It meant something.
It meant everything back then.
It was that moment I knew I needed to control this power in side me. I needed to learn my place in the cycles of Mother Kyanna. Be given a home. Find my Aina

In almost a laughable that shortly after I started asking about my powers, learning about druidic lore, Master Levin found me and took me under his mane. He was strict and firm. Made me do the most useless mundane tasks…I hated it all so much back then, but now I get it. The discipline and focus I was lacking gave me the structure and control I needed. It freed me from the tempest I had allowed my soul to be trapped by. Mother Kyanna had given me a special power which could ravage my heart and mind and create great distraction or be focused to heal and purify the land back to the way it must be. Master Levin showed me how destructive the Dwarven leaders have been to the land. He freely admitted his greatest weakness was his biases against the Dwarves but never told me why. He shared a similar view on the Archmagi of old but always reminds me that even the most venomous snake has a place in the great order of nature. The wicked Archmage Katrina was also the reason our people exist. I think Master Levin would say that was fate. I think Mother Kyanna just made beer out of a very very bitter root, which I think says a lot more about the world than just leaving it up to fate…

Once I learned how to actually control and follow the ways of the Druid, Master Levin and I traveled and lived and became ohana, famly. He even gave me the name Benroy, “Son of a Lion.” I could say he was a father to me but really he was so much more than that. Once I grew up a bit he was my father, my brother, my best friend, and the one person to tell me the truths I hate to hear. I like to think I was all that to him as well.

I had spent so many moons with Levin it felt like that was just what life was suppose to be like. I guess I kind of took it for granted. We were defending our lands from some Lizard-folk, yet again trying to…do whatever Lizard-folk think attacking will do…but this was different. It was like an all out war. So many farms and villages devastated. Master Levin and I with a number of other warriors kept fighting them back. We would get an upper hand then lose ground other places. It seemed like this war would never end. Then Master Levin got the stupid idea he should go straight for the Lizard Warlord. He succeeded but lost his life in the process. The lizard sent with his tail was proof enough of that, but the lizard-folk disbanding proved his sacrifice was not for nothing.

In my younger days I would have lost myself over this but I knew the risks of the work we did. I morned him. Hell I carried his tail around with me and sometimes felt the great sorrow of his absence when his scent would find my nose. But Master Levin taught me well. Taught me how the world works, the natural cycles of life and death. It was his time. He just passed on into the greater next phase of his life, like a larvae escaping his shell to become a beautiful moth of the forest, Master Levin is experiencing the Great Next.

I guess there isnt too much else to share. I battled some huge scorpions with a random band of adventures. We actually travelled together for years but more of a group brought together through passive symbiotic relationships rather than a pride. I think in many ways no one can fill that role like Master Levin did. And that is a good thing. My home is everywhere I am because I have become one with Aina. An I will always have ohana because Master Levin travels with me. Before he left me he gave me a special orb covered in runes. It probably is nothing but it reminds me everyday of my Master, and reminds me to keep seeking to learn more, to grow, to push myself, even if there are no answers, its about growing in the cycle that Mother Kyanna has placed us.

Oh, well I guess it is worth mentioning I joined another group temporarily to stop some cult members who were trying to raise some demon from the far realms or something. Honestly I just knew their necrotic vile magics were destroying the natural order of things and needed to be stopped. It was probably the most powerful enemies I have ever faced. I was his hard by some magics that completely knocked me unconscious. I was revived but it was close. The healer said I was on deaths door and any longer I would have gone on to see my Master. I felt more invigorated after that to increase my power and make sure I can help keep the chaos and order of Mother Kyanna in balance.

This world has torn and shattered and abused in so many different ways, but this world is my Aina.

I serve at the pleasure of Mother Kyanna to keep this Aina intact. 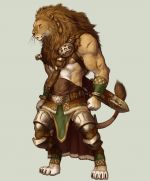