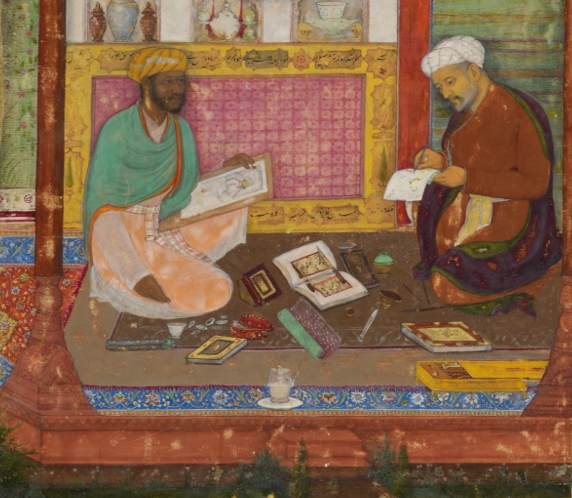 Seferdah grew up in his family's Academy, and began training as a Sage. His father also initiated him into the priesthood of Aureaon, and hoped that someday he, with his brothers and sisters, would keep the family business going.

One day like any other Seferdah was cataloging scrolls. His family business bought and sold them, and a new shipment had come in from scavengers of the desert. One scroll in particular caught his eye, as it seemed less weathered than the rest. Looking carefully at it he could see it was sealed in wax with a remarkable seal, full of tiny writing. He took a magnifying glass and began to decipher the tiny script. It was written in Primordial, and reminded him of an ancient poem he had read just a week before. Absentmindedly he began reciting the poem out loud, and to his shock the writing began to pulse and glow, melting the wax. The scroll unfurled itself and caught on fire, the smoke filling the room then coalescing into a furious whirlwind with a figure in the middle. Seferdah trembled in fear as he realized this was a djinn of old. Remembering the last words of the ancient poem, Seferdah said in Primordial, "O, Shining Swift Wind of the Desert, hear my plea and have mercy on this mortal!"

At the words the djinn stiffened and the air in the room grew very still. "My apologies for my rudeness. You invoke the compacts of old, and I must reply in kind. You have freed me from a dread servitude, and you certainly deserve a boon. You shall have the Blessing of Head, Hands, and Heart."


And the djinn moved to Seferdah then and grabbed his hands. In Seferdah's left hand the djinn bound a wind to help, and in the right a wind to harm. The djinn then bent forward and the air contained a thousand distant voices. In Seferdah's left ear the djinn whispered the secret of a Curse to thwart his enemies. In his right he whispered the secret of Prophecy. But this secret was too much for Sefardah's mind, and it escaped into his dreams, where it remains to this day.


The djinn then moved towards Seferdah's heart and a look of surprise crossed his face. "I...cannot! Your heart, it is pure!" And with a final look of consternation the djinn grew more and more misty, until nothing remained.

To help disguise his new powers, Seferdah's father pulled some strings and got him admitted to the Cloister as an Aspirant. Balthazar is not happy with the way his son's life has gone so far, but Seferdah has vowed to redouble his studies and make him proud.

Hieronymus is a celestial spirit that currently takes the form of an desert owl. He has golden eyes and his plumage tends towards coppery and silvery tones. He constantly looks like he disapproves of you.


Your familiar acts independently, but always obeys your commands. In combat, it rolls its own initiative and acts on its own turn. A familiar cannot make attacks, but can take other actions as normal. Within 100 ft. of your familiar, you can communicate with it telepathically. As an action, you can see and hear through your familiar's senses until the start of your next turn, gaining the benefits of any special senses the familiar has. During this time, you are deaf and blind with regard to your own senses. Within 100 ft. of your familiar, you can have it deliver a touch attack spell on your turn. The familiar uses its reaction to deliver the spell as you cast it. If the spell requires an attack roll, you use your attack modifier for the roll. As an action, you can temporarily dismiss your familiar. While it's dismissed, you can cause it to reappear w/in 30 ft of you as an action. If your familiar drops to 0 HP, it disappears, leaving behind no physical form. Your familiar can't reappear until you recall it by casting Find Familiar again.

Seferdah and Dregden are fellow Aspirants at the Cloister and had taken several classes together. One day as they were walking between classes they were attacked by a vampire spawn and an undead dire wolf that had escaped a nearby Azar-Haq trial. Working together, with Dregden's might and Seferdah's clerical magic and knowledge, they were able to defeat the vampire spawn. During the fight Seferdah was pinned down by the undead dire wolf, but Dregden was able to rescue him.

Since then Seferdah has had a bad case of hero worship for Dregden, following him around the Cloister and helping him whenever he can. Dregden knows that Seferdah has some clerical magic, and Seferdah knows that Dregden's blade is strangely powerful, but he doesn't know all of Dregden's secrets.

Seferdah's older brother Zekaiyel is a tower watchman in the tower closest to Bliss. He often goes there after work to have a drink and unwind. On paydays he sometimes orders other entertainments, one of his favorites being Durash. Seferdah has been to Bliss a few times to fetch Zekaiyel, and once, when he was unavoidably delayed, Zekaiyel sent Seferdah to Bliss to reserve his reservation with Durash. They spent almost an hour talking at the bar. Seferdah now understands his brother's infatuation, and Durash sees a future patron that may soon be wealthy and powerful.

Seferdah has a recurring dream: On a rocky plain of fire, a staff thrusts from the earth, pulsing red. Around it are indistinct figures made of fire. Sometimes the figures grow, looming over the staff. Sometimes, the staff becomes a mighty tree with falling leaves of fire. And sometimes, in the distance, there is a shadowy figure, not on fire, with an occasional silver glint.

Unbeknownst to Seferdah, Uruthal has seen this staff before in his travels, possessed by fire giants in the smoky lands to the south.