Silverymoon is a beautiful city that stands amid the ancient trees of the Moonwoods. Home to over 26,000 humans, dwarves, gnomes, elves, half-elves, and halflings, it is often called the Gem of the North. Silverymoon's considered the North's center of learning and culture, and its close ties with the Heralds and Harpers, as well as powerful local mages (such as the Mistmaster or the mysterious Shadowcloak), only aid in its reputation as the North's major seat of knowledge. It's a happy place where many races dwell together in peace. The city's peace and civilized demeanor owes much to its kindly, diplomatic ruler, the High Lady Alustriel, a silver-haired sorceress known to be at least two hundred years old.

Silverymoon straddles the River Raurin at its bend westward toward the Evermoors. The heart of the city, including the palace and Silverymoon's oldest buildings, lies located on the northern bank. Its half-circle shape is surrounded by defensive walls that have been breached only three times in the city's history. The walls are pierced by three gates: Moorgate on the west, Hunter's Gate to the north, and Sundabar Gate at the city's eastern perimeter. A road surrounds the walls on the outside, and it connects with the three trade roads leading out the gates.

Across the Rauvin lies the newer sector of Silverymoon. This area contains many warehouses, paddocks, docks, and caravan businesses, but it also plays host to the city's pride and joy - the Vault of the Sages. In addition, a number of magic schools are in residence, and there has been talk for years of unifying them into a mages' university of sorts. The north bank links to the south by the Moonbridge, a construct of invisible magic that glows with a silver sheen in the moonlight.

Silverymoon is, outside of Waterdeep, one of the few bright spots of civilization and learning in the North. Its fortunes are dictated less by trade and war and more by knowledge and magic. Waterdeep alone boasts a greater population of settled wizards on the Savage Frontier, but many Silverymoon rulers, including Alustriel, have always made the preservation of knowledge and the magical arts a priority for the city. Many say that Silverymoon's values toward music, education, and the arts "echo that of lost Myth Drannor," though they are even more open to those of all races than the elves of Cormanthor ever were.

Silverymoon became a city in Uktar 637 DR, when a stone wall was built around it for the first time and the first ruler of Silverymoon, High Mage Ecamane Truesilver, was elected. Prior to that it was mainly a village of wooden buildings named Silver Village. It was built at a location considered sacred to the patron deity of rangers, Mielikki, and the unicorn goddess Lurue. Since that time the settlers sought to work with nature rather than against it, a decision that is said to have compelled the aforementioned deities to bless the site.

Ecamane Truesilver was instrumental in setting the foundation to the city's enduring (and totally justified) fame of a center of lore and knowledge throughout the North (often called "Myth Drannor of the North", as it is an echo of the legendary capital of the Elven Court). Truesilver founded a library and subsequent rulers of the city pursued artistic endeavors and further consolidated Silverymoon as a place where art, culture, lore, and magic are highly valued before his death in 712 DR. Ecamane was followed by his nephew, Aglanthol the Red as the second High Mage of Silverymoon. When Myth Drannor fell in 714 DR, some prominent scholars found shelter in the city, but they were followed by the demons that destroyed their home. The then reigning High Mage, Aglanthol, perished in the ensuing fight in 719 DR. His successor, Ederan Nharimlur, by contrast, reigned for many years in peace. It was in his reign that the city almost doubled in size.

Upon Ederan's death in 784 DR, his daughter Amaara Nharimlur became the High Mage of Silverymoon. In 815 DR, Elué Dualen arrived in the city and befriended Amaara and her sister Lynx. In 821 DR, Elué and Lynx established the Lady's College, the first open school for mages in Silverymoon to take students, not apprentices, and as payment for tutelage required an equal amount of time of service in defense of the city. In 843 DR Elué and other wizards created the Moonbridge, the city's most famous landmark along with the wards of Silverymoon. Eventually Elué became High Mage in 857 DR after Amaara left for Evermeet. Elué left the post in 876 DR with Lynx.

The succession of High Mages was disrupted in 876 DR, when the warlord Lashtor, then commander of the city's army, took the city by force, destroying many important buildings and killing many wizards in the process. He could not remain in power for more than a year, however, as he was deposed by Tanalanthara Mytersaal, a mage also known as Lady Wolf. Lady Wolf sacrificed herself in 882 DR while fending off a horde of orcs.

The next High Mage was chosen by the people of Silverymoon to be Tanisell the Cloaked, who during his reign strengthened the wards of the city and constructed the Vault of the Sages. In 920 DR the Keeper of the Vault of Sages, Threskaal, succeeded Tanisell. Threskaal reigned for over a hundred years in peace until his death during 1050 DR. High Mage Orjalun was the next to take up the mantle of rulership and oversaw a reign that included the emergence of many famed mages such as Ahghairon and Bowgentle. However another disaster that befell Silverymoon was a plague in the year 1150 DR. nearly half the city's inhabitants perished because of it. In 1230 DR, Orjalun appointed the next High Mage as Sepur. After two years Sepur disappred from the city, resulting in an elected mayor ruling for the next three years.

The first time that an enemy broke through the walls inside the city, though, was in 1235 DR, when the commander of the army, Khallos Shieldsunder, forcibly gained control of the city while under siege by an orc horde. The orcs, as has been stated, managed to enter the city, but the combined forces of the elves and the Harpers led by Alustriel Silverhand and her sister Storm Silverhand successfully repelled the attack.

Alustriel subsequently became the city's only ruler to have been unanimously chosen by the people, and the only one to have reigned for so long. Alustriel's reign has been a blessing to the people of Silverymoon. 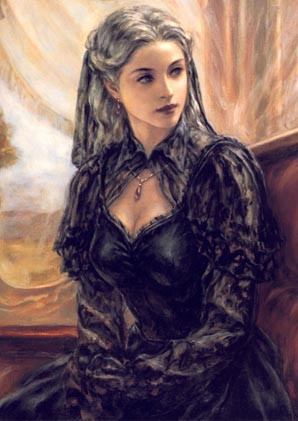 Silverymoon has a long history of being ruled by mages, broken only by a short stint in which warlords held power in the Gem of the North. The current High Mage, Alustriel Silverhand, has been High Mage of Silverymoon for more than a century. She is the first of the High Mages to be made such by unanimous proclamation of the people of the city, and is highly regarded as not just a canny politician, but a tireless patron of the arts and magic, and defender of her people.

Though she does wield supreme executive power granted to her by her people, she never uses it save in the direst of emergencies. Despite this, the city runs very smoothly. Legal disputes are delegated over in the morning with spare time left for private appointments with those who request them. In the evening, she declares any new laws or decrees, meets with foreign delegations and oversees policy debates. If these debates go on for too long, she asks that the arguments be submitted to her in written form and then these are copied and distributed freely to the citizenry. The public themselves then argue about the matter and their written opinions are collected the next day. Within the week, taking the voice of her people and her own experience and wisdom as her guide, Alustriel cobbles together the final policy. 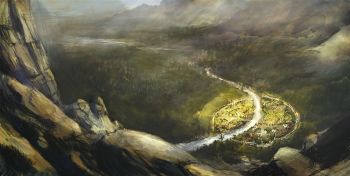 The first line of defense for the mighty city of Silverymoon is her wall. Massive constructs of Silverymoon’s ubiquitous silvery-white stone, the walls of Silverymoon have only been breached three times in the history of the city. Four gates pierce the walls: the Hunter’s Gate in the north, the eastern Sundabar Gate, the New Gate in the south and the Moorgate in the west.

Local legends have it that these gates are protected by a variety of wards; some claim that they detect and identify sources of evil and malice, while others whisper that these spells limit the magics that can be worked near them. What is certainly known is that the areas around these gates radiate strong abjurative auras and those who examine them too closely bring themselves under the scrutiny of the Spellguard.

The fair city of Silverymoon spans the River Rauvin and the main thoroughfare between the Old and New Cities is also one of its best defenses. The Moonbridge, as it is known, is a span of invisible, magical force that arches above the Rauvin. In times of need the middle of the bridge can be dispelled, preventing invaders from crossing or enabling ships with tall masts to pass easily beneath. 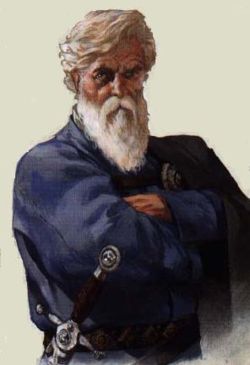 The defenses of Silverymoon do not end at her gates, however. The Knights in Silver are an order of knights - all clad in gleaming silver, with the badge of Silverymoon upon their shields - who act as the first defense of the city. They lead either units of Moon Garrison (Silverymoon's military dedicated to the defense of the city from external threats) or groups of Silverwatch (Silverymoon's city guard) against all threats. The most veteran members of the Knights are often inducted into the High Guard, who provide the security for the High Palace of Alustriel.

Captain Taern Hornblade, a potent invoker, founded the Spellguard decades ago, and still leads it to this day. Though they began as (and continue to be) Alustriel's magical bodyguard, their wardening duties have extended over time to cover all of Silverymoon as a whole, giving the city a potent body of wizard-watchmen ready and willing to lend their spells to the defense of the Gem of the North.

Though her forces are dedicated to defending Silverymoon first and foremost, there are patrols around the city, within three days ride, called "land-rides." Made up of a dozen or so Knights in Silver, accompanied by two Spellguard battle-mages and a volunteer cleric (usually of Helm, Lathander or Mystra), these patrols venture forth to defend the small homesteads, settlements, and caravan roads within the shadow of Silverymoon.

Ultimately, though, the defenses of Silverymoon lie in her inhabitants. In addition to Silverymoon’s potent standing army, the city is home to many powerful individuals, any of whom bear powerful magic, great strength or prodigious skill. All stand ready to bear all of that and more – down even perhaps to their lives – in defense of their precious Gem of the North. 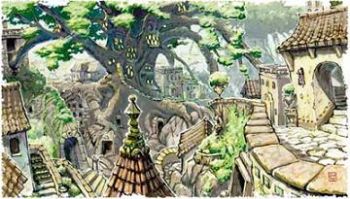 Silverymoon is divided into two quarters by the River Rauvin: the Old City (to the north of the river), and the New City (to its south), with only the magical and wondrous Moonbridge spanning the waterway.

Silvermoon mints its own electrum coin, the moon. It is valued at 2gp and accepted throughout most of the North (though some merchants in Waterdeep balk at them).