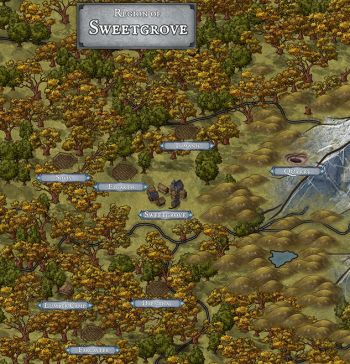 The Sweetgrove Settlement charter provides for the founding of a new settlement on the third continent of Freehold. The land allocated is about forty miles east-to-west, and the same size north-to-south.

The purchaser of the charter, Tulmar Erinth has chosen "headsman" for the title of leadership. Though the charter provided for what could have been a minor noble title of some kind, Erinth has instead chosen to secure the title of headsman for twenty years while Sweetgrove is being established, and then it will be turned over to a community vote for the next headsman. Erinth will still own a variety of lands, but the leadership of the community will be set on the community's shoulders.

The Sweetgrove Council is the main form of government for the Sweetgrove charter. It is directed by a headsman, and made up of a number of seats allocated to investors and community leaders.

There are a number of groups or individuals who have invested heavily in specific resource-gathering rights of the rich Sweetgrove area, or who have otherwise contributed to the establishment of the settlement.

Temple of the Green

The Bralian Temple of the Celestial Wheel – which Tulmar Erinth has long been a faithful adherent to – is among the headsman's staunchest supporters. They have contributed significant coin to the Sweetgrove venture, and received two things for it: the prioritization of their temple being built, and a seat on the Sweetgrove Council. The temple is also constructing an orphanage and attached school for all of Sweetgrove's littles. They are represented in Council by Oakmaster Ithmandar Sildinn, the community priest, although the word of Reverend Sister Eltara Rosedawn, the halfling teacher and caretaker of the orphans, is given much weight.

A partnership between the dwarven Clan Dunmarg and the gnomish Findlebright family has invested in quarry and mining rights in the foothills of eastern Sweetgrove. Though they do not hold exclusive right to those resources, Tulmar has granted them exclusivity for twenty years in that endeavor. Imbella Dunmarg is the matriarch of the dwarven clan, and Rundle and Thimbelle Findlebright head up the gnomish contingent of the venture. The venture holds a single seat in the Sweetgrove Council, and Imbella and Thimbelle seem to switch out attendance of meetings.

A small investment by the Bralian House Kullek, the timber camp near Sweetgrove is intended to serve Sweetgrove's needs first, but then will be turned toward the lumber trade of House Kullek. Venesta Kullek is a minor cousin of the house who has been assigned to make sure this investment goes well, and to have the chance to make her fortune and reputation while doing so.

A trio of investor brothers who have invested in several of the local farms and businesses, the Martileks have come to Sweetgrove with their families for a fresh start. On Bral, they were gamblers, rakes, and possibly involved with one or more of the Underbarons, but the pressure and feuds of such a lifestyle have basically driven them from the Rock to a comfortable rural retirement. The eldest brother, Savin Martilek, not only occupies a council seat, but also is the proprietor for the Lockstar Inn. His brother Elvos, is building a tavern across the street from the Lockstar. The youngest, Vander, is single and on hand to assist his older brothers.

A number of families have been granted farmsteads as part of the charter. Each of these farmsteads includes rights not just to a person holding for that family, but also the leasing rights to other farming plots near them, making each of the farmholds a small hamlet of itself (eventually).

The farmstead closest to Sweetgrove's center, the Elgarth holding is being built at the same time, in order to get started on a source of local agriculture. The pious and agrarian Elgarth family are humans and half-elves, and they are focused on raising field grains, vine vegetables, and the husbandry of sheep and pigs. Patriarch Dolunn Elgarth sits on the Sweetgrove Council, although he tends to defer to Oakmaster Ithmandar more often than not.

The Sovis family are half-orcish, and were able to afford this charter solely because one of the heads of household used to serve as a Magistrate's Watch on Bral. Once their steading is built, they are planning apple and pear orchards, berry patches, field grains, and the husbandry of sheep and cattle. Lucrinda Sovis sits on the Sweetgrove Council.

The wealthy Tumanil family of Bral have purchased this holding with the intention of building a fine hunting lodge on it and setting up lease-farms on the steading proper. Their steward Theldon Reed technically has a seat on the Council, but he has never shown up to a council gathering.

A cooperative of elven and half-elven friends and lovers, Daenthal (which is a name for the group, not a family name) intends to focus on field grains, root vegetables, and berry patches, as well as the artistic output of the various steadholders. None of Daenthal are even on Freehold yet, though they are allocated a council seat.

The half-elven wizard Fargaster has selected a hold fairly distant from his neighbors, and construction on his stone tower has already begun. He has stated an intention to focus primarily on lease-holding the stead's farms, although he intends to set up a horse ranch for himself. He has a seat on the Council, but has allocated his vote to the headsman until such time as he reverses that decision. Fargaster has a tressym familiar named Manxley.