Tomtom Tommyknock is insatiably curious - to the point of compulsion. His inquisitive nature drives him to ask question after question, to turn down every alley or corridor - often to his own determent or the determent of his allies. Because he is always focused on or trying to discover new details or mysteries, he is often unobservant of his surroundings or the circumstances of his environment. Strangely, however, despite his unobservant nature - he is never caught unaware and seemingly avoids even the most deadly of situations. Further, though he often possess a nearly supernatural sense of direction - he commonly finds himself lost or separated from his party. This, however, simply adds to his sense of adventure - and he deeply believes that life is an adventure that should be lived to the fullest.

Growing up alone and poor has left him deeply distrustful of those with excessive wealth (though this is completely subjective). While he may 'relieve' them of these excessiveness - he will never keep it for himself if there are others of greater need around (especially orphaned children). He doesn't see this as "theft" but instead as an act of Charity on behalf of his mark - even if they are unaware of their altruistic act.

He is good natured - almost excessively positive - and nearly impervious to fear (usually because he is simply unaware of how dangerous the situation actually is).

Tomtom now constantly wears a dark crimson, white fur lined cloak over his studded armor, along with dark hunting leathers suited for winter hunting. His hair has grown out, including long mutton-chops giving him a much older and matured look - though his eyes still sparkle with mischievousness and innocent, jovial nature. Children seem to naturally gravitate to him.

Zombie, and Troll, and Dire Frog, and Manticore and Zombie-Giant, and Griffon, and Winter/Ice Goddess, and Hasted-Enlarged Monk, and Remorhaz, and Frost Giant, and Spirit Dragon, and Mechanical Spider, and "Deathkiss" Nightmare Beholder, and Grey Render, and Death Angel, and Radiant Spirit, and Horned Devil, and Bone Naga, Surfing, Tumbletastic, Eye-Stabbing, Ball-of-Fun.

Company (Companions, Corporation?) of the Chalice 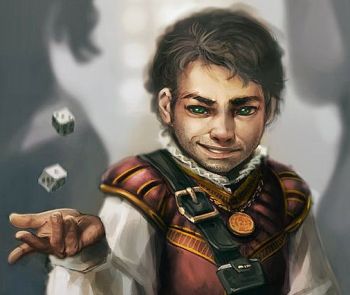