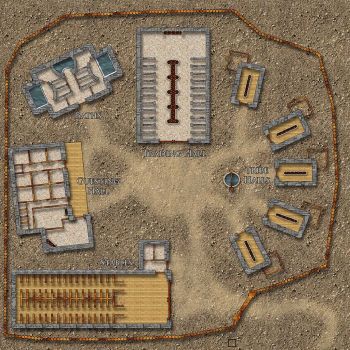 The massive trading hall of Tuskenhall is a wide structure, some two stories in height. Its foundation and lower floor is mostly fieldstone, but its upper reaches are wood. Crossed over the main entrance are a pair of massive mammoths's tusks, each of them some six feet in length. 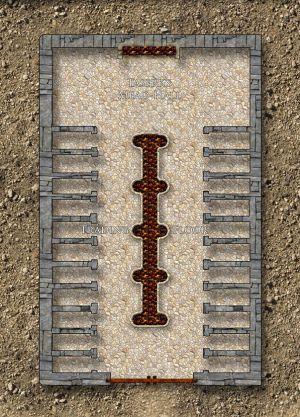 Against each wall are a number of stalls. These are assigned on a first-come, first-serve basis each day. These stalls are the designated trading space, and usually filled with Icewalkers looking to trade or sell their own goods, or outlanders with goods they want to trade or sell to the Icewalkers.

In the center of the structure are several long, narrow stone-lined firepits. It is available for anyone to use in cooking food, if they like, whether for personal consumption or for sale. Small circular pits are built into the edges of these firepits, where coals are scraped into for such culinary endeavors. Between the fire pits and the trading stalls are the walk-way space where those browsing the goods available.

At the far end of the hall, opposite the entrance, is Taserk's mead-hall, with its own massive hearth, and trestle tables and benches for visitors to sit and order the food and drink Taserk's operation offer. There are inevitably a handful of folk here, resting from or preparing for travel, or perhaps talking over the terms of a trade agreement.

Taserk and his family live upstairs, reached by the stairs from the mead-hall.

There are a number of other structures on the small hilltop where Tuskenhall stands, all of them also made of fieldstone. 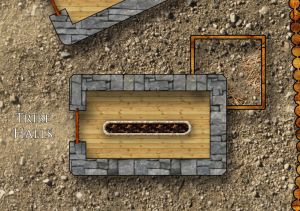 As a gesture of his good will and desire to bring prosperity to all Icewalker folk, Taserk Sharptine has seen to the construction of five of these "tribe halls," one for each of the major four clans that trade here, as well as a fifth for use for overflow or in the case of a much-further off tribe visiting them for trade (which has only happened a time or two).

These halls are simple, with long firepits down their center, and sleeping platforms along the walls, large enough for a traveling Icewalker to make a pallet and store his goods around him. The master of Tuskenhall has supplied a sturdy chest bolted to the wall for each such sleeping platform, and whoever is given that platform is also given the key to it. Each hall has a dozen such platforms.

At any given time, only about half of these halls are in use. 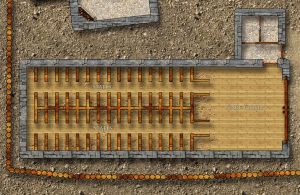 The stables at Tuskenhall are warm and offer good fodder and clean food. They can also hold over a score of animals, and even have interior space to store smaller carts and the like. 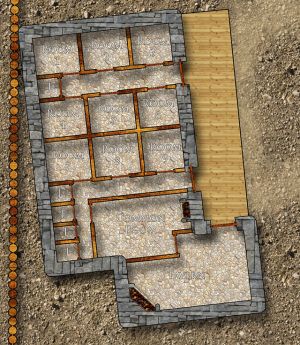 The guesting house is a moderate-sized one story fieldstone structure. It has several smaller rooms - each with a bed, table, and chest for a single occupant - and a larger common room with cots that can sleep about two dozen or so folk. It has a small tavern space for drink and food for its patrons alone, which is a much quieter affair than the mead-hall in Tuskenhall proper. 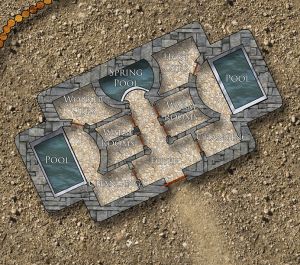 This fieldstone building is constructed over a hot springs. Though it smells strongly of sulfur, it is deeply luxurious to submerge in after travel or a long day of trading. It features three baths - two that can easily accommodate twenty people in the various seats and nooks worked into the natural stone structure, and another one that can fit up to eight people, if they are cozy, which is situated over the spring proper.

The baths also have several heated rooms for massages and assignations with any of the body-servants that patrons may employ for an hour or so. These body servants and the twins who manage the bathhouse live in the small apartments in the back of the baths structure.