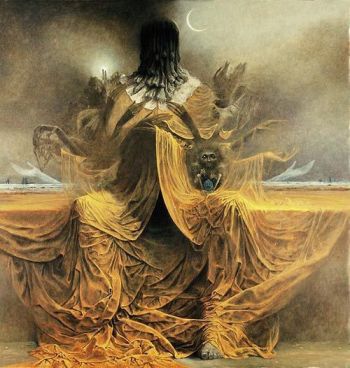 Lord of the Yellow Sign, Rune of Madness
The entity known as the Unspeakable One has been worshipped by mad cults since the days of Lemuria and Atlantis. Its true name is known only to a few, for it is said to speak it invites its attention and, therefore, madness. The Unspeakable One is a force of primordial chaos, and its followers want nothing more than to summon it into the world to bring the “gift” of divine madness to all. A few with a slightly stronger grip on their sanity seek to use the Unspeakable One’s power for their own purposes, but they constantly risk falling deeper into a psychic abyss from which there is no return.

This spell is a rising and falling chant in an alien tongue, the very sound of which is maddening. Continuing the chant gives the spell its cumulative effect.

This spell calls up a preternatural creature from the Unspeakable One’s realm to serve the sorcerer.

This is the most infamous rite of the Unspeakable One, a sigil able to induce madness in those who see it.