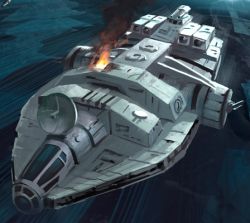 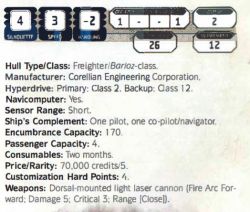 One of the most popular freighters produced in the decades prior to the Clone Wars. the Bar/oz-class is a basic. no-frills cargo transport that still secs use in many parLs of the galaxy. Designated as a medium freighter while still in production. the Barloz-class was the predecessor of Corellian Engineering Corporation's YT series light freighters, introducing many of the features that would make the YTseries so successful. Though not particularly maneuverable and poorly armed, the Barloz­ class possesses decent cargo capacity, reliable ion drives, and a durable hull. Pilots have found it relatively customizable, which has sustained the venerable freighter's continued use by smugglers and free traders operating throughout the Mid Rim and Outer Rim Territories. These features also make it appealing to anyone who wants to stay under the radar while traveling on the fringes of society.

Rebel Use: This ship's ubiquity and the fact that most criminals eschew it for something flashier, faster, or more dangerous gives the vessel a perfect profile for insurgent actions looking to remain out of the eyes of officials. 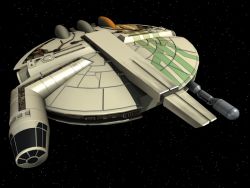 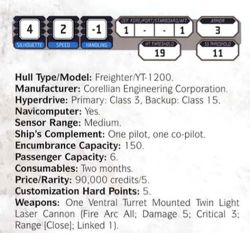 Built to replace Corellian Engineering Corporation's revolutionary YT-1000 modular light freighter, the YT-1200 was supposed to redefine the light freighter concept. It featured the iconic saucer-shaped hull of its predecessor, along with the trademark CEC modular design features and reliable ship systems. Improvements on the older ship's design included an offset, side-mounted cockpit, more power- ful engines, better sensors, and a more efficient cargo handling system. Unfortunately, as is the case with many sophomore efforts, the YT-1200 fell well short of its predecessor in a number of important areas.

In a clear-cut case of trying too hard, CEC designers set out not to build a well-built freighter, but to build "the next YT-1000." They looked at market analysis and customer feedback, identified what they believed made the YT-1000 so successful, and designed the new ship to simply do what the YT-1000 did in the hopes of another wild success. Initial sales were very good, but as customers became more familiar with these new ships, complaints came pouring in. The YT-1200 was seen as not enough of its own ship to be really distinguished from the YT-1000.

Customers also reported theengines weren't powerful enough, the internal systems were buggy, and the stock power generators were prone to power surges and short cir- cuits. Sales fell off sharply, and CEC eventually canceled production of the YT-1200 and retrofitted the remaining stock with better systems, releasing those refit ships as the YT-1210 and the YT-1250. Despite their dismal commercial failure and lingering bad reputations, the YT-1200 series freighters can still be found on the used ship market.

Rebel Use: Because they are seen as sub-par, some Rebel cells have refitted their electronics, turning them into perfectly usable vessels for the various tasks required by their missions. 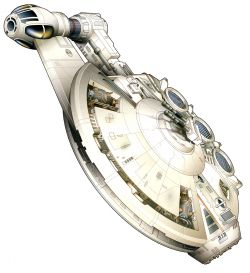 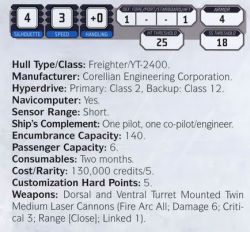 Corellian Engineering's YT 2400-class light freighters are an update of the aging, reliable YT-1300 class. Using the lessons learned over the decades since the YT-1300's initial launch, CEC's engineers packed as much power and as many sophisticated flight and cargo handling systems into the YT-2400 as it could possibly hold. The YT-2400 has a saucer-shaped hull with a central circular core surrounded by cargo and passenger modules. Like all YT series freighters, it has a starboard-mounted cockpit connected by the main hull by a pair of reinforced pylons. The cockpit section contains its own access hatch and crew escape pod. Overall, these ships are slightly smaller than the YT-1300, thus they make better, more efficient use of the space available to them. The bow of the shiop and forward cockpit pylon contain the ship's main cargo hold and the crew quarters. Opposite the cockpit are the common galley and refresher, and abaft the central core are a number of private cabines, the engineering bay, and the passenger escape pod.

While officially built as a civilian freighter to be used for legitimate business, Corellian Engineering's marketing and development departments are fully aware that the majority of their customers are, perhaps, on the far side of the law. The ship is touted as being "Double Plated," which is essentially advertising-speak for military grade armor. YT-2400s also feature heavy shields, room for larger reactors and ion drives, and a number of dedicated weapon hard points that come out of the shipyard unused.

Rebel Use: Easily the most expensive of the ships in standard use by Rebel cells, the YT-2400s that see such service are often purchased at mark-downs due to damage of some kind. As such, most of these ships in use by Rebels bear some kind of flaw or damage that has to be compensated for by its crew. 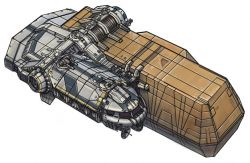 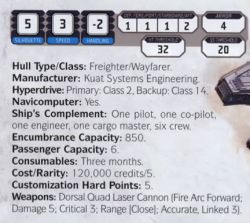 Kuat Systems Engineering's Wayfarer-class is a relatively new entry to the medium transport market. Designed to accomodate unique modular shipping containers built specifically for the ship, the Wayfarer was designed to revolutionize galactic shipping. In reality these ships had a rocky development process. By the time the first Wayfarers came off the stocks for their shakedown cruises, the project was terribly over budget and behind schedule. Only one of the many types of shipping container was actually built, the bulk cargo container. This, combined with the fact that the Wayfarer's cargo containers are bespoke and the ship can't carry standard shipping containers, limited its usefulness. Although they never revolutionized shipping, they have found a niche among wealthy shipping conglomerates in the developed parts of the galaxy where their owners have custom containers fabricated. The vessel itself has a strange, ungainly design, with the modular cargo container hung from an armature that extends from the port side of the ship's hull. The ship is slightly unbalanced and requires a talented and even-handed pilot to make the most of it.

Rebel Usage: Interestingly, the Alliance has put the modular nature of this ship to great use. Because customs inspectors and other types of investigators tend to be unfamiliar with the ship's modular systems, they find it easier to conceal panels and even entire chunks of the ship's shipping module in design. Add to this the fact that the Alliance has a small crew of engineers who like the ship's design and have put some effort into modules of use to the Alliance - including medical modules, prison modules, smuggling modules, and even troop transport modules - this sees a curious amount of use by rebel cells.