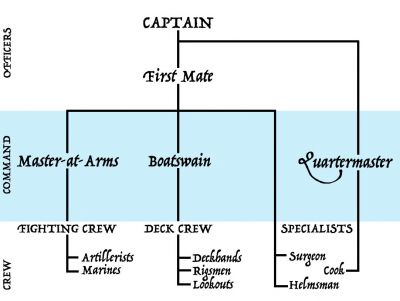 Key Abilities: Intelligence (Vehicles - Water), Charisma (Intimidation, Persuasion)
The captain commands the vessel. They are the final authority aboard that vessel, even acting as judge and jury if necessary. But this means that the buck stops with the captain as well – failure or tragedy is usually heaped on the captain's head at day's end. The captain's job is to ensure the vessel accomplishes its aims, start to finish and top to bottom, and a good captain does so by finding and appointing talented folk to officer positions and managing them accordingly.

Key Abilities: Charisma (Intimidation, Persuasion)
This specialist keeps the crew's morale high by providing supervision, encouragement. and discipline. Though the first mate holds command when the captain isn't on deck, the first mate's primary role is to interface between the captain and the rest of the crew. A good first mate usually interacts with the crew based on the captain's demeanor: an aloof or distant captain is best served by a friendly, one-of-the-lads sort of first mate, while a friendlier or inspiring captain usually needs a stern hard-ass of a first mate.

Key Abilities: Strength (Athletics; Carpenter's Tools)
The bosun (or boatswain) provides technical advice to the captain and crew and leads repair and maintenance efforts. Generally speaking, the bosun sits between the crew and the command, with the bosun typically in charge of hiring and firing crew and doling out shift assignments. When neither captain nor first mate are on deck, a bosun usually is in charge, but this isn't an expectation of command, per se: a bosun keeps everything operating ship-shape and normal, and if anything comes up that requires a command decision, the bosun immediately fetches the captain or first mate. In port, a bosun oversees transition of cargo, as well.

Key Abilities: Wisdom (Medicine; Herbalism Kit)
The ship's surgeon tends to injuries, keeps illnesses from spreading throughout the ship, and oversees sanitation. The surgeon's relationship with the crew can vary – sometimes they're the meddlesome wag who insists things aren't being cleaned well or often enough, other times they're the champion insisting to the command that you be given a day or two to recover from an illness, and at yet other times, they're the terror deciding whether or not you lose that limb! A surgeon's direct commander is the first mate, and they are at equal status with the bosun.

Key Abilities: Constitution, Intelligence (Brewer's Supplies, Cook's Utensils)
A ship's cook works with the limited ingredients aboard a ship to make meals. A skilled cook keeps the crew's morale in top shape, while a poor one drags down the entire crew's performance. The cook's immediate superior is the quartermaster, and is frequently given charge over a few of the crew who are a deft hand in the kitchen (or who are so useless in other tasks or in need of punishment that they end up dumped in the galley).

Key Abilities: Intelligence (Vehicle - Space), Wisdom (Perception)
Though they're often referred to as the ship's spelljammers, the proper term for them is "helmsman" – a spelljammer is a ship, after all. The helmsman is the magician attuned to the spelljamming helm of a vessel, providing it motive force. The helmsman takes orders from the officers.

The ship's roles are generally learned through a sort of apprenticeship (although they're usually not called that, because an apprenticeship usually infers not just youth but also free labor). Those who serve in this function, learning the ropes of one of the ship's major roles, is referred to as a "mate." (This is why the first mate is called such, as they are effectively learning to be captains.) Being chosen as a shipboard mate doesn't come with any additional authority or pay, but the training is usually a promise of better in the future, so they are coveted positions among the crew. It should be noted that being taken on as a mate does not free up a crewman from their normal crew responsibilities – they typically take a shift on deck, and then do other tasks afterwards.

Any given shift usually has a small crew of sailors who work to keep things running smoothly. Generally, deck crew are in one of three assignments. The deck crew typically look to the bosun or bosun's mate (whoever is on-shift) for their direct command.

It is usually only military vessels with a dedicated fighting crew – even pirate vessels can't afford the luxury of fighting sorts who don't do anything else day-to-day. The fighting crew of a vessel is under the command of its master-at-arms.