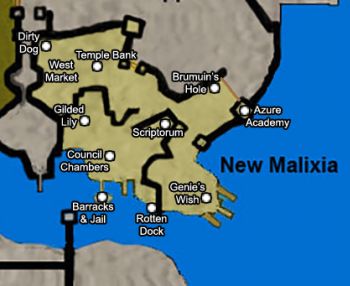 Wealthy, Aristocratic Lifestyle
Proprietor: Joyce and her husband Nathan, their daughter Jemma, her husband Philip (and their toddler, Daniel). They also employ a satyr named Hansel as their cook and renown baker.

Jace Fravurn, Grocer
This shop, located in the residential district, is much more of a medieval grocer than a modern one. He sells items necessary for everyday life, only a little of which is food. His prices are fair, but he is a tightwad when it comes to bargaining.
Tosh the Smith (satyr)
Tosh is an expert craftsman of armor and weapons and member of the Coalition of Tradesfolk. However, because his work is quite good and takes time to do, he seldom has anything immediately available, but any weapon or piece of armor can be ordered. Tosh will send a Runner to their lodgings with a message when the work is done.
Karla and the Runners Guild
Karla Swiftstriker is a gnome from Striker and very distant relative of the Victoria royals. She is the head of the Runners Guild of messengers and parcel delivery service in Malixia City.
Harry the Smith
Harry has a wide variety of weapons and armor available, including leather armors.
These come in all shapes and sizes. Thus, any weapon or piece of armor can be obtained from him. However, his craftsmanship is nowhere near that of Tosh.
Fred the Farrier
Fred is the stabler and chief farrier of the settlement, although he doesn't get a lot of business. Characters can buy livestock (especially horses) and tack here.
Jenna of Nezorah
This shop is very much like that of the Grocer. It has the same assortment of goods and the prices are generally cheaper. However, Jenna not only sells items, she buys them, with no questions asked… hence her low prices.

A section of the Candle District given over to market stalls, carts and a few storefronts. Here you can find an ever-changing group of merchants and goods, providing a variety of options for items you might wish to purchase. Of course, honesty and quality are two things that are occasionally lacking here. There are also a fair number of pick-pockets to relieve the overburdened shopper of a little excess weight.
Stalls and shops in the market include:

The Barracks
A small island reachable by bridge with a few smaller docks off the island. This was originally a collection of warehouses and office that has been claimed and converted to barracks and jail.

The Jail
One place the character should hope never to see is the inside of the jail, which is located on the island with the barracks.

Nakaltian Scriptorum
Formerly an opulent manor house, the Scriptorum was ceded to the dwarven delegation from Nakaltia, who have since done significant work in refurbishing parts of it (notably the ground and first floors). Because they are largely scholars, scriveners, and a variety of useful crafts-dwarves, much of the space now operates as a library, scriptorum, and workshops.

The Azure Tower
A guard tower that the wizards from the Azure Academy have claimed as their base of operations (they even used their magic to make it blue). They are here to study, ward and hopefully seal the breach left in the wake of the Folly.

The Temple (and Bank) of Waukeen

In the council hall can usually be found the nine members of the council. They are:

Chancellor Ramsay Ganderley III
From a long line of wealthy nobility and traders in Estland who trace their family line back to the ancient days of the great city of Kovannah. His family had fought in the Moonsinger War to retake the city, nay - the known world from the clenched fist of Saren Moonsinger who had conquered all of Manix and ruled from his island palace in the bay. He is proud of his heritage and their estates and their money. He is using that money to help retake Malixia from the monsters and drag it back into the light of human civilization. He is notoriously racist, believing in human supremacy over other races, and that non-human-like races are barely anything more than monsters that valiant knights slay in stories.

Ramsay owns the soldiers, practically controls and brought the Guilds here and his finances are funding most of the efforts of the war and within five minutes of observation, a blind and deaf observer could tell that the rest of the council clearly loathes him.

Alva
A primly dressed hoven woman who always seems to be either annoyed or in deep thought about something, with an affection for fans, her brother is a guard captain named Rogan. She is often very concerned about funds and generally acts as the bursar and keeper of the treasury. She hails from Dulnai in Daltes where she had been the majordomo of House Timaryn.
James Silver
A handsome threxen who is all smiles and nice words, everything he says sounds like it was polished and rehearsed. He claims to be the son of an Omens pirate that fell in love with a paladin of the Dawn and Dusk, so moved by her, he gave up his nefarious ways and never looked back, becoming an honest caravan teamster. He hails from Gold Coin in the Karabur Protectorate.
Richard Embermace
A threxen Lord from an ancient Malixian noble house, his family has estates and influence in Estland and Talaria. As the seventh son with no appealing prospects, the idea of reclaiming a piece of Malixia in the family name drew him here. He is an intelligent, tactical thinker with a good knowledge of governments and politics.
Marisa Al-Nezul
An asa (elf), blue dragon blooded sorceress (and it shows) from Zilconta and a proud Scion of Novak. She is sly and cunning and a patriot that is absolutely dedicated to the retaking of Malixia City with a strong interest in solidifying the nation. She strongly believes in the dwarven throne as the sovereign ruler of the land. She is skeptical of outsiders without roots in the region and suspicious of their motivations. She dislikes the Rose Magi and resents their presence, as Malixia has not agreed to join the Alliance (which she is not keen on either). She has a little blue pseudodragon as a familiar named Sparky.
X'kera /za-KI-ra/
A kenku ranger, daughter of a tribal chief and priestess of the Blackwood goddess, Mielikki. She envisions Malixia as the gem of the north, as a beacon of hope for peace between the peoples of Neun Katha, Malixia, Estland and Noth. She had always been inspired by the tales of the Champions of Ravenholt and wants the same sort of story for the north as had happened there. She very actively wishes to be a part of the Dygannia Alliance and has welcomed the Rose Magi with open arms. because of this stance, she is often in direct opposition with Marisa.
Nurana Karros
A N'ala tolar (dwarf) warrior who used to be a town guard back home. She is always serious. Everything is serious. There is no time for frivolity - the city will not reclaim itself.
Gurn Yathor
A tolar (dwarf) fisherman and shipbuilder and sailor from Kacey and a member of the Coalition of Tradesfolk. He is cheerful and honest and loves good ale and good food. Gurn's wife died years ago. He lost his son in the fight to retake the Candle District when their ships were set aflame.
Shane Marakata
A half-dwarven hoven from Ma-Kare, member of the Coalition of Tradesfolk and owner of several ships and crews that supply the city. He is said to be the rightful heir to the dwarven throne in Malixia but claims no interest in it - much to the relief of the dwarves who don't want him, do not recognize his claim, and do not appreciate his presence anywhere near the throne.

The two Rose Magi advisors are usually somewhere in the vicinity as well:

Aleah
A generally amiable, blind woman, always wearing decorative wraps over her eyes and long elaborately tailored robes.
Bloosh
A guktan Magi who tends to be quiet and thoughtful, always weighing options to find the superior path. He is a known pacifist.