Mysterium Caucus • London, Great Britain
London's Mysterium caucus is one of the youngest in Europe, having replaced the original Scriveners of Londinium, a caucus whose origins stretched back to the founding of some of the British Isle's original monasteries in the Dark Ages. Fierce politics raged within the old caucus in 1750s London, leading to a splintering of the caucus. Within thirty years, the Hans Sloane Foundation was the only remaining Mysterium caucus, and inherited the majority of the old Scriveners' archives.

Though they are close allies with the House of Elder Writings in Cambridge, the Hans Sloane Foundation are considered lickspittles too eager to adhere to consilium doctrines and not enough to Mysterium precepts by the caucuses of Wales, Exeter, and Canterbury. The Hans Sloane Foundation meets their disapproval with a half-shrug at best, though this does put some of the finest mystagogues of the British Isle in frequent competition with one another.

In London, the Foundation is happy to entertain requests by Consilium members for assistance in acquiring magical lore. Those outside the consilium must frequently foster friendships with Foundation members in order to get access to the incredible occult wealth of the London Athenaeum. Those outside London happy to bring criticisms to the Foundation's doors point out that a great deal of that occult wealth rightfully belongs to the Awakened of the nations from which the Foundation absconded them, riding the coat-tails of the British Museum's tendency to help itself to cultural artifacts of nations colonized by the British Empire.

The athenaeum of the London caucus is housed in the British Museum. The vast place has many back galleries and storage spaces tucked away from public access, and the Mysterium makes use of them quite well. Indeed, it is believed that the most secure vaults of the Mysterium's lorehouse reside in pocket dimensions attached to the museum, and created in such a way that they seem to be ordinary (if secure) parts of the mortal building, but are anything but.

The outer entries to the museum are sigiled with the Atlantean symbol used for athenaea the world over, and there are Sleepwalkers and junior Mysterium positioned in places to note the entry of Awakened visitors to the museum. If they are accompanied by Sleepers, they are largely ignored during their time here, the assumption being that they are not here in a magical capacity. Those who come alone or in the company of other mages, need only roam around a short time before they will be approached by one of the Mysterium here, who verify their identity and ask what they desire help with.

Like all athanaea, the British Museum Athenaeum trades in kind: they will provide lore in exchange for lore, and those who come seeking it with none to give are either turned away (if they are unknown to the caucus) or possibly offered the opportunity to give up a future favor. Truly important or rare lore will often only be traded away in kind or with the surrendering of a soulstone by the seeking mage. 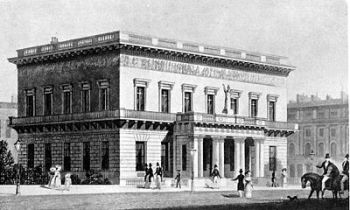 Confusing matters most is the fact that the Mysterium does not casually meet in the vaults of the British Museums - it is a threat to security to have such a population of magi wandering in and out of the space. Instead, they foster a club called The Athenaeum Club in St. James' (also called, appropriately, Clubland). All Mysterium who are members of the Hans Sloane Foundation are granted memberships.

While the club's Sleeper members believe that the upper floor consists of rooms that might be reserved for private functions (and when they inquire, the rooms are always already reserved), they are in fact given over to the Mysterium who are members. (It should be noted that Mysterium women are also given access to the upper chambers, but they must adhere to the men-only rules of the lower parts of the club and not descend into them). The upper chambers include a large lounge, several bedrooms which may be lent out to visiting guests or Mysterium members that may have some need for them, as well as the Chief Scrivener's Office, which contains a portal that can transport members directly into the vaults of the Museum.

The Mysterium finds the maintenance of the club useful for multiple reasons: in addition to seeing to a need to provide space for caucus members to gather socially without threatening the security of the true athenaeum, the club also provides the Order access to some of the finest creative and academic minds in Britain, who are often invited to speak at its gatherings. These they keep an eye out for signs of Sleepwalkers or nascent Awakening, helping to foster this when they can.

The Society of Owls

This society is an open secret among membership of the Athenaeum club, generally thought to be a secret Masons-like society made up of folk with an interest in classical mysticism and esoteric philosophy, and not enough good sense. In reality, the Society of Owls (whose members are marked with signet rings depicting the sacred owl of Athena) are all Sleepwalkers and others who are aware of the Awakened world in some capacity. They endeavor to make themselves quite useful in a variety of contexts, including being in the Upper Chambers gatherings where they see that glasses are filled and any needs of the Awakened membership are tended to. The Society performs this duty not as wait staff, but as a host might; theirs is a dignified gathering, and it would be unseemly to suggest that these enlightened men and women are mere servants to the mystagogues.

Mysterium who need the short-term assistance of a Sleepwalker helper or two are accorded the right to approach the Society and request such assistance, though the Society is under no obligation to lend that aid. They are also permitted to ask for magical favors in return for their help, although they are also known to simply offer their aid without request of payment for notable members of the caucus.

The Athenaeum Club's Upper Chambers are always open to membership. In addition, however, they also host formal gatherings.

Status in the Hans Sloane Foundation

The Foundation adheres to the traditional rankings of the Mysterium.

Titles in the Hans Sloane Foundation

The Curator is the leader of the caucus, responsible for the protection and strengthening of the Athenaeum. Curators must be Senior Daduchoi (Status •••+) or higher.

Savants are the acknowledged experts in their respective fields, prepared and willing to lend their lore to the use of the caucus as a whole. Each possesses at least two fields of study, one mundane and one dealing with Awakened lore. Savants are always Daduchoi (Status ••+) or higher.

Censors act to preserve but also secure certain dangerous artifacts and lore, until they can be unlocked for their lore or are needed. Censors are always at least Senior Neokoroi (Status •+).

Individuals responsible for acquiring lore and relics of Supernal origin that should be in Awakened or Pentacle hands. Acquisitors are always at least Senior Neokoroi (Status •+).

Cabals in the Hans Sloane Foundation