Best known for their scholarly pursuits and fine wines, Waterdhavians in the know like to say that the Melshimbers have combined those two interests to master the art of gossip and information-gathering. One of the older families in Waterdeep, few are such a fixture on the social scene as the Melshimbers. It is a simple fact that no social event can be said to truly occur in Waterdeep without at least a flurry of invitations being sent to the Melshimber Villa, and acceptance by at least one is required to accord such an event a success.

The Melshimbers never surrendered their nobility, unlike many others, though the dark times in Waterdeep hit them just as badly as others. Their old matriarch Edura was practically a slave to Open Lord Dagult Neverember, who used her information network as his personal spies, controlling her through a very addictive drug that he alone doled out to her. When she died of the caustic drug's effects, her eldest son Lord Harlond became head of house, and has sworn to never be beholden to such again.

The Melshimbers are a rollicking large family, with a great many branches scattered all over. Not all Melshimbers are recognized as House Melshimber, in fact, due to various familial enmities and falling-outs, although Laeral's Reinvestment did bring quite a few of them home to roost (so to say).

15 Nobles
The main branch today traces its lineage back to Lord Khallos Melshimber, the son of Lady Hlanta.

4 Nobles
Descended from Ciro Melshimber and his husband Naerond Aerasume, the Silverymoon Melshimbers tend to be tall and fair of hair and demeanor. Though half-elven Naerond is still alive, he has never considered himself a Melshimber. Despite this, he is basically the patriarch of the family. The Silverymoon Melshimbers seem to have inherited no small measure of wizardly skill, likely from their mother, a renowned half-elven wizardess who is part of the clergy of Lurue in Silverymoon. Only two of the family are in Waterdeep: the cousins Evannos and Ymetta.

5 Nobles
Descended from Ymayra Melshimber after she fled Waterdeep in grief, the Baldur's Gate branch was found through the efforts of Laeral and Falconfree. Her descendants inherited Ymayra's skill for wizardry. They are rarely seen in Waterdeep, focused as they are on the management of Melshimber lands around Baldur's Gate and throughout the Western Heartlands. 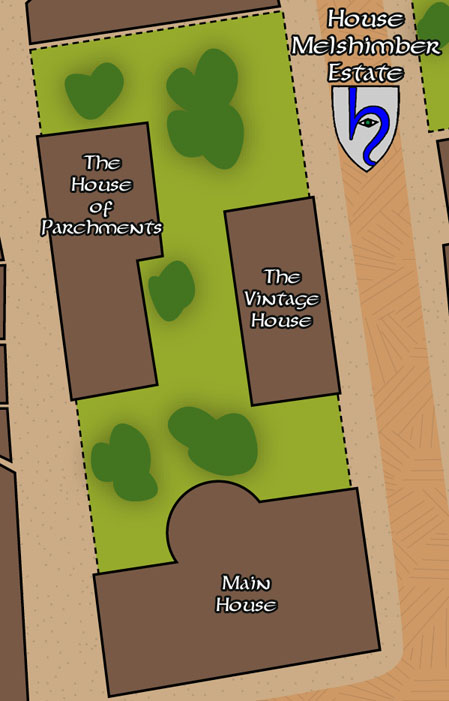 Sea Ward of Waterdeep, Waterdeep
The estate villa of House Melshimber consists of a trio of buildings, with extensively landscaped gardens between them. The whole is surrounded by a fine white-washed wall, decorated with carved interwoven grape vines around quills across the top of it. The buildings themselves are likewise a mist-grey (almost white) stone, and they are fond of decorative stained glass windows - even the regular windows often have a frame of stained glass across their tops and bottoms, usually depicting grape leaves and clusters, books, scrolls, writing utensils and the like.

House Melshimber maintains extensive vineyards around the North and Heartlands, which produce their variety of fine vintages.

Best known for their scholarly pursuits and fine wines, Waterdhavians in the know like to say that the Melshimbers have combined those two interests to master the art of gossip and information-gathering.

House Melshimber is a House of scholars and carousers. They are usually quite well-regarded for their winning charms, their love of (and access to) the finest wines, and as patrons of the arts. Once, the Melshimbers were regarded as intrigue-loving dilettantes and party-goers, but their reputation evolved a somewhat sharper edge for knowing everyone's secrets. To this day, everyone knows: the Melshimbers know.

Where once the Melshimber investment in intrigues was simply a harmless game to engage in between parties and events, now they are nearly a stock in trade. The Melshimbers continue their oldest vocations - that of wine merchants, vineyard owners, and patrons of the arts - but all of those can be and have been turned to the increase of power for Hlanta's House.

By and large, Melshimber scions are involved in sagecraft, wine (either the making or selling of it), and the patronage of the arts in any number of capacities. In many ways, the House as a whole is involved with Hlanta's search for interesting secrets, which she rewards her family and household well for.

Quests undertaken by agents of House Melshimber might include the following:

Scions and agents of House Melshimber in good standing might receive the following benefits: