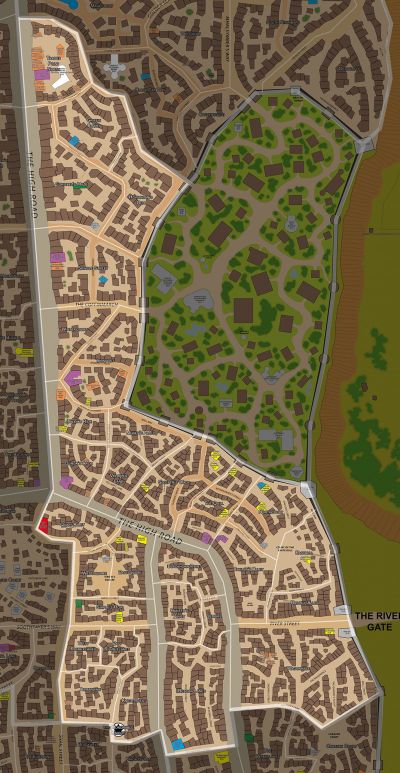 With no distinct look to separate it from surrounding wards, Trades Ward is somewhat lost in terms of neighborhood identity. On the other hand, though it lacks in neighborhood "feel," its sense of community in commerce occupies nearly every building and person within the entire ward. Many of Waterdeep's middle class and merchant class live and work here.

The busiest of wards due to all the constant commercial work within its boundaries, Trades Ward is active day and night, requiring excessive streetlights (many merchants say that Trades Ward at night is beautiful, "when her streets are filled with the stars of Waukeen"). The Guild of Chandlers and Lamplighters keeps a triple shift here at all times of the night, its streets filled with the bobbing lanterns of young lamplighters; the only more frequent sights in Trades Ward at night are the large and frequent watch patrols. While cursing, shoving, and minor street tussles are typical behavior within this business district, the worst criminal offenses are theft, vandalism, and destruction of private property - the watch patrols are more often needed to protect thieves from angry merchants than to stop robberies!

The ward boundaries are defined by the city walls and the City of the Dead on the east, and Andamaar's Street to the High Road on the north. The High Road and Snail Street border it on the west until Shesstra's Street cuts east to the Way of the Dragon where it links with the northern boundary of Southern Ward. Due to its central nature and rambling boundaries, it is hard to traverse the city without passing through this ward at some point.

Trades Ward's architecture is not any different from those wards it abuts. Therefore, depending on one's place in the ward, one can expect old stone and timber row houses and tenements, stone-walled villas converted to restaurants and vaults, or the high wattle-and-daub buildings that run three- and four-stories high above the High Road. The streets are always congested with carters, messengers, and customers. The cobblestone and corduroy streets are well worn from the heavy foot traffic, but the streets can only be swept at night when traffic is reduced to manageable flows. Still, debris and refuse are not a problem; often what one person casts away is claimed by another to sell (within reason, as certain things such as ale, ink, or spoiled food cannot be reclaimed).