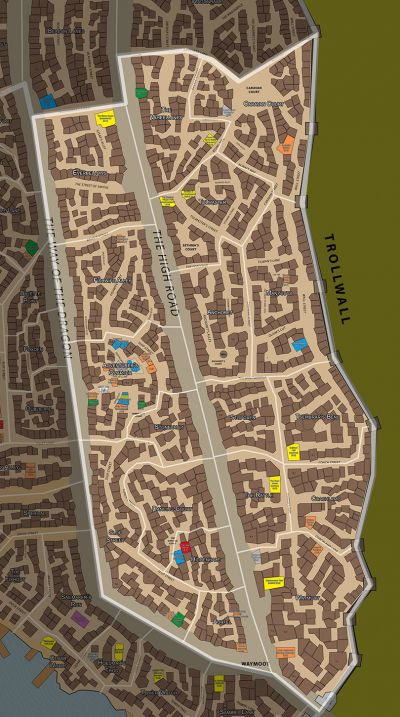 Southern Ward, known as South Ward to all natives, is the first ward seen by most visitors who enter the city through the South Gate or the River Gate with the caravans. As much of its business caters to the caravan trade, it is sometimes called Caravan City with its plentiful forges, smithies, stables, warehouses, and sheds (with coaches and carts for hire). Many common and poorer folk dwell in South Ward, though the caravan trade allows for some local merchants to attain near-noble status (at least in monetary terms). It is often dusty and grimy from the traffic from overland trade, but this area and its people are mostly friendly and industrious, catering to every need of visitors and merchant-traders. Tourists and visitors rarely idle around to look into wagons and warehouses (unless it is their business to do so), but the presence of guards (both privately hired and those in the watch) is obvious and lends much to the feeling of security about the trade goods and the businesses herein.

One of the smallest wards in the city, South Ward had probably the least to do with the internal politics (both social and monetary) of the city beyond the overland trades. South Ward is, for the most part, the ordinary or commoners' side of Waterdeep. The main streets within the ward are the Way of the Dragon and the High Road. The Way of the Dragon forms the southern and western boundaries of South Ward, and the Troll Wall is the eastern boundary. The northern boundary consists of a mix of streets and alleys: Telshambra's Street, a little bit of the High Road, Sahtyra's Lane, Caravan Court (all of which is deemed to be in South Ward), and Belzer's Walk.

South Ward's primary buildings tend to be tall, old stone, mud brick, and timber warehouses. Crowded among them are three- or four-story tenements, nearly all with shops at street level. Trees and even bushes are few, being detriments to the constant traffic; the ever-present dust and mud that accompany caravans are plentiful, but the buildings and foot traffic areas are kept clean. Everywhere in South Ward the rumble of cart wheels can be heard, just as the wastes of the draft animals are the predominant odor on the breeze. The many stables are often just covered pens, though some are sheltered by multifloored buildings over them (like inns or warehouses).