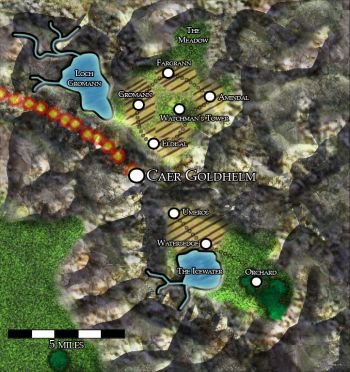 Before the coming of humankind and the halflings, and even before the Clansrule, when the Peak was the Crownhold of the one true Dwarf-King, Oldengar's fed the citadels. Two small mountain valleys, largely secluded and inaccessible to the surrounding mountains, the valleys have long been agricultural breadbaskets for the dwarves of the Starfrost Mountains. Their traditions are old and well-established, and half the families who farm these lands are dwarves (who tend to be a minority in the other rural locales).

There are two gates that lead out of Caer Goldhelm: one for the North Valley, and the other for the South Valley.

The North Valley is the oldest settled portion of Oldengar's Valley, responsible for feeding many dwarven generations.

A newer valley, the South Valley was settled during the end-days of the Clansrule.