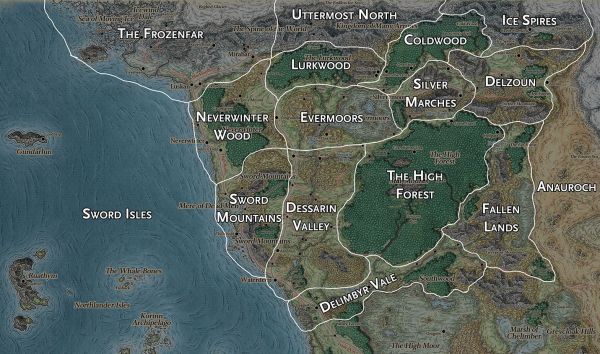 The lands beyond the Delzoun, close to the roof of the world, the Coldwoods are all pine forests and tall, frozen mountain ranges, home to giants and a small reclusive kingdom of folk who are descended from giants.

Forming much of the southern border of what is considered the North, the Delimbyr Vale is mostly defined as the lands between the High Moor and the High Forest, a long stretch of fertile river valleys. The Vale has a scattering of small villages and towns along it, all connected by roads and rivers.
Cities: Llork • Secomber

Ancient dwarven lands, Delzoun includes the very southern edges of the Ice Mountains, all of the Rauvin Mountains, and the eastern half of the Nether Mountains, and the valleys that lie between those peaks. Even its small human populations have a distinctly dwarven tinge to their culture here.
Cities: Citadel Adbar

Between the coastal Sword Mountains and the High Forest lies the Dessarin Valley, a rich river valley of hills and grasslands. A major trade thorough-fare for the North, most routes from one part of the North to another pass through the Dessarin.
Cities: Westbridge • Yartar

Encompassing the high, cold Evermoors wetlands and the Surbrin Hills to their west, the Evermoors are dangerous frontier lands with a tough, hardy people. It has a variety of settlements along the River Surbrin that runs like a spine through this area, and is home to more than one tribe of the Uthgardt.
Cities: Nesmé

These lands south of Delzoun between the High Forest and the Anauroch desert are largely wild and unsettled. Between the Graypeak Mountains and the Far Forest, this part of the North is untamed and home to dragons and all manner of monsters not seen in more civilized areas.

Between the Evermoors and the Spine of the World Mountain range lies the Frost Hills and the Lurkwood. Most of the folk found here are Uthgardt, and they are home to many monsters and tribes of orcs and goblins as well. Though the surrounding settlements do their best to occasionally send forces to limit the danger this area presents, they only curb it at most.

North of the Neverwinter Woods lies the so-called Frozenfar, as the lands to the south, west, and north of the western Spine of the World. Though a source of many riches, these lands are harshly cold, with summer never even reaching its mountain peaks. The people who live here are a hardy, independent-minded folk.
Cities: Ironmaster • Luskan • Mirabar