From OakthorneWiki
Jump to navigationJump to search
Auburn
At A Glance 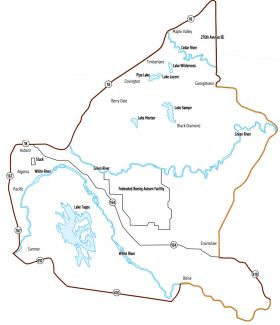 Auburn is a blue-collar district. It is a major manufacturing center, notable for the "Auburn Hum," the incessant noise of manufactories that run twenty-four/seven. There are more than four hundred such facilities, including factories, metal refineries and petrochemical plants. The manufacturing industry provides the vast majority of the district's jobs.

The center of the district has gone downhill fast in the last twenty years. Its once-impressive luxury apartment complexes have been gutted and turned into smaller housing for the working poor.

Largely manufacturing area extending from Lakes Morton and Sawyer to the Green River.

Bedroom community with several small factories that operate without the din and mess of many of the district's other facilities.

A massive facility that features - in addition to its many corporate research buildings, business offices, warehouses, and hangars - a small museum of air history that is open to the public during daytime business hours.

A tiny "city" of six square blocks created by a legal loophole. Owned and mayored by one Mitchell Stuck. A known center for the local black market.

Extensive corporate facilities and factories on the eastern side of White River.

Auburn has no major gang presence.

Various small gangs along Route 18 and Route 14, and on Sumner near Puyallup border or downtown near Tacoma border.

Seattle in the Shadows
Retrieved from "https://www.oakthorne.net/wiki/index.php?title=SR_Seattle_Auburn&oldid=37567"