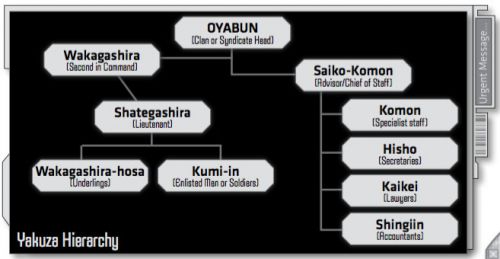 Within the yakuza, there are a handful of positions within the hierarchy of each of the kumi or kai. These are:

The ranks of soldiers are overseen by the wakagashira, or by a shategashira if they are operating a branch of the kumi distant or separate from that of the main clan's operations.

The staff are overseen by the saiko-komon.

Three gumi operate out of Seattle, and all three of them are part of the Shotozumi-gumi. They have effectively divided up Seattle's districts among themselves, though there is always the occasional sniping and poaching at the edges of things.