An ore-rich world claimed by the Tiliq Mining Consortium. Though the Consortium has several facilities on the planet, they also sell commissions for others to set up operations there as well, charging high prices for the possibility of making a great deal of money. Tiliq is home to several barebones mining commune-colonies, groups of people who all pitch in to purchase the commission and work the mines, ideally splitting the profits (when there are any).

The Empire maintains what might be at best called a token presence on Sacaya.

Sacaya is made up of mostly of canyons and razor-topped outcroppings of rock scoured into whirling patterns by grit-heavy winds. Water is present in the world mainly in standing pools, mineral-heavy after successive evaporation cycles. Moisture-farming supplements most of the mining here, and every mining installation that isn't supported by the Consortium is surrounded by multiple moisture farms. Cavern-farming is also fairly common, taking advantage of moisture accumulation in cavern areas out of the red sunlight, with grow-lights bolted directly to the ceilings of the caverns.

Laying claim to the most prevalent natural sources of water, the Tiliq Mining Consortium has built its mining installations in close proximity to the thick cluster of salt lakes of Sacaya.

A low-slung canyon with high walls that shield most of it from the winds that blow in off the Salt Abyss, Ghomak Canyon is home to many of the freeholders in Sacaya. Its mines are nowhere near as finely equipped as those of the Tiliq installations, but the folk who work them are there freely (even if it is something of a last resort for some unfortunate souls).

Originally discovered and settled by ore raiders, the settlements of Vhosa Canyon eventually settled into a somewhat law-abiding culture, effectively casting out those wilder, more violent elements from their number. Though they're no longer a haven where ore raiders can hide, the folk of Vhosa are still the descendants of thieves and murderers, and have a reputation as a bit wilder than Ghomak-folk or Holdings-dwellers. By and large, the mines and hydroponics caves of Vhosa are younger and less developed than those of other places, though they operate and organize similarly.

Approximately fifteen years ago, as Vhosa's ore and crops started showing up in Ghomak for trade, the Tiliq Mining Consortium decided that they were civilized enough to be worth approaching with demands of contractual bindings, including arrears on the lands that (by corporate views) they'd been squatting on for several generations. What broke out was an all-out conflict between Tiliq security forces and mercenaries and the people of Vhosa. The conflict continued for nearly five years before the arrival of the Empire as part of the Pacification of the Kanz Sector. The threat of Imperial interference was sufficient to bring Vhosa and Tiliq to the table, where they ironed out the conditions that the Vhosa settlements exist under today, which please neither side but are workable, at least for the moment.

The great salt flats that take up roughly half of Sacaya's surface are broken up by rocky outcroppings that rise up from the white-orange of the desert sands (which the sunlight casts in a slightly redder tinge).

Sacaya's weather tends toward heat, particularly along its equator. Toward the poles, the weather cools to some degree, and night can become positively frigid at certain times of the year. Rainfall is almost entirely unknown here. Occasionally, salt typhoons blow in out of the Salt Abyss, great whirling storms of jagged scouring minerals. There is a particular time of the year when these happen more often, but they can hit at any time and are frequently many kilometers across. 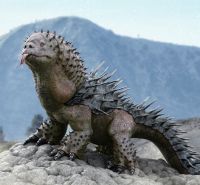 The craggy face of the planet has given rise to a variety of native species, none of which are sapient. The Crag-hunter is a low-slung lizard-like beast with a sinuous snaky tail that it uses to propel itself through loose sand that settles in the bottom of deep canyons. Crag-hunters lay in rocky crags filled with sand and wait for something to stumble by, bursting up out of the sand and making quick work of it with a toxic bite (toxic not because of venom, but because of how enzyme- and bacteria-ridden its mouth is).

The Sacayan roc is a massive primitive bird, with jaws and teeth rather than beak. Standing between three and four meters, with a wingspan several times that, they are mighty hunters who sail the thermals of the hot red planet. When they see prey, they fold their winds and dive bomb it, landing on it with both clawed feet, stunning with the strike. It then carries away its stunned prey, dropping it from a height if it wakes and starts struggling. They are capable of fighting on the ground, but prefer their dive-bomb methods of hunting to standing and fighting.

There is also a canid-type creature referred to as a cliff-wolf, so named for its billy-goat-like ability to scale sheer cliffs. The locals have tried to domesticate them, but no one has had anything more than modest success at the endeavor. Cliff-wolf fur is highly prized, especially toward the poles.